posted on May, 14 2016 @ 10:45 AM
link
Well we know our Sun is Bright and very Energetic do not look with our naked eyes or through any unfiltered lenses.. 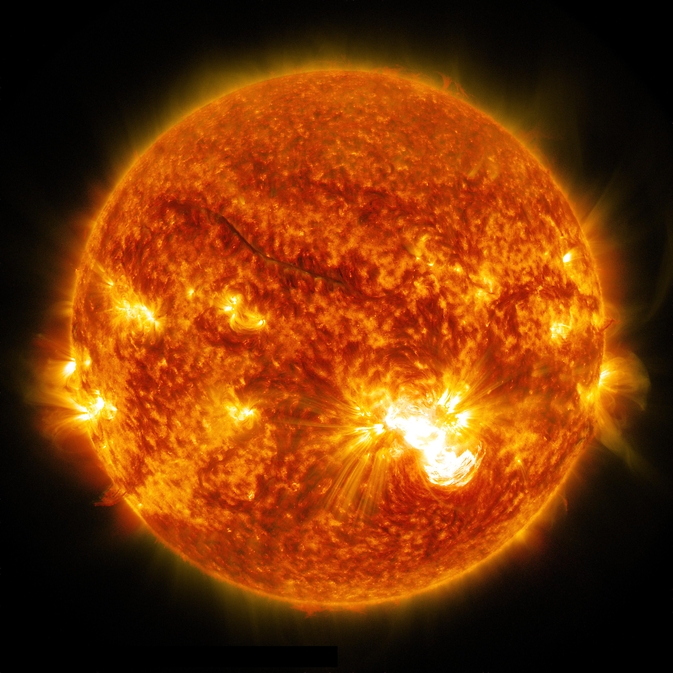 Our Sun is just a speck when compared with the Supergiant Stars known..


Astronomers have been viewing a ball of hot gas billions of light years away that is radiating the energy of hundreds of billions of suns. Even in a discipline that regularly uses gigantic numbers to express size or distance, the case of this small but powerful mystery object in the center of the gas ball is extreme. At its heart is an object a little larger than 10 miles across. ASAS-SN-15lh, as the object is known, was twice as luminous as any previously seen, far brighter than any normal supernova, and outshone our entire Milky Way galaxy by 50 times. Astronomers were not entirely sure what it is. If, as they suspect, the gas ball is the result of a supernova, then it's the most powerful supernova ever seen. The artist’s impression below shows what it would look like from an exoplanet 10,000 light-years away in its home galaxy. Scientists reported this past January that the object at the center could be a very rare type of star called a magnetar--but one so powerful that it pushes the energy limits allowed by physics. An international team of professional and amateur astronomers spotted the possible supernova, now called ASASSN-15lh, when it first flared to life in June 2015. The gas ball surrounding the object can't be seen with the naked eye, because it's 3.8 billion light years away. But it was spotted by the All Sky Automated Survey for Supernovae (ASAS-SN, pronounced "assassin") collaboration. Led by Ohio State, the project uses a cadre of small telescopes around the world to detect bright objects in our local universe.

Not much is known about a Millisecond Magnetar here is a short 1.33m Video explaining a millisecond Pulsar with a super fast spin.

It seems that Magnetars do not spin as fast as Pulsars.. So I presume a not Pulsing but super fast spinning, Super bright (1000/Sec ) Neutron star
is Special..

For my next life please make this a possibility.

Thank you for an interesting thread, "nothing i didn't knew" but always exciting, love the size of those stars comparison

Magnetars and Gamma Ray Bursts Niccol`o Bucciantini INAF, Osservatorio Astrofisico di Arcetri, L.go Fermi 5, 50125, Firenze, Italia email: niccolo@arcetri.astro.it Abstract. In the last few years, evidences for a long-lived and sustained engine in Gamma Ray Bursts (GRBs) have increased the attention to the so called millisecond-magnetar model, as a competitive alternative to the standard collapsar scenario. I will review here the key aspects of the millisecond magnetar model for Long Duration Gamma Ray Bursts (LGRBs). I will briefly describe what constraints present observations put on any engine model, both in terms of energetics, outflow properties, and the relation with the associated Supernova (SN). For each of these I will show how the millisecond magnetar model satisfies the requirements, what are the limits of the model, how can it be further tested, and what observations might be used to discriminate against it. I will also discuss numerical results that show the importance of the confinement by the progenitor star in explaining the formation of a collimated outflow, how a detailed model for the evolution of the central engine can be built, and show that a wide variety of explosive events can be explained by different magnetar parameters. I will conclude with a suggestion that magnetars might be at the origin of the Extended Emission (EE) observed in a significant fraction of Short GRBs.

posted on May, 14 2016 @ 04:42 PM
link
Still Looking. Not much information on a Millisecond Magnetar. ( What no You Tube entry as yet )
I find the Figures above fascinating. Here is a you tube on Magnetar flares 6.23M.

Unfortunately, I have a sneaky feeling that you already do live in a time of FTL speed, it's just being kept from you - and us all.

posted on May, 15 2016 @ 01:51 AM
link
Yeah, we usually think of the Sun as extremely bright, but in fact some natural or man-made phenomena here on Earth can be brighter than the Sun. For example, the welding arc, a nuclear/thermonuclear explosion, or even a large meteor like the Chelyabinsk one.

Magnetars and pulsars aren't stars, though, so I consider them a special case.

An international team of astronomers, led by Peter Brown of Texas A&M University, has spotted a surprising ultraviolet (UV) rebrightening in a distant superluminous supernova known as ASASSN-15lh. The event has baffled the scientists as it doesn't show any hydrogen emission characteristic of superluminous supernovae and tidal disruption events. Read more at: phys.org...

Superluminous supernovae, also called hypernovae, are dozens of times more luminous than normal supernovae. ASASSN-15lh, detected by the All Sky Automated Survey for SuperNovae (ASAS-SN) in 2015, is a real 'assassin' among these explosion events. It is about 200 times more powerful than the average supernova and approximately 570 billion times brighter than our sun. It is so far the most luminous supernova ever detected. Read more at: phys.org...

Abstract
We present and discuss ultraviolet (UV) and optical photometry from the Ultraviolet/Optical Telescope (UVOT) and X-ray limits from the X-Ray Telescope on Swift and imaging polarimetry and UV/optical spectroscopy with the Hubble Space Telescope (HST) of ASASSN-15lh. It has been classified as a hydrogen-poor superluminous supernova (SLSN I) more luminous than any other supernova observed. From the polarimetry we determine that the explosion was only mildly asymmetric. We find the flux of ASASSN-15lh to increase strongly into the UV, with a UV luminosity a hundred times greater than the hydrogen-rich, UV-bright SLSN II SN~2008es. A late rebrightening—most prominent at shorter wavelengths—is seen about two months after the peak brightness, which by itself is as bright as a superluminous supernova. ASASSN-15lh is not detected in the X-rays in individual observations or when the data are summed into two separate bins for the early phase and the rebrightening. The HST UV spectrum during the rebrightening is dominated by the continuum without broad absorption or emission lines. In particular, we confirm a lack of hydrogen emission, showing only Ly-alpha absorption near the redshift previously found by optical absorption lines of the presumed host. The UV spectra lack the broad features seen in SLSNe or tidal disruption events and the early optical spectra of ASASSN-15lh. The extreme properties of ASASSN-15lh and differences when compared to SLSNe and TDEs make its classification as a SLSN uncertain. Read more at: phys.org...

originally posted by: Mianeye
I wish i lived in a time with FTL space travel, so much to see, learn and discover.

As long as you don't discover the old man in the sea. Some ancient race that really hates your ass.

Then discovery would suck ass. And you'd learn you ought to have stayed at home.

It took awhile for me to wrap my brain around this.


originally posted by: Mianeye
I wish i lived in a time with FTL space travel, so much to see, learn and discover.

As long as you don't discover the old man in the sea. Some ancient race that really hates your ass.

Then discovery would suck ass. And you'd learn you ought to have stayed at home.

Anything smart enough within our local space already knows we're here, and that we're cleaver, but nuts. If theyre planning on obliterating our loony space monkey asses theres not much we can do anyhow.

So the old man in the sea probably saw us coming a long time before we detected him.

Personally, I feel if we do have ftl, its important until we become essentially an unstopable technical juggernaut that can fend off folks out there wary of our psychotic species quest for galactic colonization and or conquest to lay low.

Better to appear, for now, like someone who can play with others in the sandbox and pass for normal before they realise what a bunch of dangerous damaged goods humans really are.
edit on 19-5-2016 by BASSPLYR because: (no reason given)