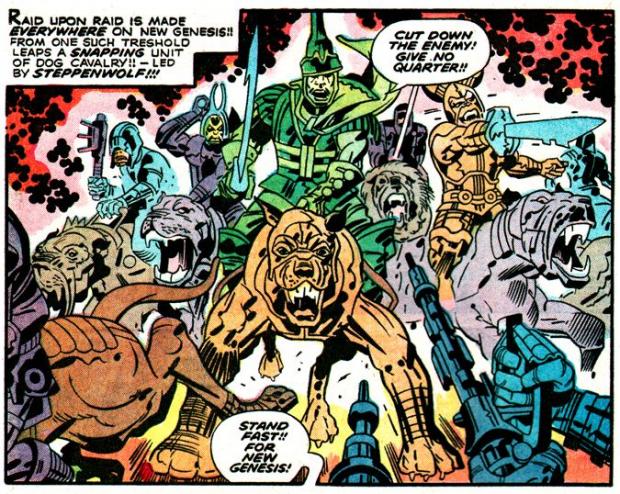 So rumors seems to be true the new super villain of the franchise movie will be Darkseids Uncle, The notorious Steppenwolf

Introduced in 1972, Steppenwolf has been a recurring villain in the DC universe, and while the name holds more importance to the general population as a rock band than an alien warrior, rest assured, he’s a powerhouse. Many believe that he was the one who appeared in that Batman v Superman: Dawn of Justice deleted scene (more on that later), so him antagonizing the Justice League: Part One heroes would make sense. While it may be a while until Steppenwolf’s inclusion is confirmed, here are the things you need to know about him in case he does end up being the main villain.

Steppenwolf is one of the earliest survivors of Doomsday, the monster who once killed Superman. 245,000 years ago, Steppenwolf takes an Apokolips shuttle with Darkseid, Master Mayhem and a small crew to the planet of Bylan 5. The planet holds delicate natural materials Apokolips needs for weaponry, material which would be destroyed in the event of an invasion. The forcible marriage of Darkseid to the planet's princess comes to an end when Doomsday attacks. Master Mayhem is swiftly torn apart. Darkseid ignores Steppenwolf's orders to use Omega Beams and engages the creature in hand-to-hand combat. Steppenwolf sees the destruction wrought has doomed the planet and all who live on it. He teleports Darkseid out of harm's way, agreeing with Darkseid not to mention this to anyone. Doomsday escapes by stowing away on the Apokolips shuttle

Steppenwolf is part of the series New Gods

As long as Steppenwolf remembers who’s boss, he gets to retain his position of power.
edit on 13-5-2016 by PanPiper because: image

Steppenwolf is part of the series New Gods

The Band? How bizarre.

I thought this had something to do with DC Comics "Justice League" and the band Steppenwolf. As this thread does not seem to be about the band in any way shape or form, but seeing as I have nothing to contribute I guess I'll see myself out.

I love the band.

Songs that come to mind - Magic Carpet Ride, Born to be Wild, The Pusher

The comic book universe can't hold a candle to the name or music of Steppenwolf. It wasn't supposed to be about war or slaying or… comics.


but seeing as I have nothing to contribute I guess I'll see myself out.

LMAO. Man, that was funny. Can I use that beaut?

posted on May, 13 2016 @ 10:24 AM
link
Steppenwolf for Justice League One and Darkseid for Justice League Two. I think this will be a winning combination provided they don't hack it up like they did Batman v. Superman. I am looking forward to the DVD release to see how the 3 hour movie looks compared to the theatrical release. I have a feeling the DVD will be a lot better.

The comic book universe can't hold a candle to the name or music of Steppenwolf. It wasn't supposed to be about war or slaying or… comics.

Hmm, perhaps the character is named for the Hesse novel, just as the band was?

The book, the band and the film (Easy Rider) is devolved to DC Comics to come to its lowest ebb. I was unfamiliar with the book, googled it. Interesting, written in Germany just prior to the rise of the Nazi State.

…the novel was named after the lonesome wolf of the steppes. The story in large part reflects a profound crisis in Hesse's spiritual world during the 1920s while memorably portraying the protagonist's split between his humanity and his wolf-like aggression and homelessness.


More pertinent to the movie about the hippie movement in the US. The lone, long hair, anti establishment biker, recluse, relegated to roadside camping (like the author Hesse).

I'll take those masterpieces over comics anyway. Disillusioned by the comic world taking over every bygone human aspiration. Thanks for directing me to the book.

Popular interest in the novel was renewed in the 1960s – specifically in the psychedelic movement – primarily because it was seen as a counterculture book, and because of its depiction of free love and explicit drug usage. It was also introduced in many new colleges for study, and interest in the book and in Hermann Hesse was feted in America for more than a decade afterwards.


Little to do with warring and "justice leagues" or whatever. 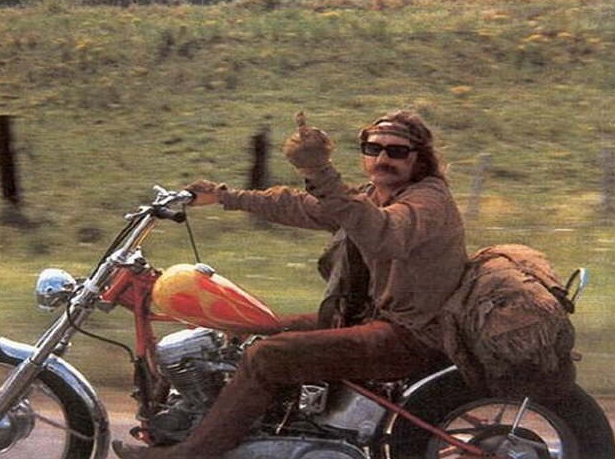