posted on May, 12 2016 @ 09:49 PM
link
The US Navy has flown nine flights to date with a modified P-8A Poseidon, testing inflight refueling capabilities from the Edwards AFB NKC-135. As much as 10,000 gallons of fuel has been transferred in one flight. Data from the flights is being used to develop a high fidelity flight simulator for crews.

They are also testing the multi-static active coherent sub search system, and Mk.54 high altitude torpedoes. MAC testing is scheduled for six months, depending on submarine availability, and release tests are scheduled for the Mk.54 by the end of summer.

JACKSONVILLE, Florida – The P-8A Poseidon has started air-to-air refueling testing and is on course to test its multi-static active coherent (MAC) anti-sub search system and High Altitude ASW (antisubmarine warfare) Weapons Concept Mk. 54 torpedo and high-altitude sensor upgrades.
“We have an aircraft at Edwards Air Force base,” U.S. Navy Capt. Tony Rossi, program manager, said last month. “They’ve been out there a week and a half, doing air-to-air refueling. We’ve been testing with KC-135 from the Air Force. We’ve done nine flights so far. The testing had gone very well – we’ve passed 10,000 gallons of fuel on a flight. The primary focus has been on the flying qualities of the aircraft.”

The Navy is now using the data to help develop a high-fidelity P-8A air-to-air refueling trainer, he says. 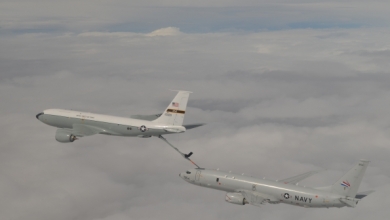 posted on May, 12 2016 @ 10:12 PM
link
Hey interesting article. Quick question. Why dont they use mk48s. Cant they be modified or saboted to be able to be launched from a p8 or are they just too heavy or old to modify. Cause a mk48 is one lethal sob

The Mk 54 is a lightweight torpedo designed to operate in littoral areas. It weighs a little over 600 pounds, compared to 34-3600 pounds for the Mk 48.

posted on May, 13 2016 @ 01:38 AM
link
I understand that the Poseidon is anti submarine, along with anti surface, shipping interdiction etc.

So what armament would it use to dispatch a SSN in blue water? Would the mk54 have the capability to take one down or is it limited to brown water and littoral areas? Cause a mk48 would do the blue water job, is it just that the plane cant mount one?

Finally is the Poseidon's mk54 loadout mainly for surface littoral ships, or is there a growing or emerging threat from small diesel and or mini/drone subs prowling littoral regions?

Just wondering if the mk54 points to a shift in the type of subs the Poseidon is now faced with hunting? (I already know that as far as surface warfare, littoral is the new hot thing)
edit on 13-5-2016 by BASSPLYR because: (no reason given)

The Mk 54 has been in use since 2004. It doesn't represent any changes in doctrine or what they're planning on chasing. It was designed to be launched from smaller launch platforms than the Mk 48.

Like Zaph said, the MK-48 is too heavy. The P-3 didn't carry the MK-48 either and the MK-48 was designed specifically to be fired from subs against other deep diving boomers.
The MK-54 is good enough to take any surface ship or shallow sub. out of the fight and they can carry 5 of those to only one MK-48 if they somehow modded the jet to carry them.

Next question the p8 . She's a big bird so obviously she will have to be land based and rely on aerial refueling to get around to her patrol areas. Aircraft carriers usually have heafty anti submarine defenses in the manner of protective surface ships and subs patrolling as part of her task force or whatever.

Is there a carrier based anti submarine aircraft that they are using for short range to augment the other defenses or perhaps patrol areas the p8/3 cant be tasked to for whatever reason. Or is that simply not a need for the navy right now due to the robust defenses surrounding a carrier already.

SH-60s. The P-8 actually doesn't need air refueling for a normal mission. It's got enough range to get something like 1200 miles out and back. But with the addition of a receptacle they can stay on station much longer.

Hey forgot about the Seahawks.

I know the b model came first and that there are more of them. But later they came out with the f model. They bought less of the f model and from what I can tell its more or less the same as the b model except it has a dipping sonar instead of launchable sonar buoys.

Are there any other differences between the b and f models and whats the pros and cons between the launchable bouys and the dipping bouys besides the dipping is reusable. Why go with one or the other?

Finally, the orions and Poseidons are high flying as opposed to low flying like a helicopter. Besides the relative stealth factor of being higher up and away from the subs they are hunting. Obviously an ability ti cast a wide and more penetrating net. What are the advantages of a land based sub hunter over a short range ship based sub hunter. And vice versa.

Do the navy basically use the helos to augment the protection of the carrier exclusively. And the p8/3 only used for patrolling areas away from the task forces? What im saying is do the missions overlap or are they kept essentially exclusive. Copters protect the immediate area of the carrier where as the planes patrol/monitor elsewhere?
edit on 13-5-2016 by BASSPLYR because: (no reason given)

I think you are correct in that the carrier based anti sub assets are mainly for task force fleet defense. P-8's and P-3's cover the areas the fleet aircraft can't and act as a second tier layered defense for the fleet. The third tier would be satellite large area coverage. The P-8's and P-3 also have a SIGINT mission that the carrier based aircraft aren't as suited for.

The sonobuoys are a general area system, while dipping sonar is for fine tuning.