posted on May, 4 2016 @ 11:29 PM
link
Anyone remember how Jesse Ventura shocked the world and became Governor of Minnesota in 1998? Doesn't it seem like kind of a miracle in retrospect? It may have been his running mate that was the key. He selected teacher Mae Schunk as his running mate. 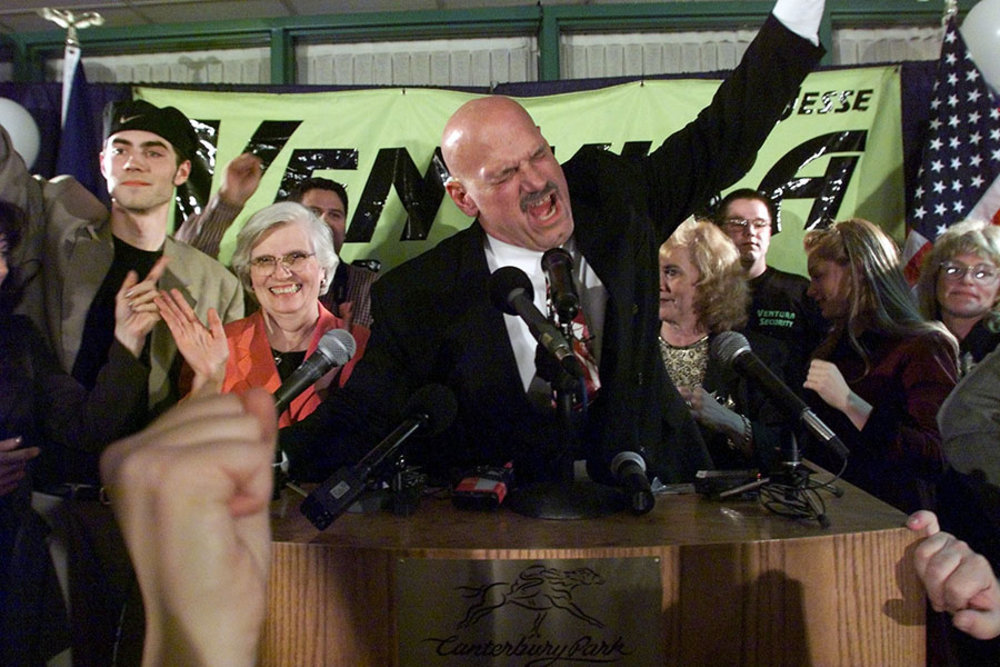 You can see her in the picture above. She's the one in orange. What a perfect way to take the edge of off Ventura's personality and make him palatable to the masses, don't you agree?

Many people are saying that Trump needs a qualified woman to do exactly the same thing that Ventura accomplished with Schunk. Trump may have found it:

A senior Trump campaign source said Wednesday that the campaign's early favorites for vice president are now New Mexico Gov. Susana Martinez, South Carolina Gov. Nikki Haley and Sen. Rob Portman of Ohio.
And Trump, in an interview with CNN on Wednesday, added another name to the list: Ohio Gov. John Kasich, who is expected to drop out of the race Wednesday afternoon.

One governor who said she was "behind Donald Trump 100 percent" was Oklahoma Gov. Mary Fallin.

"I have not had any direct contact with Mr. Trump, but I would be very honored if I were to receive a call saying I need you to help make America great again," Fallin said in a statement regarding the VP speculation.
Trump begins weighing VP options

When I saw a picture of Fallin, I immediately thought of Ventura/Schunk. Look at Trump and Fallin together: 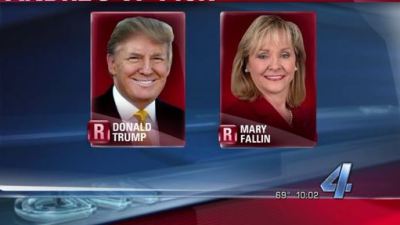 Is it not perfect?

Fallin wants to be Trump's VP. This should be a slam dunk under the circumstances (Fallin is probably as good as Trump can get anyway).

South Carolina Lt. Gov. Andre Bauer, a Trump supporter, said on CNN's "State of the Union" that Fallin would be a great choice.
"I think you're going to see something different. I think what he will do is he won't go with the norm that you pick a battleground state and you pick somebody from that state or a rival candidate," he said. "I think he's going to say, 'Who can help me get the job done?' and I think he needs some balance, and I like Mary Fallin for that reason."
Trump: Oklahoma governor as VP is 'great' advice

posted on May, 4 2016 @ 11:50 PM
link
Rob/Rand Paul and or the very unlikely outsider Bernard Sanders himself would guarantee the presidency. I doubt any of them except Rand Paul would even pick up the phone.

OKLAHOMA CITY (AP) — Gov. Mary Fallin has signed into law a bill that allows ministers to refuse to perform same-sex marriages if such marriages conflict with their religious beliefs.

Fallin said Friday that the law will protect the constitutional and religious rights of Oklahomans.

The law says no licensed, ordained or authorized official of a religious organization can be required to solemnize or recognize a marriage that violates that official's conscience or religious belief.
Gov. Mary Fallin signs bill allowing Oklahoma ministers to refuse to perform gay marriage

I don't think that's necessarily a problem for Trump because pro-gay rights people probably would never vote Republican anyway. In fact, having someone who's perceived as anti-gay rights could be a plus in terms of winning over the more extreme conservatives.

Just look at Trump and Fallin together:

H.R. 1838 (111th): To amend the Small Business Act to modify certain provisions relating to women’s business centers, and for ...
... other purposes.

Replaces the five-year projects for the benefit of small businesses owned and controlled by women with a three-tiered program of five-year (first tier), three-year (second tier), and three-year (third tier) projects, with each tier commencing after the previous tier is being completed. Allows the maximum award of assistance ($150,000) for first-tier projects that possess the capacity to train existing or potential business owners in the fields of green technology, clean technology, or energy efficiency. Revises matching funds requirements for all projects. Authorizes appropriations.


Hmmm....Mary Fallin sponsored this amendment so she may not be so far right in her party that women, moderates, and liberal green party voters will ignore her. Though, I will hold off on detail research until a VP is actually selected. I was just curious, since I didn't know who she was.

Source and other bills sponsored link

Sadly, you highlight the unfortunate depth most people have when choosing our leaders. Looks are more important than substance.

On Wednesday, Gingrich told Fox News' Greta Van Susteren that he'd listen if Trump wanted to talk to him about it, but he figures he has a "1000 to 1" chance of being picked.

But Gingrich has several suggestions for Trump, and many of them are women, as "it's obvious you look at it and you're trying to beat Hillary Clinton, you at least think about whether or not that's who you want."


Martinez and Haley have both said that they aren't interested in the position.

BREAKING: Nikki Haley Says, “Cross Me Of The VP List”

It looks like Gingrich is hinting at Fallin being the choice.

originally posted by: introvert
a reply to: Profusion

Sadly, you highlight the unfortunate depth most people have when choosing our leaders. Looks are more important than substance.

I've learned the hard way about what people really seem to care about. It's not new, many people think Kennedy beat Nixon because of his looks.

I was reading about Iowa Senator Joni Ernst, and frankly I think she could lock the woman vote better than anyone considering her accomplishments as a woman struggling up the ladder of leadership.

Ernst is the first woman to represent Iowa in the United States Congress and the first female veteran—from any state—to serve in the U.S. Senate.

Ernst served as a lieutenant colonel in the logistics branch, commanding the 185th Combat Sustainment Support Battalion at Camp Dodge, the largest battalion in the Iowa Army National Guard.[11][12] Upon her retirement from the military in 2015, Ernst had served 23 years between the Army Reserve and the Army National Guard.[1] She spent 14 months in Kuwait in 2003–04 as a company commander during the Iraq War.

Ernst received widespread attention for a campaign advertisement she released in March 2014 where she employed a tongue-in-cheek comparison between her experience castrating pigs and her ability to cut "pork" in Congress.

This lady is tough as nails, and knows the international arena, especially the MidEast considering she SERVED THERE!

She has advocated eliminating the Department of Education "not just because it would save taxpayer dollars, but because I do believe our children are better educated when it's coming from the state."


This is mirrors Trumps position on minimum wage laws. So states rights are a serious concern to these candidates, and they should be for all Americans.

Ernst has expressed her support for allowing law-abiding citizens to "freely carry" weapons but abide by rules against carrying in public buildings like schools.[45] In February 2013, Ernst co-sponsored a resolution addressing "the Iowa General Assembly's refusal to recognize or support any statutes, presidential directives, or other regulations and proclamations which conflict with the Second Amendment of the Constitution of the United States and which are expressly preempted by the rulings of the United States Supreme Court”

As an Iowa state senator, Ernst co-sponsored resolutions concerning state nullification of federal law. One such bill asserted that Iowa could ignore any federal laws which "are directly in violation of the Tenth Amendment,"

I Can't argue that at all!
I like this lady, I can live with her as President! But I will settle for VP, or maybe a different Sr. Staff position.