And there is no anti-white agenda...

AUSTRALIAN television and radio we have a problem — and it’s a big white one.

That is the view of a leading expert in multicultural affairs in the wake of the news that the national broadcaster, the ABC, is looking for a “healthy mix of ethnicities and accents” in its shows and coverage.

University of Technology, Sydney, sociology professor Andrew Jakubowicz said the only time we saw diversity on Australian airwaves or radio was when it took place on reality television shows.

With the exception of multicultural broadcaster SBS, the ABC and commercial networks had few voices of difference and failed to represent and reflect what Australia was about, he said.

According to Prof Jakubowicz, new ABC boss Michelle Guthrie calling for more diversity on air is a positive step forward, however he was unsure whether it would actually happen.

Prof Jakubowicz said the lack of diversity wasn’t restricted to the ABC, which at least heavily promoted indigenous programs and voices.


Why The Voice, MasterChef are the real face of Australian TV

On the surface, you could say this is just in individual with an opinion who has the right to speak freely and be heard by others. After all, since Australia is a multicultural country, shouldn't the entertainment industry consist of a diversity of races/ethnicities/cultures? It all seems rather innocent. Minorities simply want representation in the entertainment media, right?

When one delves a little deeper into the issue, you can clearly see that behind the vale, what people like this want is not diversity itself, but rather less white people in positions of influence/dominance. If the entertainment industry consisted of 90% Indians for example, there would be no calls for more diversity. If 80% of actors were of Asian heritage, there would be no calls that it is too Asian. Only in predominantly white populations are things too white and not diverse enough.

The key point is that while white people living in predominately white populations might generally have things pretty good, there is an underlying sense of resentment toward white people based entirely on their skin pigmentation. One would have thought such an attitude in the year 2016 would be discouraged, not actively supported as progressive and diversifying.

(Queue accusations of closet racism, xenophobia, ATS becoming like storm front, poor white heterosexual male complaining about how tough he has it, blind to the white privilege I enjoy, etc.. Did I miss anything?)

clevargenuis
+11 more
posted on May, 2 2016 @ 11:58 PM
link
not white but I can see that there is something going on with these calls for multiculturalism ONLY in European countries. Does that make me a racist?

posted on May, 2 2016 @ 11:59 PM
link
So we need more colored people and sexually alternative people on TV, hmmm
I wonder if they represent the population demographics in the real world


www.indexmundi.com...
population of Australia
white 92%, Asian 7%, aboriginal and other 1%

about 2 % of Australians are same sex or gender alternative

As culturally diverse as Australia is/isnt , the media will always aim at what is popular and will garner the most interest to make the most money.
Maybe we should all be Panda bears, black white and Asian, cant help with the gender alternative thing though

There are very few Americans in Australia but lots of US TV, maybe they should stop US programming and make only Australian programs, more Home and Away and Neighbours

Just don't look too fair-skinned and Caucasian for your government job: www.smh.com.au...
edit on 3-5-2016 by halfoldman because: (no reason given)

maybe not an implemented agenda of which intelligent people can identify, but i think there is a movement of which stupid people follow

posted on May, 3 2016 @ 12:07 AM
link
Claims of racism against white people is the new rallying cry of the white racist. Go ahead and tell me I am wrong. All you white people with all your 'proof' are screaming it from the roof tops around here. Whaaa Whaaa wahhhh , oh, those colored folk, they just be out to get us. I'm so sick of it. Quit your crying and grow up.

posted on May, 3 2016 @ 12:11 AM
link
Easy for him to say, most of the blacks in Australia are aboriginal and could probably care less about racism if most even know what it is, black power and white supremacy. There are around 500 different aboriginal "tribes" or "people" and they all have a different language so he is dealing with a different thing. My black friends just don't think about stuff like that, racism is never a subject unless we joke about it, they just roll their eyes. The media has weird agendas. They start all of this crap. The media can start a civil war quite easily if they report on something effectively enough.
edit on 3-5-2016 by MEDIKATED because: (no reason given)

originally posted by: TerryMcGuire
Claims of racism against white people is the new rallying cry of the white racist. Go ahead and tell me I am wrong. All you white people with all your 'proof' are screaming it from the roof tops around here. Whaaa Whaaa wahhhh , oh, those colored folk, they just be out to get us. I'm so sick of it. Quit your crying and grow up.


oh so now its racist if whites complain of racism???

also the op predicted this response. he must be psychic lmao

All you white people 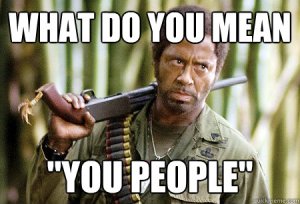 At least you said 'many'. But still, you said many. I know of none. NONE So just how do you come up with this assumption?

Man, I loved that move. And Downey put on a stellar show. Certainly worth an Oscar nomination. I thought he shoulda gotten best supporting for that role. Funny stuff.

originally posted by: Tiamat384
a reply to: TerryMcGuire
Do you not see their videos as they speak? I mean really....you just have to look a little. Glance around quite literally.

Where? Under what rock? Point me there please to some proof that many white social justice warriors hate their own race. Give me a link, give a guy a hand here.

this is one of many

cant quote her exactly, but just watch there is just more then her

Oh yeah, her. I saw that video and is she something else or what. Still, from watching her video here on ATS, was it last night, the night before, I didn't get that she hated her own race, rather that she hardly identified with here 'race' at all. But maybe you are right. I'll go watch that one again. But still, many? What, one percent? Two? Ten percent? How many is many. Some, well sure, I'll go along with that. Hell, there were many black people who hated their own race I guess. So maybe so. Maybe I'm the one under a rock.

And there is no anti-white agenda? Well yes of course there is.

What you do you think diversity means? Diversity means less whites until there is only a token white presence. Have you ever heard the word diversity used when they discuss Muslim countries, or Muslims communities or Muslim religions and churches? Are non whites welcome in Muslim churches as non Muslims?

Not all weapons of war are guns and bombs. Cultural weapons can easily be used to achieve a hidden global agenda. They some of the most effective weapons in use today because people do not suspect that humanistic efforts would be turned and used as a weapons of war.

Look at Sweden, its close to handing over sovereignty of the country to Muslims. Depending on the birth rate statistics you choose to accept, Sweden will become a Muslim states in about 10+ years.

Diversity is a weapon of war, make no mistake. Start making a note of when you hear the words diversity and tolerance get used by politicians, social commentators, shock jocks etc.

You think I'm racist? start paying attention to when and where the words diversity and tolerance get used in the country.

In relation to the OPs post all that is happening in Australia is that they are rolling out what has now been implemented in the US. This is also happening in the UK now too from what I read.

australia has some diversity with its reality shows, why not have some of that in normal programming? do like we do in america, throw in your token and keep that ish movin!

Consider the source, a sociology professor, working at what can probably only be described as a leftist, liberal University, a professor who himself is doubtless a leftist. And this Professor hopes to get tenure, or to be promoted within the Administration and to do that he must constantly flaunt and polish his liberal credentials. Think about it this way, who is his audience? He was proudly burnishing his credentials, flying his flag, to his cherished leftist, liberal colleagues.

How does demonstrating that there is an anti-white agenda in motion equate to "taking the bait"?