Makemake, the Moonless Dwarf Planet, Has a Moon, After All 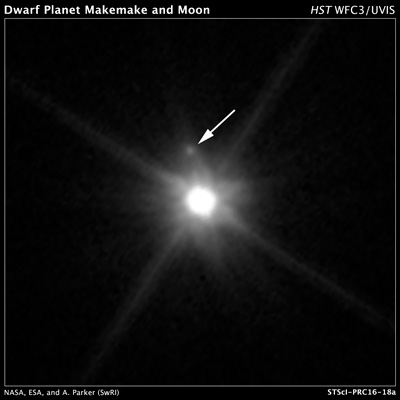 OK so it has a moon.
Why is that so special?

Did the OP or thread say it was special?

Awareness of solar neighborhood is important, for when we truely develop and find a way off this rock we will have a better understanding of what exists in our solar bubble.

But to an average Joe it means nothing

OK so it has a moon.
Why is that so special?

I didn't say it was special. What I said was that Makemake was the only Kuiper belt dwarf planet to not have a known moon -- until now.

In fact, that makes Makemake LESS special than it previously was when it was thought6 to potentially be moonless. Now it is just like Pluto, Haumea, Eris, Quaoar, Salacia and some other relatively large Kuiper belt bodies with moons.

I would think that if it turns out that most of these large Kuiper belt bodies are found to have moons (and I don't yet know if that is the case), then the ones without moons would be conspicuous oddities, and potentially worthy of instigating why they are moonless. An astronomy doctoral student could probably latch on to something like that.

posted on May, 3 2016 @ 08:31 AM
link
I am blown away by how much our knowledge of the solar system has increased the last 15 years. Blown away. It's a privilege to witness all these new discoveries.