posted on Apr, 27 2016 @ 08:45 AM
link
My first rant, and I just realized how sad it is to be politically related. I don't follow politics very closely, so when it comes to the topic I am very much an "outsider looking in".

However, with that mentality, I realized just moments ago while watching a clip of mr cruze why I always found candidate speeches to be so off putting and uncomfortable to watch.

Watching some of these people, I see the same type of rhetoric and pandering that I see with the other two groups I find equally appalling. Cult leaders(or even highly immersed religious individuals) and Televangelists.

But really want made me make the connection, for myself, was watching the people in the background of the video(this was the ted cruze speech another member posted where he ranted about something and then measured the basketball "ring"). Watching the people behind him, I saw the same level of unbridled and uninformed(mislead) zeal that you see in the eyes of the followers of any other cult. Their enthusiasm and the way they bask in the words(shallow and trivial) of their "leader", it made me cringe. These kids(in this video, they were High school age I'm guessing) are trapped. Mislead and lied to, they have been enchanted by the words of a selfish snake oil salesman. It's really quite funny, in a way, but at the same time it's sad.

Just wanted to rattle that out.

Good 'rattle'. We see the sameyoutful zeal at your average college sports match.

Imagine, such energy dedicated to getting little balls through hoops and goalposts.

LOL, I agree. That environment used to always feel pretty weird to me(I rarely attended only when mandatory). It's one in the same, I guess the common denominator is the lack of individual thought.

They do manipulate people this way at school, the military, church, tv, media. We either buy into that system, or not.

I didn't go along with the 'program' either. It didn't make 'sense', to me. Now I'm better for it, I don't have as much entrenched indoctrination messing with my gyros.

Some people never get it. They remain blindly ambitious, clawing their way to the top and running things now. We're in a lot of trouble.

Look in my eyes, what do you see?
The cult of personality
I know your anger, I know your dreams
I've been everything you want to be

Neon lights, Nobel Prize
When a mirror speaks, the reflection lies
You won't have to follow me
Only you can set me free

I sell the things you need to be
I'm the smiling face on your TV
I'm the cult of personality
I exploit you, still you love me
I tell you one and one makes three

Neon lights, a Nobel Prize
When a leader speaks, that leader dies
You won't have to follow me
Only you can set you free

They do manipulate people this way at school, the military, church, tv, media. We either buy into that system, or not.

I didn't go along with the 'program' either. It didn't make 'sense', to me. Now I'm better for it, I don't have as much entrenched indoctrination messing with my gyros.

Some people never get it. They remain blindly ambitious, clawing their way to the top and running things now. We're in a lot of trouble. 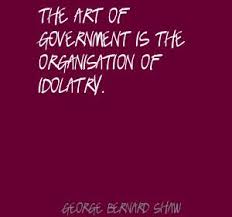 They've mixed a bunch of Trump quotes up with a bunch of quotes from Diary of a Wimpy Kid. You wouldn't believe how hard it actually is.

So if you dislike Cruz for sounding too televangelist ... then what is that saying about Trump?

Them you have Hillary who tries to pander by adopting fake accents like this:

Not only that, but getting back to Cruz and his speech cadence. I was listening to Rush and a guy called in and they had a good laugh over Cruz. The cadence he uses isn't so much televangelist as it is college debate which is what Cruz is. The man called in a pointed out that he taught lots of college debaters and they all are taught to speak in the same manner:

It's a specific cadence used to heighten tension and add the dramatic. I can see where you get his televengalist style out of it because he is using religious language. His campaign was designed to pull in the religious voters especially in the beginning. His triangulation was that those voters did not vote and would have won the election for Romney had they voted. Plus, he happens to be religious himself.

What you should also do is listen to Obama's cadence and then compare him to some of the really good Southern Baptist preachers. They also have a very, very similar cadence. My husband grew up in some Southern Baptist churches and pointed that out right away.

I used the cruz video as a point of reference for my rant, I certainly(for surely, 100 percenty) didn't mean to imply or invoke a political comparison or allude to the fabricated diversity of the political parties.

They are all the same, kind of like the same bag of manure but with different store names branded on them. So I apologize If I implied some sort of personal political preference, or if that wasn't your intent then for assuming you did.
edit on 27-4-2016 by MisterSpock because: (no reason given)

posted on Apr, 27 2016 @ 09:20 AM
link
Also, regarding my rant and the other politicians. I believe you can see the very same thing I pointed out in my original post. Don't look at the speaker, Don't listen to the words. Just look at the people behind them, basking in their false sense of righteousness with their "chosen one". The "good one" the "right one" the one that's better than the "other guy". The look on their face and the twinkle in their eye, It's the same for whatever candidate.

I don't pay as much attention to how they speak as much as what they say, unless they pull some kind of really blatant pandering trick by obviously pretending to be what they aren't.

Ha! I hadn't even considered that, but you're right.

I was just pulling an example of someone trying to pretend to be something they aren't.

There are those that say "Statism is a cult"...


It's the cult of humanism. The State is the god of their own manufacture.

Ha! I hadn't even considered that, but you're right.

I was just pulling an example of someone trying to pretend to be something they aren't.


She hasn't changed much, in either regard.

posted on Apr, 27 2016 @ 10:16 AM
link
I think they are all wearing us down to a point where we just give in and ask for what ever tyrant of the day they want to show us .Watching the US politics is so painful and so obvious ....give us the real deal and cut the chase ,we don't want to play their game .....they have no rules and there is nothing fair about it ...they win we loose ...wash rince repeat .round and round and where she stops none of us knows . go bernie :>)

You could have saved yourself some key strokes by just typing: "Cult Leaders" for your thread title. Or maybe make it: Cult Leaders, Cult Leaders and.......Cult Leaders

In other words, I totally agree with you.

I suppose, and as others pointed out this cult like mentality isn't restricted to the ones I've listed. I believe those three though are probably on the higher end of the scale.