Why Bernie Sanders is Actually Winning


On yet another Super Tuesday in the 2016 election season, it's our job to look at the facts about where the current candidates stand and their chances at winning the nomination.

Despite the current delegate count, the amount of support and enthusiasm for the Sanders campaign from his supporters in states like Illinois and Arizona clearly shows that Sanders is the most popular candidate and well on his way to the presidency.

To the laymen it may not seem that way right now, but political experts and statisticians on Reddit Politics have broken down why Sanders has the best shot at the nomination and the oval office. 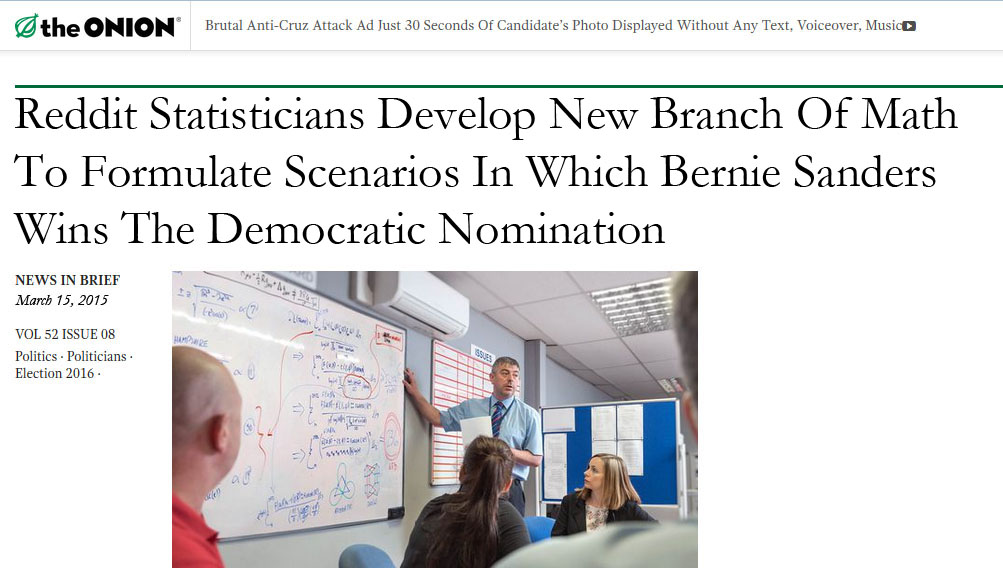 It must be that new 'Common Core' math they are teaching all the young liberals these days. We all know Hilary has this one in the bag.

Yep, Hillary will be in the White House come November.

It's foretold by the Bilderbergers.

posted on Apr, 26 2016 @ 05:15 PM
link
I'm not sure if this Op should be in the joke section or are you being sarcastic. Well you are a trumpadoor fan so ill go with sarcastic.

More trolling bernie fans cause there big guy is a joke, i haven't seen any new threads by you in a while, man it made ats so much better.

I see your starting to #FeelTheBern as well.

It must be nice for you when ATS feels like a safe space.

Umm. Won't it be crowded with the Obama's still living there?
She will move in in January.
edit on 4262016 by Sillyolme because: (no reason given)

the new joke about Bernie, is the guy who designed this:


of course Bernie didn't like it, and the designer felt sad! ahahahah

Bill just can't wait to get back into the Oral Office. Hillary will likely spend her first year in office moving between the White House and the Court House so he will have plenty of free time on his hands. 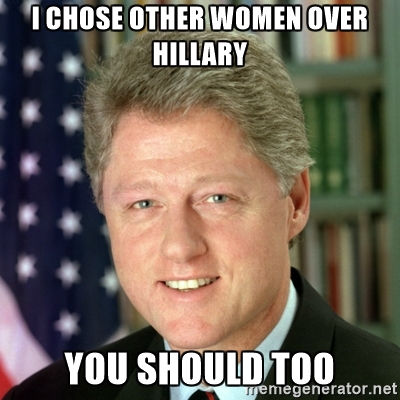 Did you post this garbage just so you could pick little fights, taking pot-shots at the Clintons?

Are you going to address the fact that you posted a thread in which it's content is based on a humor YT account and a satirical piece made by people who make things up?

Yes, its called comedy statistics.
edit on 26-4-2016 by HUMBLEONE because: (no reason given)

originally posted by: introvert
That Youtube account is CollegeHumor and the other piece is from The Onion.

It's satire meant for a couple laughs.

I hardly agree with you, but I did star this post. There is not any real election 'fraud' occurring this election...it is just becoming more visible how our election system has been established. Sanders and Trump can whine all they want, but neither are real D's or R's in any historical sense. Unfortunately, the two-party system had created this disaster of an election due to the growing arrogance and, yes, naïveté!

I have to admit, in previous elections, I and others I actually know (though I can assume others) actually decided to be more informed an vote in the primaries instead of being just lazy and putting in our single vote at the general election. What difference will it make? I think we all are just trying to determine if we really have a voice or not.

Will this change anything? Obviously, this is an unique election year. Obama seemed to have divided this nation more than he helped. Many will not want to make the same mistake. Unfortunately, so many perspectives on what change is needed or not, is going to make the popular decision difficult. Too be honest, while it will be a tough choice for me, I really hope the GOP nominee, Hillary, Trump, and Sanders will all run for general election!

I know it's a fantasy...sanders has been to soft on Hillary and would rather she keep it democratic...yet one can dream! The reason I dream? I want this bi-partisan to go away. Truly elect 'individuals' on their merit to serve and protect the rights of the citizens of the US.

Umm. Won't it be crowded with the Obama's still living there?
She will move in in January.


You know what Hillary is like, you can imagine it can't you?

Welcome to the Mud-Pit, if your feeling triggered right now you should probably stick to the elections forum.

That is the funniest meme I've seen in a while.

Star for you as well. You made some good points.

originally posted by: Konduit
a reply to: introvert

Welcome to the Mud-Pit, if your feeling triggered right now you should probably stick to the elections forum.

So you just wanted to pick a fight using lighthearted comedy?

Have fun. I'd rather have a few laughs than engage in douchery.

Judging from your first 2 comments, am I the one starting a fight here? I posted a lighthearted thread and simply respond to the comments, if you can't stop yourself from getting triggered then that's not my problem.

posted on Apr, 26 2016 @ 06:33 PM
link
The op as already stated in his past threads that he likes trolling so he can see is Op in the front page, don't change your style, you help reinforce people's dislike of anything on the right spectrum.

Enjoy your troll and insult thread.

In case you didn't notice, you were the first one to throw out an insult in this thread. #doublestandards

It's funny how some people consider those who disagree with them to be trolls.