The Looting Marathon: Outrage as dozens of thieves are filmed brazenly stealing bundles of water lef

"The mob were pictured descending on tables laid out with liquid just after the 26.2 mile event started.
Eyewitnesses say a group of opportunistic thieves started stealing the bottles minutes after the front runners had passed through.
One man even brought a trolley with him to pile up crates of the water which should have been much needed refreshment for the athletes."

I first saw the original video on Facebook about an hour ago - it had been shared over 12000 times.

I went to return to it 10 minutes ago and the video had been removed. Through searching I cant find any other copies of it.

A quick Google search only shows The Daily Fail (Daily Mail) running an article on the theft. All other MSM are ignoring it.

I have made a screen capture of the article - just in case the Daily Fail article is removed. 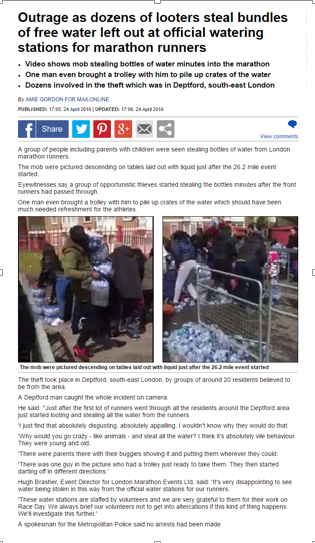 Essentially the video showed a large volume of people (mostly from ethnic minorities) stealing large quantities of water from the roadside of the London Marathon. We have running, drinkable water in all of our homes in the UK (providing you pay your utilities). There was no need for this kind of behaviour.

With the EU referendum coming up I am seeing more and more things like this being suppressed/removed/hidden.

posted on Apr, 24 2016 @ 12:11 PM
link
So a bunch of people nicked a load of water, probably seemed a good idea given how much water can go for in a shop but it'll not be much use as plod will visit the local shops asking for invoices for the water bottles that match and nick anyone who can't provide the paperwork.

posted on Apr, 24 2016 @ 12:11 PM
link
Stuff like this happens everyday.. And rarely gets covered.
More interested showing us death, destruction and economic problems these days.

NO it's just the type of story that makes other real news go "okay anybody die...no, next story".

Stealing water really isn't as big a news story as you might think.

A friend was once caught in a big police raid. He was the one with masses of fluorescent light tubes under his bed. It takes a special kind of mind to carry out these unexpected crimes.

I'm not overly bothered about theft of water. I'm not even too fussed about the ethnic make-up of the criminals...

...the main purpose of the post was to highlight that it seems like where this occurrence was covered a few hours ago is now nowhere to be seen.

As I mentioned within a few hours the original video had over 12000 shares across Facebook only for it to be blocked/suppressed. For a statistical point of reference the last post by Kim Kardashian (a much championed gutter of social media) was shared only 2000 times in the same space of time.

To say that this lack of coverage was due to lack of it being newsworthy or of interest to the public doesn't stand up to scrutiny in light of the manner and speed with which it was spread on social media.

The reason I very briefly mentioned the EU referendum is due to the information war that is currently raging across the UK. Censorship and information suppression/misinformation seems to be getting ever prevalent/the norm.

Strikes me as odd. Where are all the Marathon staff? How come we have full colour photo fits of the thieves !!!!!

How thick are those thieves stealing stuff whilst the race is showing on BBC TV live ?!?!?

There is something about this story that doesn't smell right.

posted on Apr, 24 2016 @ 01:39 PM
link
what do you want msm coverage without blood, death, bent cars/airplanes/boats/trains, huge amounts of money missing or large tits...come on theft is old school.
Never trust msn...just like you never trusted anyone over 30. Now that I am a multiple of that it seems like a strange thing to say.
Cheers

Where are all the Marathon staff?

There's a man wearing a Buxton shirt in the video between 4 and 5 seconds.

The Mirror article is loading so slowly quoting seems impossible, But it does mention the Buxton water marshals seeming overwhelmed by the mothers and children stealing the water.

Lo ndon Marathon have said they are aware of the footage and will be investigating the incident.

Hugh Brasher, Event Director for London Marathon Events Ltd, said: “It’s very disappointing to see water being stolen in this way from the official water stations for our runners.

Metro, Mirror, Daily Mail, Evening Standard, The Sun, The Independent, The Epoch Times. There are stories there. news.google.com... MQqgIIJzAA

originally posted by: woodwardjnr
a reply to: Loque76 suppressed by the msm, yet covered in the daily mail. I'm not sure what the connection with the eu referendum is?

Because the rabid right-wing in this country are pushing the EU exit as a nationalistic/xenophobic/racist campaign while pretending it's not about that to give it an air or respectability - while trying to stop far-right b**ch Marine Le Pen from coming to the UK this week to give a speech that will probably show all sane and sensible Brits exactly what the "Brexit" bunch are really all about.

This is all a right-wing crusade, they'll find anything they can to link the EU/Immigrants/refugees/crime/terrorism etc.
edit on 24-4-2016 by Rocker2013 because: (no reason given)

Add immigration and anti-European sentiment to the list and you have the Daily Fail right there in that description.
Check out their main page and prepare to be slapped with a bizarre mix of nationalistic ranting, celeb gossip and tit flashing.

posted on Apr, 24 2016 @ 04:19 PM
link
I beleive that this story involves subliminal messages and thoughts because of what is happening in europe.
I've also noticed it in other things like for example in comercials...
It is quite scary if not terrifying as to what they are trying to make us ready for.

posted on Apr, 24 2016 @ 04:33 PM
link
Besides the tit flashing....whats in Brexit for Britons?
Whats the City of Londan have to say about it?
If downtowns square mile is against it....I would imagine the peoples intrest lies in opting out...
I assume the Royals have kept mum about the whole thing?
Their money is tied into the City of London too id expect....
Would it put a cork in the One world gov scheme for Britain to opt out?
Or merely a twist?
Does the LB sterling suffer without the continents massive debts or gain with independence?
The questions I have don't have much to do with racism but the financials of this exit may be fraught with danger for the whole system, even be the Black Swan we so fear right now...

posted on Apr, 24 2016 @ 07:37 PM
link
It's Deptford, people can and will steal anything there. When I lived over there years ago somebody broke into my shed and ignored the bike, chainsaw, lawnmower and garden furniture in order to steal my broom and a jar of nails. I often wonder how much crack that bought and whether they were pleased with their takings.

posted on Apr, 24 2016 @ 07:40 PM
link
The MSM were/are afraid that with the news and knowledge that water is free and on tap for all, that because minorities were seen stealing it, that it would become news or common knowledge that minorities love to steal everything, even when they don't need to.
That is likely why it is being ignored in the media.,..

This is not what I believe personally, I just think that the MSM is afraid of this story because they don't want to be labeled racist for telling the facts.
edit on 24-4-2016 by NoCorruptionAllowed because: (no reason given)

posted on Apr, 25 2016 @ 04:12 AM
link
This is bs.. If you watched the video, you will see loads of empty bottles all along the road, that would indicate the runners have already been through.. Also the Buxton guy is totally unfazed by the 'theft'

My hypothesis is this.. The runners have been through, which means the water is surpless to requirements.. So to save more cost getting a truck/Van and extra staff to go around the water stations collecting it, they just give it away..
All you are seeing are people grabbing a freebie.. I think the story has been twisted.