This may be the guitar that ends the debate about "tone wood" once and for all.

I was led to believe that 'Stratocaster' was nothing more than a mixture of the existing 'teleCASTER' name with the futuristic 'STRATosphere' (higher/faster etc… eg stratofortress, stratocruiser etc), and that there was no copyright violations related to it.


I think the Steinbergers(sp?) had a graphite neck, didn't they?

Yeah, neck and body were one piece graphite composite. They were at one time very popular but fell out of favor; I think due to the fact that they didn't lend themselves to modification and they were cumbersome as hell to play sitting down.

All my current axe's are traditional wire and wood with Bill Lawrence pups.

Other than a possible invitation to join someone else's band for a song or two my days of performing in public are over, anyway. While I may have kept my day job there were too many years of being a "Sunday afternoon" father. My three most successful bands all consistently booked at least 1 1/2 years minimum in advance. Sunday jobs always required a band vote before the booking was accepted. I always tried to make Sunday drives an adventure for them and we never had a firm itinerary. Once the car's tank was full, the kids picked a direction and away we went.

With the time I have left I intend to concentrate on learning new things that got nixed by a mixture of the tastes of other band-mates and necessity. Since I don't have to think in terms of what is commercial or dance-able, there is a newfound sense of freedom (although I am also learning to work around the factory-related injury to my left thumb and index finger). I have everything I need right here at home for recording and a grandson who is a scholastically honored percussionist and top of his class at college in recording. His band (like so many) fell apart just as they were going through all of the legal stuff that precedes signing with a label. There are two companies that he has signed with as a sponsor (is that the right term?) of their drums & sticks. He also does studio work (and has a day job).

He's anxious for me to get my hand back in so that he can record some songs with Grandpa! Here's his last band:

originally posted by: intrptr
a reply to: smurfy


That's what I am saying, the more useless wire behind the bridge, the less I like the sound..but that's me, but I do say that particular item is equal to acoustic and electric, and again for me.
I don't doubt though that other elements like the body material can play a part, and for electric the pickups undoubtedly play a part. I must say I like the Strat though it was just a great sound from the start...ooh! anagram!


originally posted by: Astyanax
Tonewood is more relevant to acoustic guitars, I think.

You'll notice my "Dream" guitar that I built utilizes the same single coil/double coil choice I had on my stolen Carvin.

It's a bit ironic that my timing fell when it did... When I talked to the rep back in the late '70s about adding a whammy bar(tremelo tailpiece was the term accepted back then) he informed me that Carvin had pretty well decided that was a fad that had "run its course" and they'd dropped the option. Before long Van Halen and the '80s came along and I felt somewhat vindicated.

Now we've come full circle... My guitar is built and I've recently started seeing Carvin's Wilkinsons showing up on eBay because they are once again dropping the "fad" as an option.

Fact is that I can feel blessed every time I feel that weight across my shoulders because she truly is not only a one of a kind but even the whammy bar is unique in ways that nobody would notice, just looking. The "sloppiness" that got worse the higher you raised the Carvin licensed Wilkinson was because of the way their pivot posts were designed.

With a bit of research, I found that Warmouth's posts had an inner set-screw that, once you finally were where you wanted to be height-wise, turning the set-screw down 'til it bit good and solid into the body totally eliminated the annoying play I'd hated.

Shortly after that I found out from an old music acquaintance that Mighty Mite had their own licensed version of a Wilkinson that, unlike the Fender trem or anyone else's Wilkinson, had an arm that fit into the tailpiece and then had a screwdown collar so that you could let it either swing free or, with a twist, put it right where you wanted it for a song or two. That's much better than either swinging free or tightened down by an allen wrench (and accordingly requiring the wrench to loosen and let it swing free again).

So it's not readily apparent, but I've actually got a three-way hybrid floating whammy bar that may well be a one of a kind!

The other mini-switch is for in phase or out of phase.

I also LOVE those locking tuners! Changing strings has always been a real pain. Between having a locking tailpiece and tuners that let you lock in a string with just a bit of slack makes breaking in new strings nearly painless.

While it may not show up in that photo, I should mention the scalloped neck. An online friend from Europe made the suggestion and it was worth the work. I didn't just crush the joint on my index finger, the blade hit the bone when I took off the tip of my finger. For now it's still painfull and, after all those years of having a fretboard, a bit strange to get used to but sure doesn't hurt as much as pressing down a string on solid wood.

Thanks for the tip! They are now bookmarked in my music/hardware folder.

I'm pretty hooked on those 22 pole Carvins but there's no such thing as too many choices, especially when they come with recommendations.

originally posted by: smurfy
-- snip --
I must say I like the Strat though it was just a great sound from the start...ooh! anagram!

originally posted by: olaru12
I played these for years, both bass and 6stg. loved em...indestructible, stayed in tune and just fun for cutting up on stage with a wireless rig. But the composit did sound cold but when run thru a tube screamer, big Muff and a Blues Jr. they rocked.
-- snip --


I've managed to at least narrow it down to Bowie's "Tin Machine" period. Haven't located the performance I was thinking of but I couldn't help but notice even Bowie played a Steinberger for some songs on that tour. Another very entertaining period for Bowie & crew.

I must say I like the Strat though it was just a great sound from the start...ooh! anagram!


Same here. I learned on a white fender strat in the early 70's. Then a gibson hollow body and finally, a fender bass. Shout out to the fender amp and marshall speakers.

There are acrylic guitars that sound great, but due to the weight or whatever may not be suitable for all people.

I mean, let us look at it from a logical perspective. The "sound" from an electrical guitar is the vibration of metal strings over a form of magnet. That signal is then sent out via TRS jack to an amplifier. Distortion may or may not be added.

The electronics of the guitar determine how it sounds. The signal path plays into it, along with the design of the magnetic pickups.

You could probably make an electric guitar out of any non-magnetic material and have it sound similar, if not identical to another guitar that uses the same hardware in a different body. Well, assuming string length is similar. 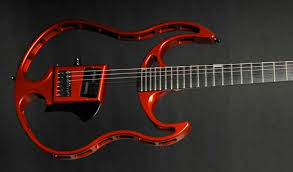 Apparently there are SOME similarities between the two.

Fun fact: an electric guitar would still make be able to work in a vacuum because it uses electromagnetic fields to produce it's sound signal. Now, your amp wouldn't be able to make sound waves....but you might be able to wireless transmit the signal to a space station or craft as you jammed outside.

SO, if a guy in a spacesuit in orbit could still get a signal and had a long enough cord or wireless transmitter -- he could make music in the vacuum of space.

Hence, "tone woods" are not needed for the sound of a guitar. There are no microphones on an electric guitar. The pickups only "pick up" the electromagnetic osculations -- which are turned into sound via an amp.

True. You could arrange strings on a screen door and if the right pickups were installed, it would sound good.