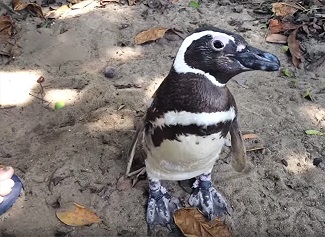 The story has always boggled my mind. What on earth was going through the seal's mind to have taken the time to keep him alive? Was it the seal equivalent of "Get off my lawn?"

How nice of you to take a positive thread, something we have so little of lately, and crap all over it. But hey live in your negative depressing world and we who appreciate the compassion and beauty in life will carry on without the sh***y attitude.

Have a great week. You apparently need one.

posted on Apr, 25 2016 @ 01:18 AM
link
I don't remember if it was a book I read or a video I saw..but I once saw/heard of a large cat..maybe a leopard, that was stuck on one side of the river with its cub stuck on the other. A local guy with a small boat approached the mother cat and she just jumped right onto the boat, somehow instinctively knowing the guy was there to help. And after he brought the boat closer to the cub she was able to rescue him thanks to the guys help.

It was quite a moving tale.. Too bad I can't remember where it came from..

posted on Apr, 25 2016 @ 04:58 AM
link
I love the ones too that we all have seen in the news when wild animals help each other especially when its in that "this doesn't count" scope of things where a predator will help save what would otherwise be prey especially when its a baby or a youngin who is in trouble its incredible to see see of the mist vicious animals turn into heroes.
edit on 4/25/2016 by AlexandrosTheGreat because:

A vid of a koala after a bushfire in 2009 getting a drink from a firey..


I think we definitely owe it to these animals anyway.

To all people that share this same response which is a good response.
Unless people are vegetarian then it is quite hypocritical .

posted on Apr, 27 2016 @ 08:58 PM
link
a reply to: Kandinsky A couple of years ago when I would sit outback and read a wild rabbit would graze very close to my chair sometimes zipping back and forth in front of me as if trying to fake me out. In the fall i didn't see him anymore and during a cold snowy portion of the winter i heard a bang at my front door, i opened the door stuck my head out and saw the rabbit hopping around the corner. I warmed up some carrots placing them in a small dish outside and a short time later they were mostly gone.i could see rabbit tracks leading away from the dish. I thought myself what just happened?


I think we definitely owe it to these animals anyway.

To all people that share this same response which is a good response.
Unless people are vegetarian then it is quite hypocritical .


Meh, I've been vegetarian since trying to impress a girl in eighth grade which wore off in a couple weeks but in that time I felt different enough and read enough about it that it has stuck 18 or so years. However its not as much the eating animals that I am vegetarian because of (although I personally would do away with killing animals and hunting/fishing altogether if I had the choice) but its the sad full of pain tortuous lives animals in almost all nations are made to endure in 2016 nonetheless that I can't for the life of me explain people letting go on without a peep. Shoot one famous lion and get death threats. But cut off body parts at birth, tie down, or keep baby cows in plastic pens since they'll desperately lick any metal by instinct to get the iron needed for the strength to stand up (which loses weight uh oh and nobody gives a darn. Even worse is that turning their lives around even if theyre still kept for meat doesn't take a fortune and isn't beyond our reach, its a matter of trading away every last possible moment theyre not living in agony all to squeeze out the maximum cents that's so evil, I for one am totally supporting the plan to make all meat by 2030 kill free. Already we have the means to clone flesh which is being eaten, not cloning that effects us, which thus alleviates the need to pump animals full of steroids, no longer loads us up with the antibiotics theyre overly prescribed, hormone therapy which has done a number on humans is no longer needed, just grown pure flesh any cut any size from a cell and a pitre dish. You can't tell me you'd be more afraid of cloned meat than you are of the diseased, drug filled, hormone, antibiotic overload you and your kids eat now every day right?


You can't tell me you'd be more afraid of cloned meat than you are of the diseased, drug filled, hormone, antibiotic overload you and your kids eat now every day right?

Thanks for your response. i totally agree regarding the conditions they are kept, in before even killing them. Its just disguising. If people go hunting and eat the food they kill i have no problem. That's us being on top of the food chain. But hunting for fun and keeping animals in really bad captive situation to make paper with pictures on them. Its just stupid.

reading comments about cloned meat and normal meat. - why have either? there is so many delicious food out there that is not meat. Even meat substitute like Quorn is getting really good now and tasty, as before was a little bland.

until we run out of other food sources i think meat in general is human greedy. - cloned meat to a degree is humans playing od as always. Unless its grown naturally whats the point. We will mots likley have different medical problems later in life. We are Guinea pigs to a lot of new stuff and wonder what the long term effects are.

i love raw food also, i like going to a raw food restaurant, really tasty food.

i have no problem with meat eaters, its their choice, but i have a problem with people that say they love animals and then eat them.

The only thing one can take away from that sort of happening is that the world is a much stranger and wonderous place then we can, usually, imagine.

It's interesting that Canadian Geese understand when they will be harmed and when they won't, during hunting season they fly very high over firing lines staying away from hunters. Often ascending and descending just out of range of the shooters.
edit on 11-5-2016 by Blue_Jay33 because: (no reason given)