I been toying with an older idea and what it would take to make it work, I think I may have come up with something.

Recently I seen the Blue Angels at an Air show and got to wondering if they can do that in planes why are there not crews that can do that stuff in Helicopters, I am thinking the Big Helos like the Sikorsky S-64A/CH-54

If they can get good at formation flying then six of them in a hex pattern could transport a 150 to 200 ton chunck of Arctic ice to the Lakes that are drying out...

The idea is Yes it will part way melt in route to the target lake bed, that incidental spillage would be great for helping irrigate those areas in between...

Dump the Surviving pieces of Ice off in the lakes and lake beds, even if it is multiple trips.

Yes this may cause havoc with the Ecosystem, massive introduction of cold and wet to some areas But it also would help spread what cooling there is around some. Heck according to the "experts" the caps are melting anyways so lets put them to good use.

The Big problem area is Death Valley. It is too big to cross and fill with ice at this time...

There is a solution to that.

Death Valley is below sea level,

Why not make a pipe from California coast to death valley, sort of like the Two cup trick and straw, taking water from a higher point to fill a lower point.

This would create a new Sea in the middle of the USA, so what if it is a Salt Sea, we already had great salt lakes dry up on us, this would be akin to refilling them.

Mind it would do about four things I could see,

Lower the risk of California flooding, we may also pull this off with the Atlantic, just have to find a place for it.

The desert at first would soak the water into the water table filtering the salt out and refilling the aqua-firs.

Third it would make some land owners happy about finally having ocean front property in Arizona.

Would cool the Desert off thus allowing Ice Haulers to drop fresh in to further south lake beds.

Of course if this works then also the idea of pumping Centrilla full of sea water might help to put out the silent Hill effect going on there.

God late Nights when I can not sleep suck, my mind just goes there.

posted on Apr, 23 2016 @ 01:09 AM
link
Or just run solar powered distillation/desalination or whatever along with giant hemp plastic pipelines and just use special coatings to protect pipes and perhaps is solar powered for extra utility.

Cheap aside from labor and machines and the USA is in need of more hemp as well as being expert in laying all size and type of pipes.

hmm 20 tons is the quick fast limit for solo flights of the brand I mentioned, what about conga line style 20 tons a single copter and what do you get...

kind of filling really big cups with sonic drive in ice.
edit on 23-4-2016 by CoBaZ because: sonic drive in plug... yes you want that cherry lime now....

They'd have to be so close that the rotor wash would decrease the maximum they could lift, and make formation flying harder. Even at that size the block of ice isn't big enough that they would be able to spread out enough to reduce the problems they'd have trying to lift it.

If they were going to do something like this, they'd be better off breaking it into smaller, manageable pieces and lifting them one by one with a solo helicopter.
edit on 4/23/2016 by Zaphod58 because: (no reason given)

posted on Apr, 23 2016 @ 01:19 AM
link
I gotta say I like the way you are thinking anyways and we do need to find ways to farm more fish on land. Where better than where you could have almost unlimited sunlight for power and space for feeding the population.

The oceans are a bit nappy these days but thats my opinion though I would be happier to eat some cleaner fish as would most of humanity.

posted on Apr, 23 2016 @ 01:20 AM
link
What I am toying around with here is trying to find solutions for problems, after all we learned the hard way with a big enough controlled explosion we could put a brick into space. So how far would we have to space sky cranes to have a near constant dumping of ice in dry lake beds to refill them?

See my edit above.

posted on Apr, 23 2016 @ 01:53 AM
link
It sounds like a plausible idea Op It may be costly however as well as straining on the environment.
Perhaps it would be wiser to invest in tapping into sub surface rivers-lakes-ponds and irrigating the water back above land.

Or even consider investing in ringwoodite 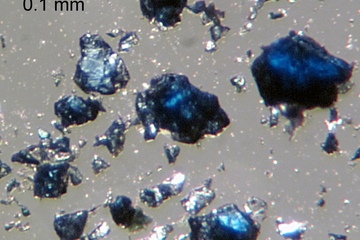 emulsion like processes and extract the potential mineral, then some how on land process the water out of the mineral...

It may also be costly but the process may limit immediate changes in climate and may give scientists time to better understand mass liquid movements & redeposit and how they affect environmental changes...

Deep within the Earth's rocky mantle lies oceans' worth of water locked up in a type of mineral called ringwoodite, new research shows.

The results of the study will help scientists understand Earth's water cycle, and how plate tectonics moves water between the surface of the planet and interior reservoirs, researchers say.

The Earth's mantle is the hot, rocky layer between the planet's core and crust. Scientists have long suspected that the mantle's so-called transition zone, which sits between the upper and lower mantle layers 255 to 410 miles (410 to 660 kilometers) below Earth's surface, could contain water trapped in rare minerals. However, direct evidence for this water has been lacking, until now.

Giant balloons that can carry loads over long distances could one day even transport entire buildings.

Australian firm Skylifter is developing a piloted airship that will carry up to 150 tonnes more than 1,200 miles.

They hope that the vehicles could one day carry rural hospitals and disaster-relief centres to remote areas.

posted on Apr, 23 2016 @ 02:21 AM
link
I'm not a geology or similar expert by any stretch of the imagination,but I don't think that just putting water back into a lake bed that's been dried up for thousands of years would work.Lakes that currently hold water do so because the ground underneath them is already fully saturated with water,meaning what's on the surface has nowhere to go.If you fill Badwater Basin with a big enough sheet of ice to cover it,it'll melt and just soak in as there's no existing ground water or water table below the surface.After a couple of days it'll look the same as it does now.Even piped in water would have negligible effect for a long time I would imagine.

I drove through Death valley last year and only saw one place where there's water naturally on the surface,Panamint Springs.Don't forget that the valley is dry not just because there's little or no water there,but because of how the land lies there and the weather working to keep it hot and dry.

posted on Apr, 23 2016 @ 08:12 AM
link
Right id like to start by saying this info is years old, from a geography lesson at school, I wasn't very good at the whole school thing so the info is probably lacking details as I was probably slumped over my desk half asleep but here goes lol I have tried to google but am clueless to locations, dates of construction etc so cant find anything

A canal needed to be built through a fast draining draught type area leading to another river/lake, it would be simple with concrete or whatever but a requirement was it had to be natural looking
If I remember right they dug a fairly wide V shape trench. On the walls of the trench they sprayed a thick slurry of all kinds of manures and peat, all sorts of organics. In the slurry was a mixture of different plant seeds water based and land based seeds.
The walls would be sprayed with water if it started to dry until the seeds had started to take root. The microbial life from the manures mixed with good deep rooting seeds was meant to increase the water holding capacity of the surrounding natural land. Water would still seep through but would carry microbes and organic life with it also increasing the holding capacity as it passes through the previously dead ground
They showed an after shot from about a year later and it looked like a real natural river with the surrounding ground covered in grass and flowers
If anyone has a clue what or where I'm on about please tell me


Going with the pipeline idea they could implement the same idea, dig a series of trenches parallel with each other. fill each trench from the pipeline and it will soon start to flourish and hold water after a year or so, once the trenches are holding and have spread the microbes and organics, simply dig out the mounds between the trenches and you have a massive lake. The pipeline would probably need to come from a fresh water source rather then the sea as the high salts would kill everything we're trying to save