The War on Cash has many fronts.

The latest battle is for the face of the currency itself, and the central bankers, who control the front anyway, have imposed a symbolic defeat against the leaders in America’s past who have fought against the stranglehold of the money makers.

treasury Secretary Jack Lew on Wednesday will announce a decision to keep Alexander Hamilton on the front of the $10 bill and put leaders of the movement to give women the right to vote on the back of the bill.

Lew's decision comes after he announced last summer that he was considering replacing Hamilton on the $10 bill with a woman. The announcement drew swift rebukes from fans of Hamilton, who helped create the Treasury Department and the modern American financi

So are the central bankers getting what they wanted? Andrew Jackson's name being suppressed in "history"? Historyis written by the winners, and we all know the banking cartel are 'winning' in the form of 12-13 digit bank accounts. The image of Andrew Jackson won't be widely circulated because people might look into what he did. People might see that Jackson tried to get rid of the (then, as it is now) corrupt central bank of the US.

This $20 change-movement wasn't about who is being put on the bill, but who is being removed from it. The financing for this movement likely came from bankers.

This true motive was evident when Secretary of the Treasury Jack Lew said he would instead remove Alexander Hamilton from the $10. This throws the backers of the movement into a fit when they should have been celebrating their victory. Thus, the true motive was exposed and removing pro-central banker Hamilton from the $10 was considered a bad thing. Now Jack Lew has relented and given the bankers what they wished. The sheep will focus on who (Harriet Tubman) is put on the new $20 instead of who was removed from the old one. And again the sheep have had the wool pulled over their eyes.

P.S. I love one of the comments:

"How about Richard Simmons on the $3 bill? )


With that, I bid you goodnight.

He has been in it for 80+ years, hardly a suppression of history.

posted on Apr, 20 2016 @ 10:32 PM
link
Jackson was a very interesting character in American history. But I do not see him as worthy of commemoration on our currency. It was a political move that put him there to begin with.

Susan B Anthony?
Sacajawea?
Fairly recent history.....apart from the those rare Silver certificates. 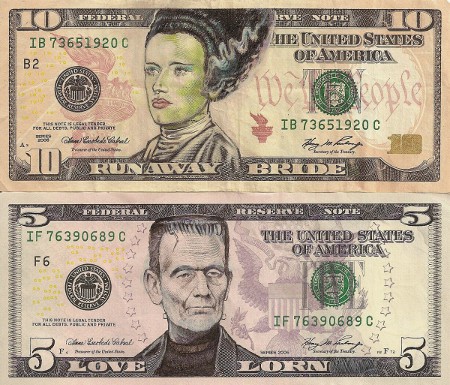 posted on Apr, 21 2016 @ 12:14 AM
link
Does anyone under 25-30 years old even know who Andrew Jackson was or what he did anymore? I don't think images on money is the route being taken for the suppression of history.

They have made all kinds of 'collectable' dollar coins. Those are nothing more then scams imo and would hate to see more of our historical figures likenesses used for it.

posted on Apr, 21 2016 @ 01:15 AM
link
Just think of all the cash machines that will have to be replaced if they can't be updated. All the copy machines that need new firmware. Not to mention all the uneducated / uniformed people who will refuse as counterfeit.

My two cents as a lineal member of a federally recognized tribe is good riddance. He was the most aggressive anti-native president in American history.

How many people are getting their history off of banknotes, anyway? For that matter why put people on the currency at all?

posted on Apr, 21 2016 @ 07:09 AM
link
I'm pretty sure that Jackson was originally put on the $20 bill as a way to slap him in the face for tearing apart our second central bank. It's funny how you are trying to spin a narrative like this is a banker's plot to suppress him when his face being on the money has been a slap in the face to everything he stood for in the first place.

So many people whining about Jackson's face being removed clearly don't even know what he did while he was in office. They just know him as a great President I guess...

You do realize that the Treasury Dept and Federal Reserve are completely separate entities? Jack Lew is a bright guy - who could easily leave the administration for a 'bankster' salary (happens all the time) - and seems earnestly driven by civic duty; it stands to reason that this is a simple commeration of a historically significant American figure.

Fair enough, except that I didn't really 'spin the narrative', only shared and expanded upon the ZeroHedge story proposing this speculative idea, as I quoted in the OP


The latest battle is for the face of the currency itself, and the central bankers, who control the front anyway, have imposed a symbolic defeat against the leaders in America’s past who have fought against the stranglehold of the money makers.

You make some great points though. Now that you mention it, Jackson being ON the $20 was a true slap in the face but this thread was in response to the article and the ideas originally presented there. Thanks for commenting KS
edit on 21-4-2016 by FamCore because: (no reason given)

posted on Apr, 21 2016 @ 09:12 AM
link
I find it interesting that the Second Bank of the US was privately owned. It was not owned by the United States. And the reason Jackson took all the money out of it is because he believed it was only good for the elites. Just like the Federal Reserve is today.

"Anti-Bank Jacksonian Democrats were mobilized in opposition to the national bank’s re-authorization on the grounds that the institution conferred economic privileges on financial elites," Wiki

Wiki- A private corporation with public duties, the bank handled all fiscal transactions for the U.S. Government, and was accountable to Congress and the U.S. Treasury. Twenty percent of its capital was owned by the federal government, the bank's single largest stockholder.[7][8] Four thousand private investors held 80% of the bank's capital, including one thousand Europeans. The bulk of the stocks were held by a few hundred wealthy Americans.[9] In its time, the institution was the largest monied corporation in the world.[10]

Jackson had no children. He adopted his Wifes nephew. His siblings died before they had children. I descend through his cousin Thomas Jackson.


So many people whining about Jackson's face being removed clearly don't even know what he did while he was in office. They just know him as a great President I guess...

Compared to the turds they try to float down the river nowadays, he's freaking brilliant.

But "great" is not a title I would bestow upon him, unless its modifying the word "asshole".

Noteworthy, and entertaining to read about? Sure. But certainly not the kind of character I would have found endearing.

posted on Apr, 21 2016 @ 09:38 AM
link
With all the real issues facing us today, worrying about which dead American gets their face put on a banknote seems like a bit of a silly thing to care about.

Almost like people are being distracted by a non-issue to keep them occupied with something meaningless.

Now do something useful with the currency and get rid of the penny...

angry females sparked this action women in 20's public outcry on social networks not that Planted Story of a girl childs' letter to the POTUS...

Harriet Tubman was an African-American abolitionist, humanitarian, and a Union spy during the American Civil War. Born into slavery, Tubman escaped and subsequently made some thirteen missions to rescue approximately seventy enslaved families and friends, using the network of antislavery activists and safe houses known as the Underground Railroad.
She later helped abolitionist John Brown recruit men for his raid on Harpers Ferry..."

iow, she was a reactionary/revolutionary... not much removed from Radicals of Today or of Radicals/Terrorists that brought up Obama ( re: Ayers of Weather-underground note)


so being a Spy, then supporting anti-establishment terror cells (John Brown's army vs. federal government) are the laudable traits of a resident ( but not necessarily a citizen) of the USA


ATS members.... this is the federal reserve note bill not a USA Treasury bill... the federal reserve was just upholding Tradition for all those years...
the FRN is soon to be Toilet-Paper grade currency... when the expected inflation begins full force the $20 might get you a liter of gasoline... a 20 will be worth chump change a dollar of todays money