posted on Apr, 20 2016 @ 12:37 PM
link
Ted Owens could predict the future. He claimed he actually caused many of the events he predicted through psychokinesis or telepathic communication with the Space Intelligences. He wrote a book called "How to Contact Space People" which was about his predictions, UFOs, and how to make contact with the Space or Saucer Intelligences. Jeffrey Mishlove wrote a book about him called "The PK Man, A True Story of Mind Over Matter" in which he documents some of Ted's predictions and explores the paranormal topics of Ted Owens' life.

Ted Owens predicted UFO sightings, hurricanes, and lightning strikes, among other things. Jeffrey MIshlove says that out of the hundreds of predictions Ted Owens made, he was wrong about a third of the time. He took credit for ending a drought in the UK and also a drought in California, among his other feats. It would be interesting to see if anyone could contact the space people, like the instructions in his book. Here's a link to a monologue Jeffrey Mishlove did about Ted Owens www.williamjames.com...
edit on 20-4-2016 by Whaler because: added link

originally posted by: TerryMcGuire
a reply to: Whaler

It would be more difficult to dismiss him if you were aware of some of his correct predictions. For instance, he predicted a major UFO sighting on December 1976 in the San Francisco Bay Area.
edit on 20-4-2016 by Whaler because: edited date


originally posted by: TerryMcGuire
a reply to: Whaler

It would be more difficult to dismiss him if you were aware of some of his correct predictions. For instance, he predicted a major UFO sighting on December 1976 in the San Francisco Bay Area.

And your evidence for this is one guy talking who has no citations. The UFO sighting you mention was NOT "major" in any sense of the term. And just where is this front page picture? You don't say; your single source doesn't say. You need to do a much better job of documenting your issue here. So yes, given the wide variety of unsubstantiated claims made by this one guy, it is very easy to dismiss him. One guy talking on a radio show proves exactly nothing.

For instance, he predicted a major UFO sighting on December 1976 in the San Francisco Bay Area.

Funny, I lived in SF in 76 and having been an avid UFO enthusiast from before that time I have no recollection of any major UFO sighting in SF at that time. But even so, his claim to have ENDED a drought in the UK and ENDED one in California seems rather self serving. These would be miracles in my book. That he claims to perform miracles puts him in the charlatan category for me.

It was at Sonoma State University, again here is a link. It was on the front page of the Berkeley Gazette www.williamjames.com...

originally posted by: Whaler
www.williamjames.com... here is the UFO sighting that was predicted by Ted Owens.

This is your proof?

C'mon, this is ATS, you will have to do better than this.

"Jeffrey Mishlove: When I got back to San Francisco, I pursued the question with Owens, of his demonstration, and he set it up with me in November of 1976 as follows: he said, "I will cause a UFO to appear. It will happen within 90 days, it will happen within a 100-mile radius of San Francisco." In fact, he said, "I'll cause multiple UFO appearances, and one in particular will be seen by very reliable witnesses. The photograph will be published on the front page of the local newspaper, and that's how you'll know, it'll be my signature."

And other things happened as well. He said, "There will be power blackouts," (that's also one of his signatures).

In December. 1976, it occured pretty much on schedule, December 12th as I recall, in Sonoma State College, a small college campus about 50 miles north of San Francisco. The Art Department, on a clear December day, was sponsoring a live demonstration of an unusual art form -- aerial artwork. A pilot who is an artist was flying his aircraft over the campus, he had smoke trailing out the back of his plane, and he was creating loop-de-loops and other designs in the air.

And this was the demonstration hundreds of students were outside looking up at the sky. Some of them had video-cameras. (This was in the days before camcorders but they were recording it, and there were photographs being taken). Many faculty members were out there.

The pilot of this airplane was named Steve Poleskie, and he was a visiting Professor of Art from Syracuse [Cornell] University. He was visiting Berkeley, and he was performing.

I actually have the videotape of this event.

As he was doing his loop-de-loops about 3,000 feet above the Sonoma State College campus, a UFO appeared right in his airspace. He witnessed it from the air. He said it was about 15-20 feet wide, and it just came out of nowhere. It was right there in his airspace, and it stayed there a few minutes and suddenly disappeared.

It was seen from the ground, and it was photographed. The photograph was published on the front page of one of our local papers, The Berkeley Gazette. And the videotape was actually shown on the Channel 9 Evening News, KQED-TV in the San Francisco Bay Area.

Ted Owens had scored pretty much a direct hit. "

posted on Apr, 20 2016 @ 02:15 PM
link
You are just repeating your single source. You provided the link so that we can go read it ourselves. Repeating the exact same thing here proves nothing. Ted Owns was a typical sixties-era-type contactee who said the Space Brothers did psychic surgery on his brain. It's naive stuff much like George Adamski and Truman Bethurum. Not worth pursuing.

That's not much of a prediction, certainly not very specific as to locale, and a three month window.

Odds are good, in any large metro area, even back in the seventies, that you'll be almost guaranteed to see something.

100 mile radius... That's one hell of a large bubble, one that goes straight up into orbit, too. Can't remember my high school algebra, but how many miles does that encompass? Quite a few.

As for the photo? If I didn't know what it was, I certainly couldn't identify anything from it. Barely tell it's an airplane, much less see the UFO at ten o'clock.

Of course, UFO is an unidentified flying object...so in that sense, if you don't know what it is?? UFO. But if, as I think this guy is implying, you think it's aliens from where ever, you're going to need to bring a bit more to the table to convince me.

(That includes all the way from Leicester to Norwich, Ipswich to Bath, Southampton, Bournemouth, Most of the English Channel, oh and Calais (in France!) 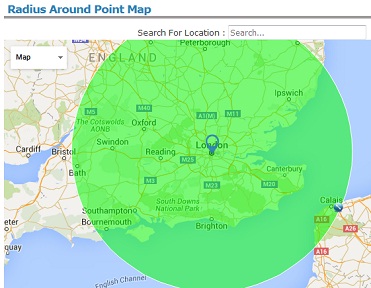 Darn I live in Devon. I won't be able to see it.

Whaler.. the Gazette is a small small paper. If this were a MAJOR sighting as you say, it would have been all over the news at that time. SF had two major newspapers, Oakland across the bay had at least one and add to those the big papers of San Jose and even Sacramento, not to mention all of the other local newspapers. Where are the articles about this in all of those publications? Not to mention all of the TV and radio stations through out the area.
I googled this sighting and found nothing but that one mention from the Gazette.

But back to my point earlier. He says he ended two droughts, one in UK and one in California. These would be miracles Whaler. Miracles. Are you claiming this fellow is making miracles? The proof of the UFO was very weak. I would need even more to prove a miracle.

posted on Apr, 21 2016 @ 11:18 AM
link
Ted Owens had some amazing predictions. For example, he predicted Nixon not finishing his presidency by either resigning or being forced out of office in 1970 (years before Watergate). He predicted an assassination plot by airplane on President Lyndon Johnson as well, almost a full year before confirmation:

"Owens wrote to President Johnson on May 10, 1966, claiming that a man was planning to crash a plane loaded with explosives into either the White House or into Johnson's ranch in Texas. He also warned that the would-be assassin was either an ex-Army flier or serviceman. This prediction didn't come to pass until May 4, 1967—almost exactly one year later—when, as the New York Times reported, “A former Air Force pilot has been jailed pending sentence because of an alleged threat to plunge a plane into the White House.”"

From: The PK Man, A True Story of Mind Over Matter by Jeffrey Mishlove

posted on Apr, 21 2016 @ 01:52 PM
link
Here is an article about Ted Owens from a different source, Otto Binder intelligences.wordpress.com...

Besides telepathically communicating with the Space Intelligences Ted Owens also wrote of another method to change the weather:

"In my rain-making, and causing lighting to strike, a certain technique is used. I extend my fingers at the skies, and visualize in my mind's eye lightning reaching from my fingers up into the sky. On the sky itself I superimpose, in my mind's eye, the words, "Rain, storm, thunder, lightning". I sense that the lightning from my fingers will cause storm conditions, and crystallize them for the finished product. In my mind's eye I see silent, motionless trees being bent almost double by powerful wind, and I again see, superimposed over the sunny landscape, black sheets of rain beating down.

After doing this for 10 to 20 minutes, I cease. That's it. I know that within hours, or a few days, the storm will come. That's the way I made the powerful Phoenix storms."

From: How to Contact Space People by Ted Owens