Some information on "Ark: Survival Evolved," and maybe a couple amusing anecdotes.

posted on Apr, 19 2016 @ 01:19 PM
link
So a little while ago I bought my first Survival game, Ark. I've been going back and forth on whether to get the game since it had kinda a "meh" score on steam, but It was on sale and it was my buddies birthday so I bought us both a copy. We logged in and created Characters. I created a fairly normal cave-man-esque guy of normal stature, my friend created a monstrosity that looked like the lovechild of Brock Lesner and the Hulk.

We spawned naked and afraid on the beach, at night, hundreds of yards away from each other. Of course, we didn't have any sort of reference point or landmarks to locate each other by, so we just ran like idiots up and down the beach looking for each other. The beaches are relatively safe, most of the dangerous animals are inland and further north, but at level 1 even crappy dilophosaurs can and will eat you frequently. We eventually found each other and started the process of harvesting things to start building our base. It has a typical tiered system of unlocks (called "engrams") that unlock your ability to craft weapons and items. So we started harvesting Thatch, fiber, and wood to make our "thatch hut" to protect us from aggroing dinosaurs. Little did we know that the dinosaurs would be the least of our problems.

This game has a number of different play types. There's Player Vs Player, Player Vs Environment, a mode that resets the whole server every month, and some others i haven't tried yet. We were playing on a player vs player server, which meant that everything can kill you. Like idiots, we built our thatch house on a cliff with a great view of the beach and easy access to the water. Little did we know that we had set up house in, essentially, "The hood." Because the "south" has less dangerous dinosaurs the newbies tend to congregate there, and newbies are mostly assholes. You get a lot of low level people just trying to obliterate your house and steal your stuff. One time I woke up in somebody's cage, fortunately I was starving and almost dead when I logged in, so my guy died and I respawned. Another time I logged in and a higher level tribe had killed me, obliterated everything we'd made, and then had the balls to build their base right above where ours used to be.

At this point, we decided to take our chances with the dinosaurs up north. We spawned up north, found a likely section of beach bordered by thick forests, then struck out into the forest. I found a nice secluded spot surrounded by tall trees and rocks to start building our small wooden house. This actually worked. We haven't been griefed since we found our new spot at all. Now, dealing with the dinosaurs has been a bit concerning.

One night (in game night) I logged into the game and awoke in my little 10x10 hut, and immediately heard something stomping around outside. Night time is ****ing dark in this game, and without a torch (or cheating with gamma) you can't see crap in the middle of the night. So I started blindly walking around trying to find my fire to get some light and whatever was outside must have heard me and started attacking my house. As it's attacking, I see a label pop up that says "Carnotaurus- Level 90." Well great. So I end up spending a terror-filled night huddling in the dark as a carno continuously ripped up the walls of my hut trying to get at me. He'd stop, then walk away, and i'd think "maybe he's gone" only for him to come thundering back at full speed and charge my walls. Finally he went away... either distracted, or bored, and I had found my motivation to rapidly improve my base.

Now to talk about the nitty gritty of this game, the dinosaurs. There is an amazing number of dinosaurs that can be ridden and a number of them that can be tamed but not ridden. Each dinosaur has its own strengths that fill a specific role. Anklysaurs use their tails to smash rocks to get stone, iron, and flint from them, T-rex's are kings of gathering meat and dealing damage, raptors are extremely fast but deal less damage, so a pack of raptors is usually the best idea if you're attacking something. You can even tame plesiasaurs and megalodons if you want to build a base in the water. Even if you're a low level you can make things easier on yourself by taming a pack of dilophosaurs or Compys to act as your bodyguards while gathering supplies.

I don't know if I just watched too much "Jurassic park" or "Land of the Lost" but this game almost feels nostalgic when I play it. It's gotten some low scores, mostly resulting from personal dynamics in the game. Some servers are utterly dominated by one or two tribes and jealously defend areas they deem "Theirs." Some of them will premptively destroy up-and-coming tribes before they can get too many dinosaurs. Many people find it frustrating to have all your work obliterated by a greifer while you're logged off (your character's body just goes limp and unconscious when you log off) but I find playing the game to be pretty satisfying, especially with a friend. In closing, Ark is definitely worth buying if you're into survival games or dinosaurs in general, but be ready to have a bit of a learning curve, be discreet, and get you some dinosaurs.

posted on Apr, 19 2016 @ 01:28 PM
link
I gave up on public servers months ago. Just no way to get ahead, so now me and some mates just run a non-dedicated server at home. Much better if you just want to build and explore. And if you haven't yet, try some of the mods...there's some really good ones.

Apparently that was settled for 40 mil, so at least it's not getting shut down soon.

originally posted by: Slanter
At this point, we decided to take our chances with the dinosaurs up north. We spawned up north, found a likely section of beach bordered by thick forests, then struck out into the forest. I found a nice secluded spot surrounded by tall trees and rocks to start building our small wooden house. This actually worked. We haven't been griefed since we found our new spot at all. Now, dealing with the dinosaurs has been a bit concerning.

I was up north with my tribe, we built our tribe base right at the falls bordering the artic area. pretty area, loved it there. They updated the game and introduced a new dinosaur, the gigantosaurus.
about 2 days later, one made its way to our campsite. we were all level 60+ with tons of dinos, t-rex's, hoards of dilos, etc.
It murdered all of us, all of the dinos, ate the entire campsite. and promptly evicted us from the north. we barely scratched it with the combined efforts of our tribe and all the dinos.

We were under attack for days beforehand though with a alpha t-rex attack earlier that week, my meatshield bronto died and that was the last straw

Only a Stark can hold the north.

posted on Apr, 19 2016 @ 04:20 PM
link
I think they nerfed the giga a little bit, it only does 10% damage to stone structures, but I do still live in constant fear of the giga and alphas... my base is in the northeast opposite Carno Island (dead island) and since gigas mainly spawn on the mountains they usually don't come my way. Had to deal with a couple alpha raptors and a few high level rexes and spinos, but thats about it.

A few days ago there was a alpha rex that somehow got in a poor tribe base, don't think anyone was online. I'm shouting on global chat "ALPHA REX IS DESTROYING *tribe*'s WALLS!" "ALPHA REX IS IN *tribe*'s BASE" "ALPHA REX HAS KILLED BOTH *Tribe*'s GIGAS" "RIP ALL *tribe*'s DINOSAURS!"

posted on Apr, 19 2016 @ 04:23 PM
link
The game world is quite beautiful, allot to explore and have many adventures, jungles, swamps, mountains, ocean, caves and its all full with different dinos top of it the game is actually updated all the time.

I played quite bit of it but mostly in unofficial servers, since we learned quick how official servers have allot of problems within, there was cheaters, griefers, trolls and so on, couple ppl or solo would have been pointless to continue on official servers, big tribes might have had some fun there tho.

Also it is very heavy game for the PC so it will require allot of power to run smoothly even at med/high settings, given it is still at early access so theres hopes that it will run bit better when it is going to live.

I havent been playing it for months now so i dont really know if official servers are any better yet but the fittest of survival mode seems very interesting, i was planning to join those "hunger games with dinos" soon as i get new gpu.

Game has huge potential, hope so they can make it so that it will be awesome experience even with official servers.
This game deserves to have big success imo.

I've been talking to some of the "big" tribes on the server i'm on, and on that server things went pretty similar to a few other areas... a couple tribes dominated the map, there were giant wars, some tribes were so powerful that they'd wipe people out for just talking crap or being there... then everyone left the server. The big tribes realized that playing by themselves on a server wasn't very fun, so a couple of them have taken on the roles of "enforcers." They'll take out troublesome gigas and alphas if players ask for help, I actually had four people from different large tribes helping me tame a really high level carno, and we just sat on the beach and BS'ed while it was taming. It was pretty fun.

If anyone wants to try playing on officialserver307, for gods sakes head north, and if you need some help ask for Slanter. I'm not super high level and my base is still pretty small and stealthy, but suitably set up to be able to lend a hand.


That's already done and settled out of court. The game will continue....

originally posted by: Slanter
I think they nerfed the giga a little bit, it only does 10% damage to stone structures,


I heard they did nerf it a little bit after introduction. actually the initial giga attack did such damage that we had to move with nothing. a couple dinos we were able to salvage, but ultimately it was a complete loss. problem was, we were like jewish refugees in nazi germany..we were being attacked by other tribes, tried settling places and more tribes still attacked, etc..eventually the tribe and server itself died.
Giga killed the server.
then yeah, I heard later they scaled back the giga compared to the initial release..probably due to it being a unholy force of destruction.

I saw this thread and thought I would share a pic of this super hot next gen babe. 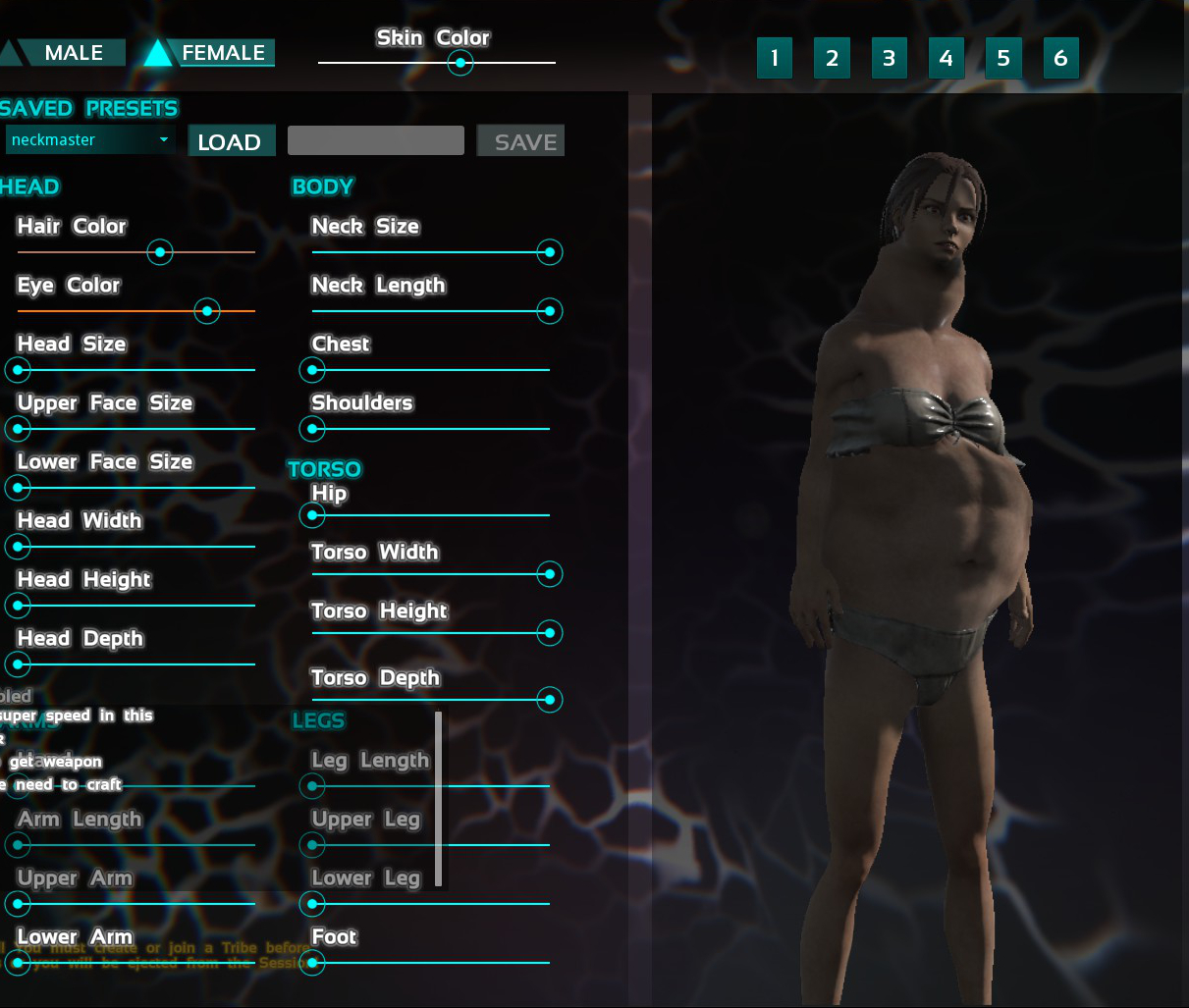 Hey thanks for the invitation, that server sounds like it could be fun then. i might take up on it when i start playing it again. I could also serve as sort of "enforcer" to help out and such.