Ok I have been a fan of Metallica from the beginning. I have collected several hundred Met show's that are legit audience sourced bootlegs.
I will not get into where I found them. But I am sure if you search hard enough there are well over 2000 full shows online, even youtube.
But I will digress.

I preordered both Metallica deluxe remasters on vinyl and received them today.

Been listening to both sporadically and I will say I am impressed. Lot's of stuff I never heard before live, and I heard a lot.

Lets start with Kill "Em" All; 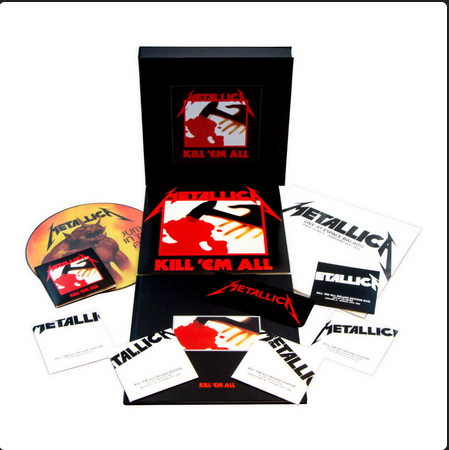 Kill ‘Em All, Metallica's groundbreaking 1983 debut, has never been more powerful than it is on this remastered deluxe box set. Featuring four vinyl LPs, five CDs, a DVD, and an immersive hardcover book, this numbered end-all-be-all reissue of James Hetfield and Co.'s initial salvo boasts a wealth of previously unreleased material and insightful archival fare that gives fans an unprecedented look at Metallica's early days. In addition to the remastered studio album and reissued picture disc of the Jump in the Fire EP, a live show from Paris in 1984, a concert from New York in early 1984, a 1983 Halloween show, and an incredible DVD of a Chicago date from the summer of 1983 take you back to the era when the group's members sported acne and ripped denim jackets. A CD of rough mixes and bootlegs from drummer Lars Ulrich's vault and a CD with in-depth interviews rounds out a completist package that also includes a patch. This is every Metallica fan's ultimate dream. Originally released in 1983 and newly remastered on this energetic-sounding analog reissue, Kill 'Em All is a thrash masterpiece and marks a turning point in heavy metal. Fusing ferocious attack with a fluid guitar style reminiscent of NWOBHM bands as Iron Maiden and Judas Priest, Metallica helped create a new style that went on to influence an untold number of groups. The San Francisco quartet never sounded more raw, youthful, or nasty as it does here. Embracing a no-life-tip-leather credo and punk-inspired innocence, Metallica takes the name and meaning of one of the iconic tracks here – "No Remorse" – to heart in every way. Ranked #35 on Rolling Stone's 100 Greatest Albums of the 80s, Kill ‘Em All features multiple songs that remain in the group's concerts to this very day – "Seek & Destroy," "The Four Horsemen," and "Whiplash" among them. The record is also famous for touting several tracks co-written by one-time member and Megadeth legend Dave Mustaine, who was famously kicked out of the band before the album's release due to his substance-abuse problems.

There is a great quantity of very early Metallica stuff, very raw and very cool!

This is what you get in the "Kill Em All" box. Track and CD list: 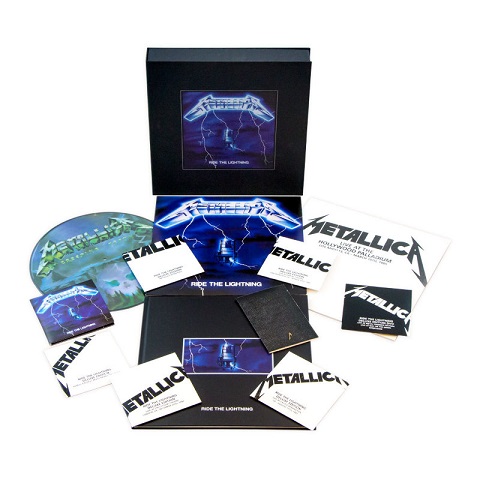 This Limited Edition Deluxe Edition Box Set includes the 2016 remastered original album Ride the Lightning on 180g LP and CD, live and previously unreleased material across vinyl & CDs, a Picture Disc EP, plus a DVD featuring live performances & interviews. In addition to the music, the box set includes a 64-page book featuring new essays, never-before-seen photos, ticket stubs, tracking sheets, and more. There is also a mini-book with handwritten lyrics, and a set of 3 posters from their 1984 European tour. Released in 1984, Metallica's second album, Ride the Lightning, is considered by some to be their best. The album contains "Fade To Black," "For Whom The Bell Tolls" and concert favorite "Creeping Death." Ride the Lightning is often hailed by fans as a classic of the thrash metal genre, and a vital bridge between the band's albums Kill 'Em All and Master of Puppets, pushing the thrash metal of the debut into progressive territory more fully-realized on Master of Puppets and ...And Justice for All. The album retains the speed of Kill 'Em All on songs like "Trapped Under Ice" and "Fight Fire with Fire," but also contains the first of Metallica's longer, more symphonically arranged tracks, such as "Fade to Black" and the nearly 9-minute closing instrumental "The Call of Ktulu." Ride the Lightning was listed at #3 on a list compiled by metal-rules.com of the Top 100 Metal Albums of All Time and #5 by IGN Music on the Top 25 Metal Albums. Decibel Magazine rated it the #1 thrash metal album of all time. "Ride the Lightning was even more stunning, exhibiting staggering musical growth and boldly charting new directions that would affect heavy metal for years to come...Ride the Lightning finds Metallica aggressively expanding their compositional technique and range of expression. Every track tries something new, and every musical experiment succeeds mightily." -Steve Huey


Ok here is what you get on the Ride The lightning box. Track and CD list:


I hope you get the chance to enjoy this and i hope you enjoyed my post.

I loved Metallica and partially lost my hearing at one of their concerts in 1994.
My ears were ringing for about 3 days.My favorite album is the Black Album.

I loved Metallica and partially lost my hearing at one of their concerts in 1994.
My ears were ringing for about 3 days.My favorite album is the Black Album.


Oh yea I been there a few times. I had massive headaches from a few show's that was definitely way too loud. But I can still hear pretty good, lol

Yea exspensive though. With shipping was close to $250 U.S.

ETA: Vinyl was pricey, Cd is cheaper. But I really wanted the vinyl.
edit on 17-4-2016 by Naturallywired because: (no reason given)

I didn't lose a lot just a wee bit.My seat was right next to one of the speakers.

posted on Apr, 17 2016 @ 09:15 PM
link
When a man lies he murders some part of the world
These are the pale deaths which men miscall their lives
All this I cannot bear to witness any longer
Cannot the kingdom of salvation take me home


Likewise, I've been following Metallica since 83 - so many of their songs take me away to times and events over the past 30 years - they, among other artists of similar genre, are a huge part of my life>

I love this stuff. I am so freakin' excited to listen to this stuff, for real.

originally posted by: CagliostroTheGreat
Never mind Naturallywired I don't want it that bad. That is a damn cool bundle though.

Yea like I said, very expensive. Metallica put out word before this that they wanted input from fan recordings and such. I thought when I heard them put out this plea Iwas like whatever, I probably heard it before. But no there is stuff on here that is elegant, and some half tracks that kinda disappointed me also, but they are full show's that sound cool, just with missing parts. Tolerable considering the rest of the show's amazing early sound.
edit on 17-4-2016 by Naturallywired because: (no reason given)

I remember the song "Jump Into fire" as "jump Into THE fire"? anyone else?

originally posted by: Naturallywired
I also think I experience a "mandella effect" today also? Maybe it's just me though?

I remember the song "Jump Into fire" as "jump Into THE fire"? anyone else? 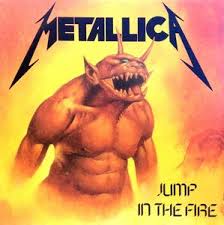 
I also discussed this with a couple old friends today and they also remembered "Jump into the fire" not "Jump in the fire"?
edit on 17-4-2016 by Naturallywired because: (no reason given)

one loses alot more than hearing listening to sell outs

I have listened to Metallica for many years and played them on guitar. Now, I prefer listening to live recordings, especially Seattle in 1989. Doesn't get much better than that.

I am going to share a dirty secret i am not proud of, back in my days of stupidity i mean youth i acquired two picture disks...ride the lightning and master of puppets, both unplayed and on the original Baktabak record label......i smoked too much and left them for some houch.......

Not only should a smack myself in the face for that others should too....anyhow material goods are not what drives me....

Master of puppets was the album that inspired me to pick up the guitar....metallica rock