What initially happened is Charlotte NC, passed a law that transgender people could use the restroom they "identified" with. Now, before we go any further, am I to understand that prior to this bill, transgender people didn't use the restroom? I know, that's ignorant. Of course they did. And I'd wager the ones who can pee standing up, went to the mens room, and the ones who must sit down, went to the ladies room. So why would this law really be an issue? (the Charlotte law) The next logical step is to make unisex bathrooms available. Now, imagine you are a business owner and the city ordinance states that you must make alterations to the existing bathrooms at your expense? All to satisfy a very, very small portion of the public. It would anger some, and bankrupt others, depending on the profit margin and cost to alter.

The NC bill HB2, made it no longer possible for a city in NC to pass a sweeping law like this. Now it must be done at the state level. That is all. There was no mandate to be mean to LGBT people, or to limit any rights they had previously. Only to put a little common sense into things that shouldn't need to be explained in the first place.

Slowly, our culture is eroding to the point were the majority is demonized for not catering to the extreme minority. This was the case with Universal Health care. (an different subject, but the same result)

If you are member of the LGBT community, and you encounter a situation where only a mens, and ladies room exists, would you not be able to function? Would you have any long lasting medical issues? If so, were there not LGBT people 20 years ago who might have had the same issues? How did they survive?

I fully admit, being a straight white male, I really don't get it. I personally feel like if you are happy, and what you do, doesn't hurt me or anyone else, that's super. You do you. But when you being you, intrudes on others, we all have to look at the collective "big picture" and find a solution. Being as how this is the first most of us have heard of any bathroom issues, I tend to think this is more of a manufactured issue than a real life crisis. If I am wrong, please explain why, and explain what should be done.

originally posted by: network dude
Being as how this is the first most of us have heard of any bathroom issues, I tend to think this is more of a manufactured issue than a real life crisis. If I am wrong,...

They should construct an inbuilt urinal using an outlet pipe as a replacement for their spine, this way they could connect an hose from that outlet pipe into a recyclable bag that fit's neatly into a rucksack... Or maybe use a tube that flows the body waste into a purse?

I really don't see any other alternative.

you know....if you invented something like that, the $ would be amazing!

The NC bill HB2, made it no longer possible for a city in NC to pass a sweeping law like this. Now it must be done at the state level. That is all.

You spent 90% of the thread talking about bathrooms and completely ignoring the implications of the state law beyond your hypothetical scenario about unisex restrooms. Did you even bother to read your own source?

What they've done is to pass a law that makes it impossible for municipalities within the state to pass any sort of anti-discrimination laws. For instance, if Charlotte wanted to pass a local ordinance that made it unlawful to fire a person because of that person's sexuality. The state law makes that impossible.

For your next trick, maybe you could provide another uninformed opinion in defense of Mississippi's HB 1523.
edit on 2016-4-15 by theantediluvian because: (no reason given)

kaylaluv
+4 more
posted on Apr, 15 2016 @ 03:22 PM
link
The law is based on a manufactured issue. Based on the religious right being pissed off that they have lost on major issues like marriage equality.

Transgenders have been going into the bathrooms of their identified gender (not their born gender) for a long time and no one has really noticed. It hasn't been an issue. Now, all of a sudden, since marriage equality has been law, the religious right is all up in arms that some pedo will put on a dress and go in the women's room to rape little girls. Coincidence? I think not.

The law is a last gasp effort by the religious right to gain back some of the control they have lost over recent years.

Also, just to educate: being a homosexual has nothing to do with being transgender, so your thread title is incorrect.

I don't live in Mississippi, so you will have to find someone else to holler at for that. I do realize that HB2 made it so any laws dealing with discrimination need to be done at the state level. So you don't have a mish mash of laws in different parts of the state. See, lots of loud people didn't actually take the time to understand this, they just believed what some other told them and started screaming about inequality.

did you read the whole thing?

I have been told homosexuals and transgenders are not the same thing so how would this affect the homo community in the first place? We are talking about a minority of a minority that doesn't feel 'comfortable'. It isn't like they aren't allowed to take a dump like the rest of us.

I saw it as kind of the opposite, but with the same results.

People used to get by, so why the push for change?

Oh, and in my defense, I offer this:

I fully admit, being a straight white male, I really don't get it.

They demand to be treated equally until they want special treatment.

Transgenders have been going into the bathrooms of their identified gender (not their born gender) for a long time and no one has really noticed. It hasn't been an issue.

I don't know what "special treatment" you're talking about. Specifics? 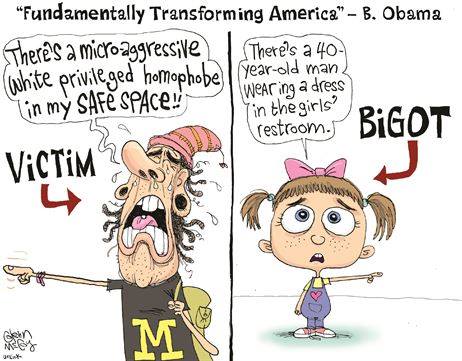 I do realize that HB2 made it so any laws dealing with discrimination need to be done at the state level. So you don't have a mish mash of laws in different parts of the state.

This isn't a very solid argument at all.

So you believe that laws should be uniform throughout the state then? Is it all laws or just laws relating to discrimination? If uniformity is the goal, why stop at the state level?

It's clear that the purpose of the state law isn't uniformity, it's specifically aimed at stopping the proliferation of anti-discrimination laws. Much like how other states' "religious liberty" laws don't actually protect any "religious liberty" and only serve to make it illegal to "discriminate" against people for discriminating against LGBT people.


As a lesbian and a citizen of NC, I must confess my confused state of mind on this issue. I am not a lawyer and have difficulty understanding the twists and turns used to write bills such as this. I have scanned through this bill. Are there any lawyers here? Can someone walk me through what is actually in this bill? I do not want a layman's interpretation. I want an actual lawyer's opinion on what is in this bill.

I'm a big boy and I can take care of myself in the Men's Room.

Something/anything happens too my wife or daughter in the Lady's Room ... you'll all probably wonder why I gave up on ATS.

“This Article does not create, and shall not be construed to create or support, a statutory or common law private right of action, and no person may bring any civil action based upon the public policy expressed herein.”

Eliminating “civil actions” simply means “cannot sue” and not being able to sue, or go to court, puts workers right back where they were in the 1970s. That is, for the first time in decades, North Carolina courts closed their doors to those fired because of their race, sex, age, disability, national origin, or religion. Those wrongfully terminated are left with only federal discrimination laws, which are largely inferior to the now defunct state discrimination claims. North Carolina joins Mississippi as the only two states that do not offer their citizens state law protection against the most basic forms of discrimination. Let that sink in.

“The LGBT issues were a Trojan horse,” added Erika Wilson, a law professor at the University of North Carolina who co-directs a legal clinic for low-income plaintiffs with job and housing discrimination claims. The broader change hasn’t received much attention, she said, because “people were so caught up in [the LGBT] part of the law that this snuck under the radar.”

Conservative-leaning groups have been trying for decades to reduce the number of civil lawsuits in the states. In HB2, lawmakers accomplished this by adding a single sentence to the state’s employment discrimination law that says: “[No] person may bring any civil action based upon the public policy expressed herein.”

Thank you. I will read and reply in due course.

Discrimination, terrible thing really, nobody should participate in discrimination because it is a bad thing...until it isn't.

LGBT groups argue against discrimination and exclusiion and yet are the greatest proponents of discrimination: try to be a member of an LGBT group if you aren't actually gay/lesbian/bi or trans-sexual.

Religious groups argue against discrimination and yet they are also hugely discriminatory: try to become involved in the Muslim Brotherhood or any other closed religious group.

Social groups are incredibly discriminatory: ever tried to join the Masons without a sponsor? What about the illuminati for fecks sake LOL.

We all have been told we have to accept or agree with those we disagree with, we actually don't have to at all. We just need to agree to disagree, and promise not to break the laws of the land whilst practising whatever exclusionary and discriminatory behaviour we see fit to engage in.

The examples I gave are clearly off the top of my head (and in some cases a joke), my point remains the same.