As an amateur photographer myself, I wonder how the film cameras used by the Apollo astronauts on the Moon worked?

I suspect they were surely purpose built cameras (I know many of them were Hasselblad cameras), but there are a few things I don't understand.

2. If not, was special film used, or does the lack of atmosphere have no impact on film?

3. How did the astronauts manipulate the focus, f-stop settings and camera controls with their bulky gloves on? (this was long before auto-focus was invented) Were the cameras just pre-set for exposure and focal length, and the astronaut had to focus the camera by changing his own position / distance to the subject?

4. How did the astronauts know when the camera was focused? Obviously they couldn't put it up to their eye and look, so how did they tell when a shot was in focus?

5. How did they change film?

6. I assume special lenses must have been used due to the increased UV, lack of atmosphere and other considerations unique to the Moon. How did they ever model these things before getting to the Moon? I guess some of it could have been done on previous space missions, but would these be enough to simulate the conditions on the Moon?

The reason I ask this is, the other day I was trying to work with one of my digital SLR's with gloves on and even that was difficult. And those are highly automated modern day cameras. I thought to myself "If you think this is bad...what the heck did the guys on the Moon have to deal with???"

posted on Apr, 15 2016 @ 09:02 AM
link
I mean, just something simple like dealing with light and shadows requires some pretty specific camera / exposure control. And the whole light and shadow thing is taken to extremes in a place like the Moon (i.e. highly reflective surface, extreme shadow due to practically zero atmosphere to disperse / diffuse light, near-black background, etc.)

How the heck did they deal with all these considerations?
edit on 4/15/2016 by Flyingclaydisk because: (no reason given) 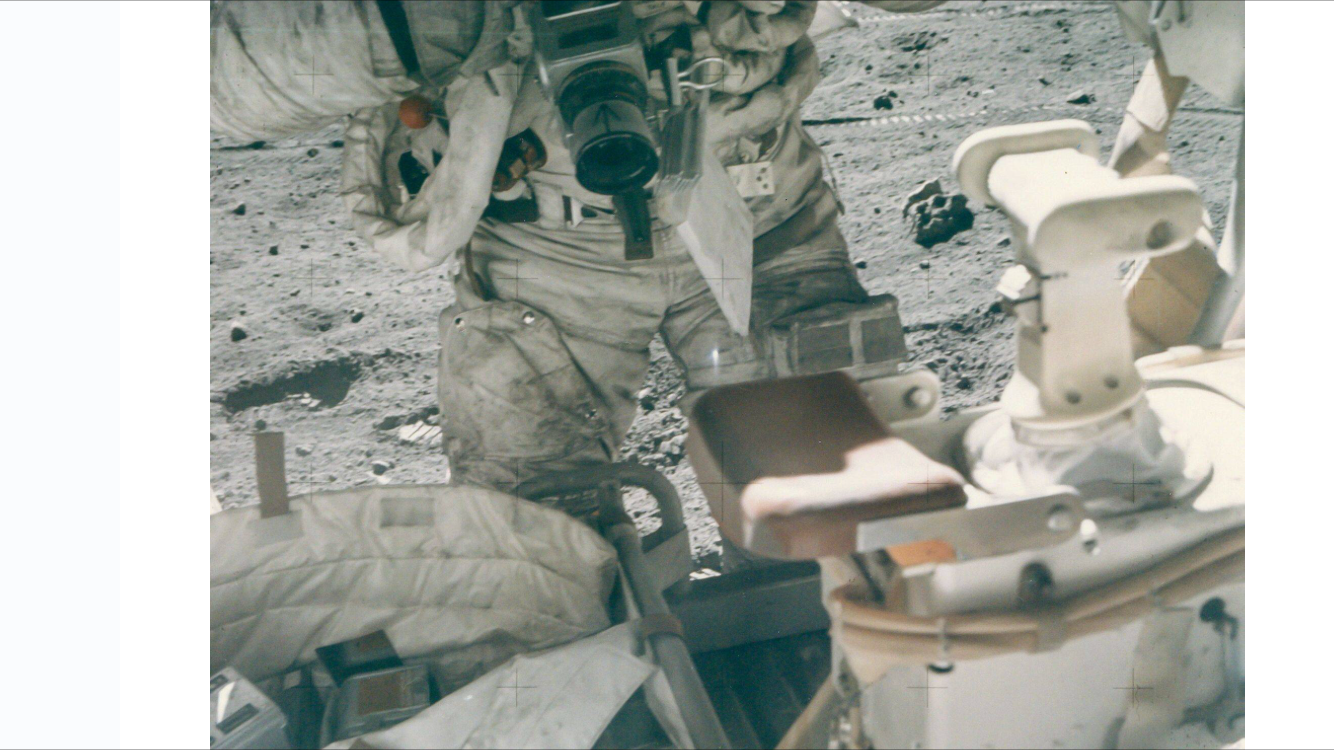 They painted it silver to handle variations in temperature between 120° C in the sun to minus 65° C in shadow, it could work in the vacuum of space. The first link here should answer most of your questions

"Ever since astronaut Walter Schirra brought along his private Hasselblad 500C on the Mercury 8 mission in 1962, NASA had been working with Hasselblad to make cameras suitable for space missions.

On the Apollo 8 mission, Hasselblad 500 EL electric cameras were used for the first time. This was used on Apollo 9 and 10 too, before two were brought along for the Apollo 11 mission. The 500 EL had an electric motor that wound the film and tensioned the shutter. The camera was supplied with two lenses, a Zeiss Planar ƒ/2.8 / 80 mm normal lens and a Zeiss Sonnar ƒ/5.6 / 250 mm telephoto lens. On Apollo 11 these cameras were used to take pictures from inside the Command/Service Module and the Lunar Module. For the surface shots, however, a special version of the 500 EL was designed – the 500 EL Data Camera."

Thanks, those links answer some of my questions.

I get the high f-stop, large DOF, logic. And it seems the astronauts did move around (themselves) to get the focus right (so I guessed that one sort of right).

I'm just still not clear on a few things. Many of the photos taken on the Moon are simply spectacular photographs (in their own right), and granted the Hasselblad cameras are legendary, but still...many of these photos rank up there with some of the finest photos ever taken (not just because they were taken on the Moon either). Most professional photographers would give a their first born to take just ONE of these shots in a lifetime...on EARTH...under controlled conditions even. The astronauts took literally thousands of them!

The Apollo astronauts had a lot of things to learn and do...and learning how to become a World-Class photographer was NOT one of these things!

I just can't seem to wrap my head around how the astronauts were able to take such fantastic shots in such a challenging photographic environment. As I noted, just the light and shadow environment alone on the Moon would take a very (very) advanced photographer to deal with (let alone trying to do it from inside a space suit with no ability to look through the lens and virtually zero dexterity due to the pressurized gloves).

I just can't understand how they were able to do it...and do it so well.

Here is a link to a 2012 ATS thread discussing technical details of the Hasselblad cameras and film used on the Moon. It is 7 pages long.

No link, but I think I understand about the camera itself now. I guess I'm still unclear on the process though.

I'll look forward to the link.

The cameras were left on the Moon, due to weight considerations on lunar liftoff, just an interesting fact.

posted on Apr, 15 2016 @ 10:18 AM
link
Here is a link to a site that explains lunar photography:
Lunar and Planetary Institute

Do any of those links go into the details of dexterity needed to operate such cameras? If not rather a waste of time. Thanks for thought provoking thread .

Do any of those links go into the details of dexterity needed to operate such cameras? If not rather a waste of time. Thanks for thought provoking thread .


Here is a link to the Daily Mail article that has photos of a Hasselblad camera that came back from space.... but not the Moon.
They explain some features and how the cameras were modified with larger tabs and handles to facilitate their use while wearing Gloves.
LINK

posted on Apr, 15 2016 @ 11:34 AM
link
a reply to: Flyingclaydisk
I have wondered about that myself. Also this shot of the capsule leaving the moon, it zooms a bit, then follows the ascent...How? And how did that attain the footage?

One of the cameras was lost in space during Gemini 12 EVA, as well. (Michael Collins describes this in his book: "Carrying the Fire"). Not sure, but I think it probably burned up in Earth's atmosphere.

Also, I realize the topic is regarding the cameras used during Apollo missions, however, I believe that the earlier missions were essential for any sort of success with the later moon missions.
edit on 4152016 by seattlerat because: my spilling sugs

I'm sure there are some for sale out there, no luck on Ebay today though, just the film, cartrides and wind-crank www.ebay.com...

Thank you friend. We film at work. I had a idea after I saw this thread.

The story is that it was done back at mission control somehow. Timing the liftoff and coordinating it with the camera.

originally posted by: ugmold
a reply to: Flyingclaydisk
I have wondered about that myself. Also this shot of the capsule leaving the moon, it zooms a bit, then follows the ascent...How? And how did that attain the footage?

It is all explained in this article: Universe Today

As the Smithsonian National Air and Space Museum explains in a 2011 blog post, the camera was available on Apollos 15, 16 and 17. The television camera communicated from Earth using a high-gain antenna on the rover, but there was a slight time delay for the radio waves to travel (a couple of seconds) between the Earth and the Moon. So the engineers suggested moving the rover a certain distance from the lunar module and setting the camera to automatically tilt to show the lunar liftoff when commanded from Earth. That was the plan, at least. On Apollo 15, the tilt mechanism malfunctioned and the camera never moved upwards, allowing the lunar module to slip out of sight. And while the attempt on Apollo 16 gave a longer view of the lunar module rising up, the astronauts actually parked the rover too close to it, which threw off the calculations and timing of the tilt upwards so it left view just a few moments into the flight. Ed Fendall was the person doing the controlling. In an oral history for NASA done in 2000, he recalled how complex the procedure was. Now, the way that worked was this. Harley Weyer, who worked for me, sat down and figured what the trajectory would be and where the lunar rover would be each second as it moved out, and what your settings would go to. That picture you see was taken without looking at it [the liftoff] at all. There was no watching it and doing anything with that picture. As the crew counted down, that’s a [Apollo] 17 picture you see, as [Eugene] Cernan counted down and he knew he had to park in the right place because I was going to kill him, he didn’t — and Gene and I are good friends, he’ll tell you that — I actually sent the first command at liftoff minus three seconds. And each command was scripted, and all I was doing was looking at a clock, sending commands. I was not looking at the television. I really didn’t see it until it was over with and played back. Those were just pre-set commands that were just punched out via time. That’s the way it was followed.