101 Years of the Income Tax

posted on Apr, 14 2016 @ 06:10 PM
link
Well it's been over 100 years since the Federal government began the massive ongoing campaign of super funding anything an everything with money mostly from taxes.

Yes, taxes pay for all the massive programs and bureaucracies that have sprouted up since 1913 when the government got the 16th Amendment passed.

An article has a table that speaks for itself.

There is no "story", just the table.

The IRS was created in 1913 at the same time as the Rothschild’s Federal Reserve to be it’s Collections Mafia to be sure the USA paid the Interest on the money the Fed had created from thin air and loaned the US Treasury. They even have their own Court System. 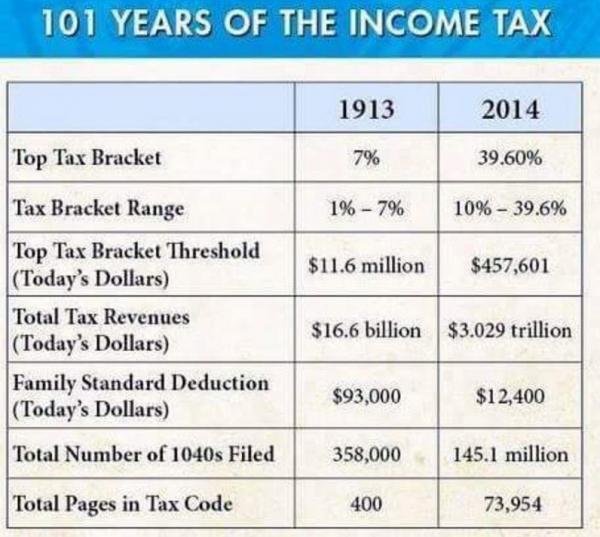 So why has the government gone so crazy with the binge taxes and binge spending ?


It wasn't made for people to understand, it was made to legally fleece the public because they DON'T understand. That chart makes me sick.

posted on Apr, 14 2016 @ 06:21 PM
link
THe Family Standard Deduction speaks magnitudes on the value the govt. puts on family and raising kids. Back then the deduction was 93,000 It was more important for the govt that you spent that money seeing to your family. In a way investing in the nations future. It was like they were saying "no, you keep that money and use it to support your family."

Now look at it. You only get to put aside 12,400 for your family. That's all their "worth" that all the investment in them we say is healthy or right. I read it like. "We don't care about Americans. We just want to spend YOUR money" it reeks of pathology running our nation these days.

Damn they devalued family and investing in the nations future less than one seventh of what it rightfully was and should be. disgusting. If that doesn't paint the psychological profile of your typical IRS or State Tax Board representative or employee then nothing will. They simply don't value the citizens. we are simply cattle to be farmed and milked.

working as intended. they don't want the average citizen to understand it. a maze created for the corp to dodge whatever they want


So why has the government gone so crazy with the binge taxes and binge spending ?


Because they can, and they know we aren't going to do a damn thing to stop them.

Nope. War causes debt. When a country has an effective tax system in place, they are more liberal about going to war because they can cover the debt. The Civil War was a long time coming before it started, and was over as quickly as possible. Vietnam, on the other hand, came immediately after a false flag and lasted until France asked for silver in return for it's paper dollars.

I do appreciate the military fire departments and police officers though.

You do realize that in 1913 there were less than 98 million people in the entire US?

And the average family consisted of more than just 2.5 kids?

That doesn't leave a whole lot of people to file tax returns.

You also realize that the vast bulk of the current tax code was written by lobbyists/lawyers for the purpose of excluding from "taxable income" as much Corporate and Shareholder (read: Rich Fat Cats) wealth as possible.

posted on Apr, 14 2016 @ 08:17 PM
link
That chart is surreal, it makes me sick.. everything is so backwards. I don't even know what to say, I wish I could fix this, but really what can any of us actually do at this point? That's how I feel, anyway.

The family standard deduction really gets me though. That money could be the difference between a kid growing up in a healthy home or in a dysfunctional one in a bad area.. and we all know which one has a better chance at being successful and making it in life. 12,400 to support a family? Give me a break.


Didn't you just create a thread promoting a 90% tax on capital gains?
edit on 14/4/2016 by ChaoticOrder because: (no reason given)

I do appreciate the military fire departments and police officers though.


Everything government NEEDS to fund, can be funded with sales tax and tariffs. No income tax necessary.

posted on Apr, 14 2016 @ 09:58 PM
link
I've often wondered if they breed IRS agents in some sort of underground lairs and train them math and only math. No love, no feelings, no compassion just math, I mean why would any good standing American want to be complicit in the financial raping of his fellow American. Something shady with these IRS agents...I smell clones *Que spooky music*
edit on 14-4-2016 by RainbowPhoenix because: (no reason given)

Unskilled and unproductive people exist in higher numbers than ever before so what you have is a parallel between the tax rate and the number of people that rely on Government handouts. There simply aren't enough people choosing to work anymore since they can get free rides from the Government.

The thread is addressing real issues we have with our tax system and not my overall views on taxes.

If you actually read the thread carefully instead of just the title you'd be up to date on where the conversation is at what I'm really talking about.
edit on 4/15/2016 by onequestion because: (no reason given)

IRS Seizes Over $100,000 From Innocent Small Business Owner, Despite Promise To End Raids.

McLellan claims he didn't do anything wrong.

The IRS has never alleged he committed a crime nor has the agency brought any criminal charges against him.

Instead, McLellan, 50, was verbally accused of structuring cash deposits to avoid bank reporting requirements, under a measure originally meant to target drug dealers, terrorists and others trying to launder money through criminal activity.