posted on Apr, 11 2016 @ 10:22 AM
link
You have to admire Stone Age man for getting in a boat/ship with a Red Deer. The set of balls that took are just shocking. Personally I'd rather set sail with a Cougar long distance than a Red Deer.


David Stanton of Cardiff University, the co-author of the study said that the results of their study showed that Neolithic humans were shipping deer by sea about 4,000 to 5,000 years ago, according to a report of News Discovery. The study printed in the Royal Society journal Proceedings of the Royal Society stated that the DNA analysis showed that deer in the northernmost islands of Scotland were unlikely to have come from Norway, Ireland and mainland Scotland. 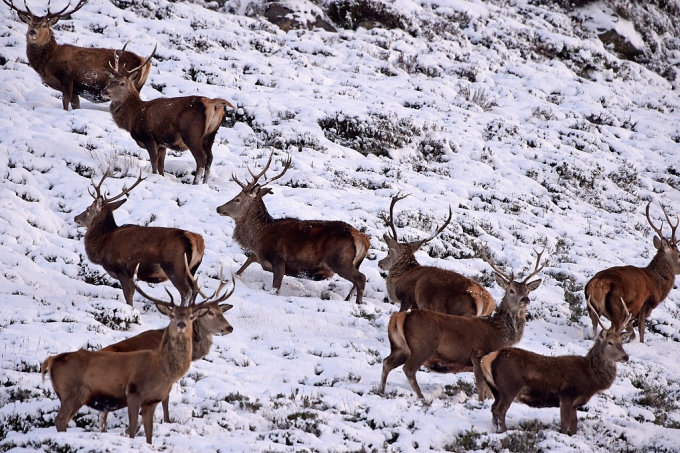 
Here is one I met, pissed as heck and given the chance would have nailed me in a heartbeat. It's not the horns that will mess you up it's those two spikes that will rip you up, for those unfamiliar. 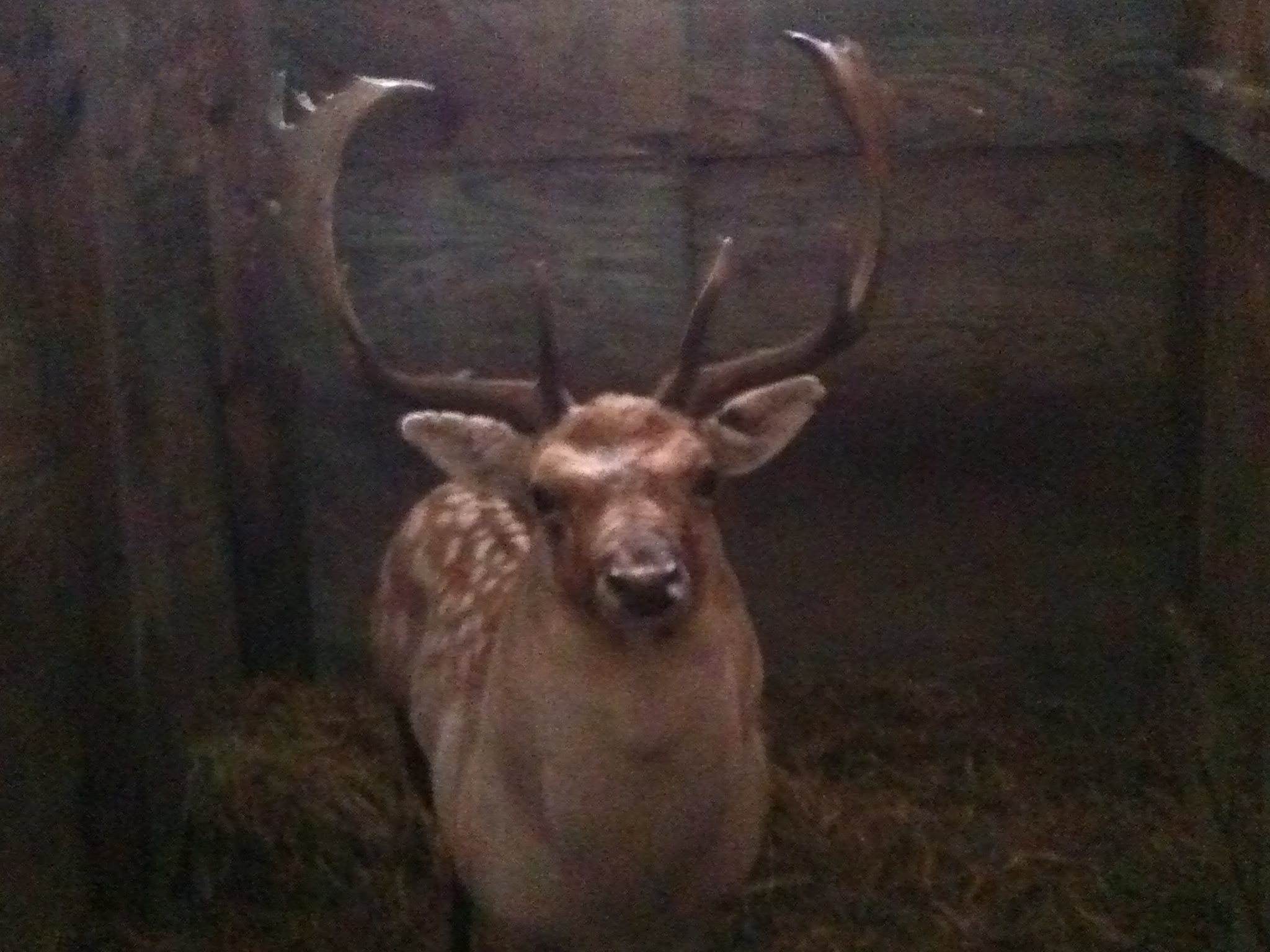 Personally I liked the article from the UK Daily Mail better, but for some reason I can't link that one, I should be ashamed for even thinking about it! LMAO!!! Please google it yourselves for a great read.

DNA analysis revealed that deer on Scotland's northermost islands were unlikely to have come from the closest and seemingly most obvious places - mainland Scotland, Ireland or Norway, said a study in the Royal Society journal Proceedings of the Royal Society B.

"Our results imply that Neolithic humans were transporting deer considerable distances, by sea, from an unknown source" some 4,500-5,500 years ago, co-author David Stanton, of Cardiff University, said.
www.telegraph.co.uk...

This is a shocking find by David Stanton. It admits Neolithic Man was not only quite the sailor, but hauled livestock from far off lands and here we thought our ancestors just hung out playing with stone tools and was a localized homebody. Of course this will need further studies, but I'd always suspicioned there was much more to history than we've been taught. I've been convinced for a long time tons more went on that we can imagine, we just haven't found all the evidence. I'm also surprised this hadn't been posted before!!

Noah's Ark made a stop at Scotland!??

I bet SLAYER69 will appreciate this thread.

originally posted by: Raggedyman
Why would they ship full grown adult deer instead of younger smaller deer

I know, right??!!!
First thing I thought of was the old Monty Python skit about the Penguin on the TV, and lions from the zoo with the relevant line being " don't be silly, they stamp them property of the zoo when they're SMALL!"

However no one knows how they achieved this and I prefer to think they had balls big as a supernova getting into their ships with these critters.

originally posted by: FamCore
a reply to: Caver78

I bet SLAYER69 will appreciate this thread.


I can't wait till Slayer wades in on this too!
( blushing) you're very welcome!!

Didn't do it for the kudos tho, just HAD TO post this since it was overwhelmingly amazing.

Figure 2.
Bayesian phylogeny constructed using MrBayes v. 3.2.2 of all comparable ancient red deer samples, generated in this study and in previous studies, from Ireland, the Outer Hebrides, Orkney, the Inner Hebrides/mainland Scotland and Norway. The tree was rooted with Cervus nippon as an outgroup. (Online version in colour.)


Yes, that was what I used to think too. But it seems we were wrong; there were regular seafarers, and elaborate trading networks too, way back in prehistory. Somebody picks up an obsidian blade in France and, when analysed, the stone turns out to be from a quarry in Turkey or someplace equally far away. Mind-expanding stuff; I no longer think of preliterate peoples as primitives. Not in quite the same way, at least.

This is a particularly interesting study, because the claim is that the ancestory of mainland Scotland's deer is different from that of Orkney and the Outer Hebrides. When you think that there was an extensive Neolithic culture on Orkney, you can't help but wonder if the UK experienced a top-down (from North to South) cultural expansion, and similarly a west to east (across Europe) expansion again. Just some musings.

Hopefully there will be a follow up report with the findings.
Thanks for posting.

You said it much more eloquently than I have been able to articulate.


It stands to reason just surviving back then took a massive amount of smarts, ingenuity and fearlessness. That said we've for far too long considered "primitives" as less-than which is a big mistake. As you mentioned just the trading and travel alone that we know of is pretty mind-boggling. Because we are so condescending we've failed to even look for more evidence of "astounding" achievements, and those we have found have been reduced to the lowest common denominator.

Add to this many possible archeological sites are currently under water from rising sea levels I think we're giving ourselves short-shrift on what actually went on back then as opposed to what we'd like to think happened.

Now many folks will chime in with Hey! Pyramids! Hey! Machu Pichu! Hey! Stonehenge!
But there is so much more!!!

All across Northern Europe were trade routes we know little about. We mainly know they existed because of the relics left behind - that and the gene markers. For example, there was a jadeite hand-axe found in south England that had been quarried in Austria. Then, from a later period, we've found bog bodies in Ireland and England that had 'hair gel' from pine resin that (iirc) was sourced in Spain.

It makes me wonder how much overlap there was in dialects and languages. Bearing in mind that we've always been territorial, it's intriguing to consider how the trade was accomplished.

When we see the 'mummies' of the Chinese steppes and their Northern European physiologies and tartan cloth, it's more evidence that people ventured far and wide for commerce.

posted on Apr, 11 2016 @ 02:18 PM
link
Highly likely that they were hog tied for transportation. We have a natural propensity personal safety.
We had rope back then, makes sense to use it.

We are pretty much taught that in school.

If you think about similar recent findings, such as the late Neolithic Irish population coming from Russia/Ukraine (ie Scythia) it begins to paint such a vibrant picture of the late Neolithic/early Bronze Age. At first read of the article above, I assumed that these deer would have been brought over Doggerland, hence why mention boats? But this really does look as if the maritime trade of that era was fairly buoyant (excuse the pun) which is really quite exciting.

Aside from intestinal worms and sky-high infant mortality etc, I imagine those times as quite beautiful. Smaller populations all spread out and a clean environment thriving with life. Not a 'golden age' although it had many upsides.

The idea of trade caravans spanning from N Africa and all the way to NW Europe and across China and India is a compelling one. When I mentioned the 'hair gel,' it's one of those domestic details that brings the dead back to life for me.

Is it Clonycavan Man you're thinking of, with his Spanish hair gel?
I'm like you, I think it would have been a wonderful time to be alive but I have a very romanticised view of it. All those burly tattooed warriors roaming about, a couple of swarthy Phoenicians in the ports....
Whoo!

That's the fella. Little shortarse with a high haircut

Your idea of the men might be accurate. The women though?! I'm picturing hairy ladies scratching their nits lol

posted on Apr, 11 2016 @ 03:25 PM
link
If you ever get the chance to travel to Glen Coe in Scotland, Their are a couple of Vans sitting at the top of the hill above Bridge of Orchy, just to the left of the road at the top bend. One Van sells Fast Food the other Scotland Tartan Loch Ness monster tat.
Every year for a good 12 years or more Some Red Deer come down for a feed knowing it's that time of year again..(tourist season). They seem to either understand that the Vans mean yum yum, or the waft of a greasy joe's from miles away brings them in. Ever seen a Red Deer eat a Burger and Curried Chips.?

They will eat anything you give them. I stopped short of getting too close though. Arms and Doughnut length at all times.

And before anyone bounces in with ...

"Oh, you shouldn't be feeding wild animals with Chips and Pies and Burgers and stuff. It's bad for them"....

Your Lucky i never shot one and chucked it in the Back of the van.
edit on 11-4-2016 by Soloprotocol because: (no reason given)

I don't care how much organic ruffage and healthy eating you do, Everyone, everything loves a good dose of junk food now and then. Frankly if out in the middle of nowhere, I'd knock you down for a decent batch of fried chips!
Yum!!