It came from outer space, and landed in federal court 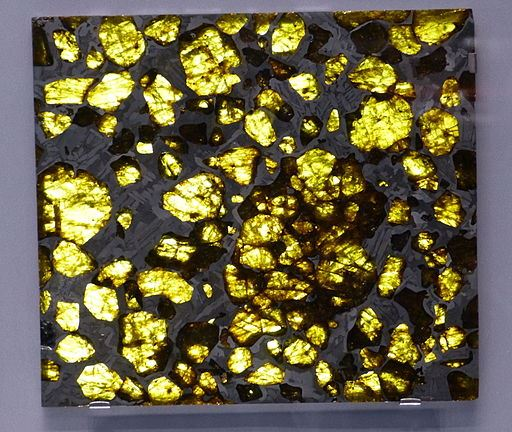 It’s not just any rock but the famous Fukang meteorite, a sparkly slab of greenish crystals that is said to be one of the greatest space rocks ever discovered. Exactly who owns it is the subject of a federal lawsuit filed in San Francisco that reads like an Isaac Asimov sci-fi tale.

One man from Novato, CA claims its his. A couple from Massachusetts say they paid that same man $425,000 for it and that it rightfully belongs to them. The man from Novato claims he cancelled the sale after he found out the couple were running a rock museum in Maine.

The Massachusetts couple claim he cancelled due to buyers remorse, allegedly after realizing how much more he could have sold it for. If that wasn’t enough, a New York rock broker and two Kansas rock polishers claim they’re also entitles to a piece of the pie.

The tale begins 4 billion years ago, give or take an eon, when the meteorite plummeted to earth and landed in the Gobi Desert of China. In 2000, it was discovered, and pieces of it began to be sold to well-heeled rock hounds, one of whom was Stephan Settgast of Novato, who said he bought a 220-pound slice of it in 2004.


Court documents say that in 2014, Mr. Settgast agreed to sell the rock to Lawrence Stifler (lol), and Mary McFadden of Brookline, Mass. through an NY broker.

But after the rock polishers, Keith and Dana Jenkerson of Osawatomie, Kan., who had been hired to spiff up the meteorite for its new owners, said they thought it was worth perhaps $1 million, Settgast decided he wanted his rock back, the Massachusetts couple say.

Settgast went to the Jenkersons’ studio and, while they were away at a rock show, entered the premises and took back the meteorite. It was a clear case of meteorite-napping, said the spurned buyers.


The gentleman who originally sold the meteorite claims he took it back because the couple had planned to put in on display in their museum in Maine, which in his words, “violated the terms of the sale.”

The couple who bought the rock are now even more upset because Mr. Settgast has both their money and the meteorite. The original owner has sued the couple in order to invalidate the sale so he can keep for himself.

Settgast’s lawyer is of course egging him on by saying, “nobody knows what a one-of-a-kind meteorite is worth. Its not like a Toyota.” That sweet meteorite pie sure looks tasty!

Court documents suggest one reason the rock polishers valued the rock at $1 million is that they believed they were entitled to 5 percent of its value for their services. They were seeking $50,000 for spiffing it up, instead of the $20,000 they had been promised and eventually accepted.

Senior scientists at the Exploratorium in San Francisco agrees, “we have studied lots of meteorites of this kind. It doesn’t need to be in a museum." Seems like a pretty lame answer to me! Maybe he likes pie?

Well, it doesn’t need to, but putting it on display seems like a nice gesture. Just once, something as rare and beautiful is being shared with the world rather than tucked away in some private collection, only to be gawked at by people who sip their tea with pinkies out. Why would it matter to the one who sold it what the next owners plan to do with it?

posted on Apr, 11 2016 @ 08:50 AM
link
A deals a deal.....and that's that....
If you sold your house and people were living in it....could you go and move back in while they were on holidays?
This is the yankee way it seems ....reneging on deals after the fact is pooor form....stealing from someones home is ...well...theft...
Doesn't matter if the item you stole once was yours but you sold it...
Why aren't these people charging the dude with theft?


I managed to find the lawsuit.

As for the deal, I wonder what the agreement in 2014 actually consisted of? Was it an actual transaction receipt or some informal agreement through e-mail? This is why we pay lawyers to split hairs and ask their clients to play ignorant. I'm at work and will glance at the PDF when I get a chance.

posted on Apr, 11 2016 @ 10:17 AM
link
a reply to: eisegesis
Its been face cut from a larger piece to expose the Olivine crystal and metal lattice.

After he learned it was worth a lot more he decides to steal it back?

according to this he has their money and the meteorite. So he did sell it (all sales are final) and he burgled their offices while they were away?

But after the rock polishers, Keith and Dana Jenkerson of Osawatomie, Kan., who had been hired to spiff up the meteorite for its new owners, said they thought it was worth perhaps $1 million, Settgast decided he wanted his rock back, the Massachusetts couple say.

Settgast went to the Jenkersons’ studio and, while they were away at a rock show, entered the premises and took back the meteorite.

This is his argument,

In a federal lawsuit, Settgast says the dealer committed fraud by making a sale with a museum instead of a private collector.


If I'm correct, they own the museum so... where's the beef?
Obviously, they counter-sued...

“After the meteorite was cleaned and polished the Jenkersons stated, inaccurately, that the meteorite was now worth $1 million,” the lawyer, Jeffrey Valle of Los Angeles, wrote in a March 29 filing. “Settgast decided he now wanted the meteorite for himself and, in an outrageous act of seller’s remorse, he decided to steal it back.”


Rocks from space are cool, but nothing to lose your integrity over. Looks like greed got the best of him.

Yah, he did sell it, releasing interest ultimately, and then stole it back. Unless his clause specifically state they owe him royalties or something…

He should go on down the road like I used to after selling something valuable for a dollar at the flea market.

I still twinge occasionally, but I'm not going to go break into their place and steal it. Judge will probably throw it out.

In Vegas he'd be in the cell next to OJ, lol.

posted on Apr, 11 2016 @ 02:16 PM
link
Only to you Smurf....
The agreement was that it would end up in a private collection.....
I think that is actually an unreasonable caveat but the court will decide....
It certainly did not give the guy a licence to steal it....
My judgement would be in the buyers favour.....

originally posted by: bandersnatch
Only to you Smurf....
The agreement was that it would end up in a private collection.....
I think that is actually an unreasonable caveat but the court will decide....
It certainly did not give the guy a licence to steal it....
My judgement would be in the buyers favour.....