Wanna see more stuff I gave away for a few bucks or for free? No? Understandable. It's too painful.


Ah well, saving up in heaven, can't take it with you and all… you can give it away now, or have it taken after your gone.

Thats why I partly stopped selling my wares at flea markets, because too many hawks take advantage. If they can't buy it for a dollar they'll take it when your back is turned. I always justified that hawkish environment in my mind because the stuff I found was free (no bottom line), I had no attachment to it like sentimental or paid full retail reasons. Other people who are forced to sell their belongings they paid retail for get a big surprise out there.

You might do well on Ebay or a local equivalent. if you haven't already tried. Here in the states we have craigs list, ad space is free, local people will respond to good deals. You got the gift of creativity and know how to bring pics…
edit on 9-4-2016 by intrptr because: spelling


I had no attachment to it like sentimental or paid full retail reasons.

Dude! I'm a woman! I love jewelry! Especially the ones I made myself. Here is the last one I'll show. I kept it for myself. I just like that sh!t...I do myself. 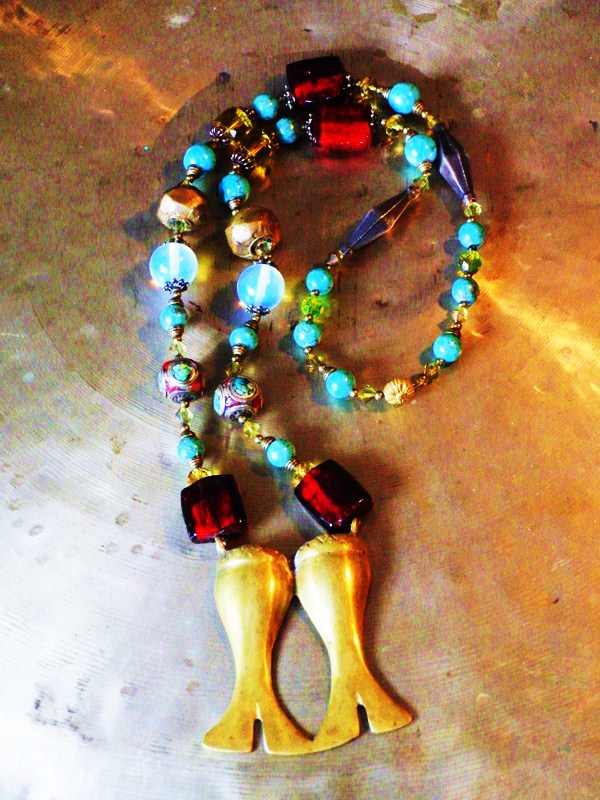 Very elegant. And 'bright'. You're a lot of fun I'll bet.

At least I'm proud to claim that what name anybody had ever called me, nobody called me a bore.

That is quite lovely, 'Star.

I like the matching earrings. I can think of many women in my life who'd love to have those in their jewelry collection.

That is nice, too.

You and Night Star, totally different styles, yet I really like both.

I NEVER EVER wear necklaces (well, except for in my photo here, I love pearls, even fake ones, but I basically never wear anything, lol). It's like I don't know how... cause I feel like they look weird on me. Any tips?

I kinda wanna make some strange jewelry things out of polymer clay one day when I have the time.!

I don't know if I am crazy, but the voices inside my head keep telling me I'm not and that everybody else is.

At least yours speak in your native language. That must be nice.

All that chanting.
edit on 9/4/16 by argentus because: (no reason given)

At least yours speak in your native language.


That reminds me of something. I talk in my sleep and it isn't in English. My sister in law heard me on a camping trip (almost everyone in that area did) and she said it sounded Algonquin. That's how I know I'm crazy.

That would pretty much lock it in for me also.

I am crazy because, i have forgiven the people that did me wrong in my life, but cant forgive myself for the smallest things.

Sorry for my cold-hearted first reply, dukeofjive696969. I read some of your OP's and understand how you feel. I was depressed for some years in a row also. It's a messy place to be in.

I thought you might be someone who pitys himself for the wrong reasons. Seems I was wrong. I thought, "yeah, once again someone who "forgave" others but not himself first, so that his forgiveness is complete."

And if you haven'd done anything that is absolutely wrong, forgiving yourself should not be a too big problem anyway.

Know what I mean?

I just lack compassion for people who lived a lie and then get depressed for betraying themselfs all the time. In my case, I was depressed because I directed my righteous anger against myself instead of acting upon it in a non-violent way, which I do nowerdays.

Release your anger in a healthy way, if you realy haven'd done anything wrong were now others suffer from.

My anger was born out of the helplessness I felt in a world in which being a narcissist is the best response to the coldness our society has in store for sensible and sensitive people, who refuse to submit to its rules.

Anyway, I'm sorry for having been rude.

Beautiful pieces both of you.

(I too make and sell jewelry as a side hobby)

I don't even wear jewelry !

Other than my wedding ring and a pair of small silver hoops that I've had in my ears for several years... I don't even wear the stuff. I'm just not a bling bling-y kinda gal... but I love making the sparkly stuff and seeing it on other people.

Maybe my plain-Jane personality (ponytail, jeans and t-shirt country bumpkin) is causing me to live vicariously through other people by way of sparkly bling bling ?!

I get that. You like to see it on others, because it makes them happy. It does nothing for you. I feel the same way. I've made jewelry off and on -- mostly semi-precious stones -- for the last 20 years. Don't care for it much myself.

Am I on the right track?

It does nothing for me but dang if I don't love making and looking at the artistic aspect of it and seeing the stuff on other people.


That must be where the 'crazy' part comes in.

It's a special kind of crazy that only good people can enjoy.

Maybe that's why people like it so often. Something of the maker is put into the piece.

To save my relatives money I pee in a flowerpot and pour it down the sink. Then just run the tap a bit. I know that's weird but it's very convenient. But hey. At least I don't poop in the sink.


I NEVER EVER wear necklaces (well, except for in my photo here, I love pearls, even fake ones, but I basically never wear anything, lol). It's like I don't know how... cause I feel like they look weird on me. Any tips?

Wearing jewelry is not everybodys cup of tea. Some are well dressed without it. Seems as if you're one of those. In my case I never leave the house without wearing my full garment: ear-rings, rings, a necklett and a feather in my hair. I must have been some indian woman in another life-time. And also a native american, because of my other crazy obsession: I collect feathers I find on my walks through my neigborhood.

And I'm vain, of course. I like to look into the mirror and what I see should make me think, "yeah, she looks like a real
funky chick."


I don't even wear jewelry !

Maybe you're also one of the lucky ones, who are not vain and look naturally good in a regular outfit. I just need to pump myself up, it seem. I have the funky-gene, because I have four fake-fur coats: tiger, leopard, cow and another leopard in a different colour. But I'm a miserable guitar-player. Only with some good old effects like wah-wah I sound a tiny little bit cool.


Maybe my plain-Jane personality (ponytail, jeans and t-shirt country bumpkin) is causing me to live vicariously through other people by way of sparkly bling bling ?!

Personally, I enjoy seeing other people dressed in a unique and stylish way. Make live more interesting. Here in my hometown I encountered some woman who saw me and said something like, "cool coat", or "nice necklett." I also do that if it fits the circumstances. It's fun. Just give it a try some day.

To save my relatives money I pee in a flowerpot and pour it down the sink. Then just run the tap a bit. I know that's weird but it's very convenient. But hey. At least I don't poop in the sink.

I have the strong feeling, as some sort of shaman, that I know who you are in real live.