Personal flight has long been a goal of many people. Whether its jet packs or flying cars or other attempts, we haven't quite given up on everyone being able to do a jetsons and fly away. New Zealanders have their 'fan pack' (they call it a jet pack, but its not a pack or a jet...) in development.

The Germans have the Volocopter. And its just had its first manned flight. 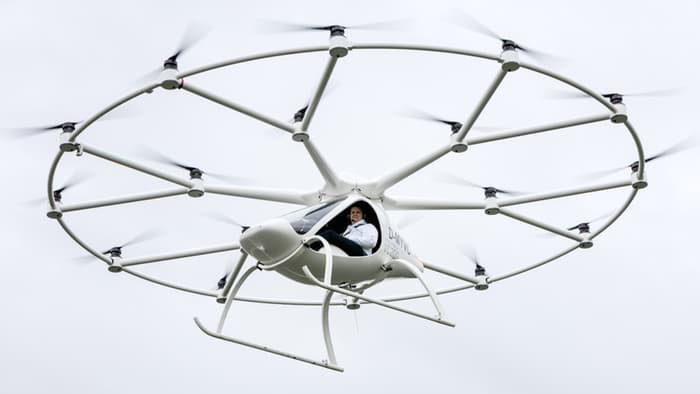 Think if you were to stick some lights around the circular air frame and fly the thing at night you would be guaranteed at least a few UFO reported sightings.
edit on 9-4-2016 by andy06shake because: (no reason given)

posted on Apr, 9 2016 @ 10:44 AM
link
The giant circle of rotating death looks formidable, and too unwieldy in this form for landing takeoff, taxi manouvers in tight air and land space...just my HO.....
edit on 9-4-2016 by bandersnatch because: (no reason given)

posted on Apr, 9 2016 @ 11:07 AM
link
Interesting design. Basically the same as those commercial drones.

posted on Apr, 9 2016 @ 11:35 AM
link
I would have protective metal bar casing around the propellers like some drones have. Much safer

Adds to the weight through and since the "Volocopter" is still in the prototype stage unnecessary just yet.

Dubai has edged closer to its goal of launching a pioneering hover-taxi service, with the authorities announcing a successful "concept" flight was made on Monday without passengers.

Authorities anticipate five years of testing to put in place safety procedures and legislation governing the cutting-edge mode of transportation.

Yeah,... no. I'm not getting into a plastic drone running on batteries! Even with extra battery packs and parachutes! They trap you inside and demand money! Or land you below ground and work you over with lead pipes!

The idea might be cool but the current level of tech is not there (imo).

posted on Sep, 25 2017 @ 07:19 PM
link
They'd get a lot more bang for buck (not to mention weight) going with a turbine generator compared to batteries at the moment. Odd choice.