Mostly likely your story has been posted

So, what you're really saying is "It might be, but I didn't check myself before I smugly tried to berate you publicly" yeah?

and as for your following comment "the newbie" ?? Are you having a fricking laugh or what? you did check my profile date before you put fingers to keyboard. Try some research yourself Kratos40, it seems your attempt at "big note" humor was a fail.

Thanks mate, appreciate it. It seems others are keen to let bygones be bygones. Odd?

I was always of the conclusion that something may have made an off the cuff suggestion during a conversation (be it in person, on the street or telephone) that, "wouldn't it be awful for your family if you were to suddenly die" or something along those lines. Think about it. You have hacked the worlds "supposed" most secure place, learnt secrets you shouldn't and went public. What would stop you in your tracks? For continuity and not raising further suspicion, you're allowed/permitted to spruke your original strory to death, but anything new added to the pitch and we'll be watching.

originally posted by: OneBigMonkeyToo
It may be a horse's mouth, but it's a visually impaired 3 legged horse.


Its funny you should ask that, because I just put up a thread with photos and videos.......enjoy!

I was expecting a 3 legged horse

posted on Apr, 9 2016 @ 10:16 PM
link
at the time british activist Dan Bull wrote an open letter to the then home secretary Alan Johnson, what follows is
legen...

If you do research you'll find US has space bases

Pentagon even made a deal with predatory type of aliens

Birds of the feather flock together

Your friend needs to learn how to use the focus button when he's filming a helicopter.

If you do research you'll find they have no such thing, and no-one has ever done a deal with aliens.

I am not being dismissive at all of Gary. He is a wonderful dude to chat with. He believes what he says. It's his opinion on what he saw and he had preconceptions while sniffing around in NASA's back door for a couple years already. Those preconceptions didn't really present themselves. He had more questions than answers at the end of it all.

Just be reminded that he was diagnosed as having Asperger syndrome. He is on the spectrum for sure and is a very high functioning person. This is what saved him from deportation to the US thank goodness.

With that said, you decide. But if anyone mentions Asperger syndrome regarding Gary. Don't let it fool you into thinking there is no validity in what he says. The possibility is there. He is speaking out now I imagine to gain some funding to live on as well sharing his experiences. People have asked him repeatedly to speak out publicly and he gets invited to formal and informal gatherings often in the UFO community. He was fearful of reprisal for a long time from the US & British Government. I guess he either has thrown caution to the wind or his Lawyer said it was fine within certain wording.

I spoke to him via telecommunications for an interview quite some time ago. Just a wonderful person to chat with. And he really does inspire for the imagination to see all the possibilities. This guy was hacking the NSA on dial-up folks. There was no real safe guards keeping him out either. It was simple error that got him caught.
edit on 4-10-2016 by Flint2011 because: Typos

That one is a handicapped donkey with a speech impediment

How do we even prove space exists. There is no space

What's this floating in then? 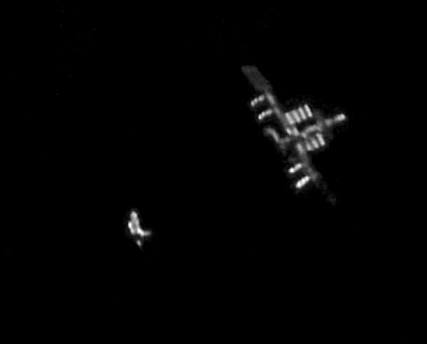 You think you're being clever, but you're not, you're just showing your ignorance.

Sorry but look how long it took to build the ISS and that's with help and finance from other countries.

Don't believe a word if the claims.

There's not 1 real photo of earth. All just fake composite images. With 1000 satellites we should have 100,000s of real images of earth. We have none. Because there is no space.

Its not from NASA, it's from one of the thousands of amateur astronomers that take photos like that.

I didn't realise that the video and photos that come from the ISS were composites?

* In Building 8 at Johnson Space Center, there is someone whose job is only to airbrush UFOs from images, since they are so commonly captured.

I'm sorry, lol. He found that out by hacking their computers? I doubt that very much.

"Air brush department…" all the pics that were air brushed, but none on file or hacked by our Mr. Mckinnon, over a two year period.

Besides if he really released anything military important he wouldn't be doing interviews, he'd be under arrest or hiding in the embassy in the room next to Assange.