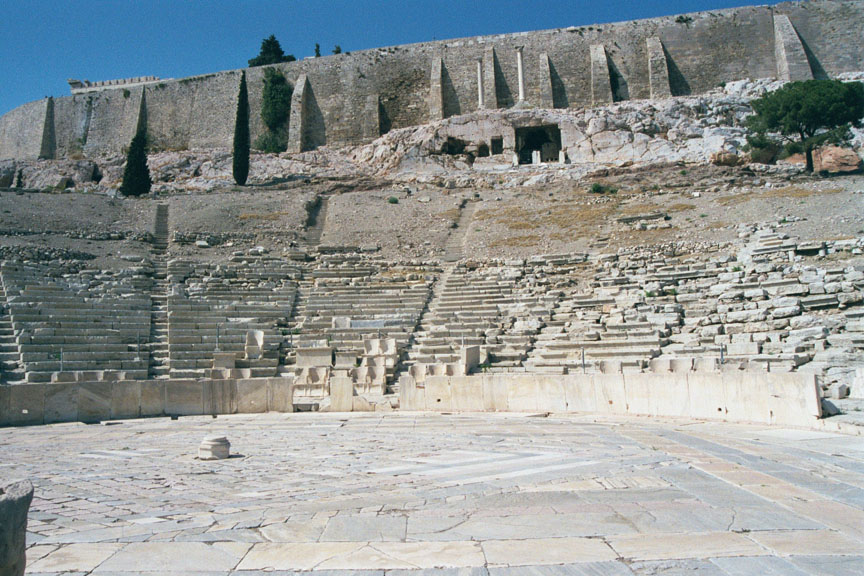 The last few days I've been researching the Greek theaters. It has been quite a hard thing to do, trying to sort through the massive amount of information that is given. The hardest part was trying to find the original sources of the facts and statements made. I searched what seemed like hundreds and hundreds of websites, all offered up the same information, almost verbatim, to the one before it. Two days of digging and retracing the steps of people before me, of checking sources and citations that were given at the bottom of each page or article I read. And finding that a lot of it is embellished or the writer has taken creative liberties with the factual data in order to make their article sound more appealing. Very frustrating... and confusing!

There are some sources that I tried to get a hold of.. but you have to be a part of a college or affiliated with a research group in order to achieve access to their archives. So, it took me a lot longer to find the original texts that most of the information was derived from. I often wonder why these things are not more easily accessible to the average person. Or maybe I just don't know where to look.


One confusing fact is when the Dionysus was built. Here we have three different statements from three different websites. I do know that it was rebuilt after the invasion of Greece. But all three of these statements sound as though they are referring to when it was originally built...

The original outdoor theater or theatron Dionysus was built in Athens, Greece in the late 5th century (first day of 500 BCE to the last day of 401 BCE). Before that most performers would perform at the Agora (A central square or space in ancient Greece cities)

The cult of Dionysus arrived in Athens in 6th (first day of 600 BCE to the last day of 501 BCE) century BC and the theater was built as part of the temple precinct.


I dunno where the 4th century comes into play.. maybe that's when they rebuilt the theater after the invasion...????

So, with these statements, one is really unsure of when the theater was built. I would assume it is the 5th century, but I would prefer to have definitive proof ..

The masks were organic and made out of hardened linen, cork, or wood material. We base this fact off of art on vases and a few blurbs of writing describing the masks that where worn....but not what they were made out of. There are no surviving masks from the theaters to know for sure. This is an assumption? But it is stated as fact at several websites. There is no way to know without a doubt what these masks were made out of according to some websites visited. According to others they were without a doubt made of hardened linen, cork, or leather.

The only fact that I have been able to verify is that they wore masks in theaters. There is one piece of writing that I have not been able to find the English translation for as of yet... Onomasticon by Pollux which describes 33 masks of the theater in detail.... depending on which website you visit, the number varies. But what I have gleaned from the sites I've read is that he is describing the characters or emotions that the masks represent, not the materials they were made out of.

Another source of information describing the masks is Poetics by Aristotle. In the 5th chapter, 1st paragraph as well as the 6th chapter, last sentence. There is one more source that I have not been able to track down. Only a couple of websites mention it...they say there is a detailed description of the masks within a writing, but never list the source of that statement. 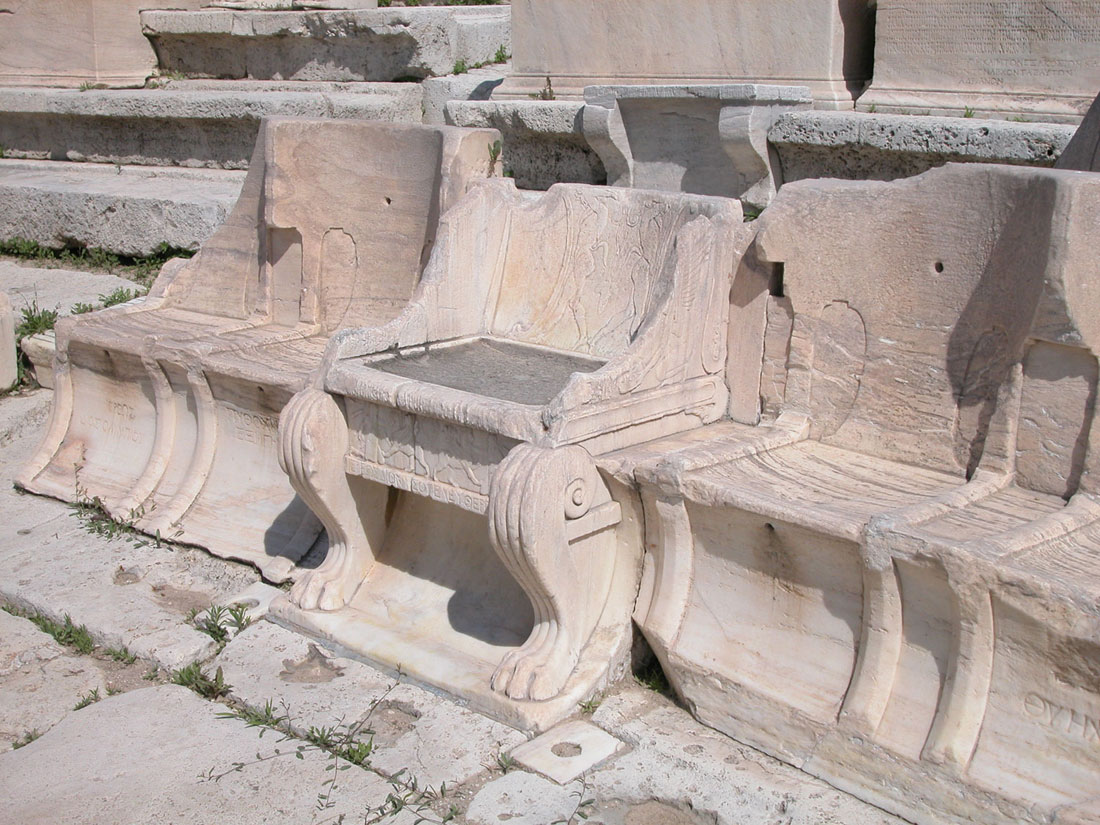 The theaters acoustical design incorporated niches into the seats and bronze vases were placed there in order to enhance the sound... this was written about by Vitruvius in his works : The ten books on architecture.. chapter 8, Acoustics, pg. 153. With how it is written, it seems as though he is suggesting that these pots be used, not that they are being used.

On a few websites I looked at they say that there are no pots found, but there are niches built into the seats of the theaters. And they also state it as fact that these pots were used. So, I am unsure as to whether they were used or not...

As for the other acoustical properties, some websites talk about the slope of the theater, the marble used on its steps, the limestone used in the seating, the masks, the stage being set very low to the ground, the cone shape of the theater itself, the bronze pots...maybe it is all of these? But yet the masks were said to not be of significance with regards to the sound, as the mouths were too small to help with amplifying the voice. They are also said to amplify the voice of the actor, so it would carry to the upper seats.

Some state a lot of mathematical work went into the design, some say that it was done by accident, as in building the theater by cutting it out of a hill was cheaper than building the amphitheaters like in Rome. It would be weird of them to make a theater of wood when they were moving so much stone, so, it doesn't make sense to me that they wouldn't use the natural resource of stone to make the theater in the first place..it was there, it would be easier then moving it all and cheaper than using wood. (plus there is mention of how they carved the seats and theater right out of the hill)

But it is also said that the original theater was made with wood seats, carved out of the mountain, and before it was made, people would sit on the bare hillside and watch performers on a makeshift traveling stage..

All in all, this has been a frustrating journey for me. I thought I was going to spend a few hours researching the Greek theaters. It turned out to be a few days. And still I have more questions than answers. ...


Where do I find the accurate information and if all of these statements are accurate ... *throws hands up in air dramatically and walks off*

posted on Apr, 8 2016 @ 04:59 AM
link
a reply to: blend57
A topic like this deserves to be in the History forum on the front page. It's a pity to have it hidden away in Rant.
The problems you are having with websites confirms my belief that working with real books remains the better option.

I would have thought that the Fifth century was the likeliest period for the solid structure, this being the great era of architecture as well as drama. In the more primitive age of drama, the structures would have been more primitive.

I suggest that the sites may be suffering a little language confusion.They may be getting confused between "theatre" in the metaphorical sense, meaning the whole world of drama, and the physical building itself. So the original sources or the reference books being used as sources might be talking about theatre in the first sense as arising in the sixth century, and the websites could be taking this as a reference to some physical theatre.

As for "built in the fourth century"; I wonder if there is some confusion here about numbering centuries. For example, the Victorian era, in the 1800's, was part of the nineteenth century, but I frequently see it described as "the eighteenth century" because of that "18". Similarly, these people may be looking at dates beginning with "4", and thinking "Ah, that's the fourth century".

The problems you are having with websites confirms my belief that working with real books remains the better option.


It’s really the only way for a subject like this.

OP, if you are really serious, you need to study this subject at university level.

In the meantime, real The Mask of Apollo[/i] by Mary Renault.