Tom DeLonge Will be on ATS to Answer Your Sekret Machines Questions: April 11, 2016

While many may know of Mr. DeLonge as the lead vocals and guitar of blink182, Springer and I have had the pleasure of a long conversation about his passion for uncovering the truth behind the UFO phenomenon. Over the past couple of years, he’s packed more research and interviews with connected people than many UFO experts do in a lifetime. His goal is to bring about disclosure, and not rest until it happens.

Tom’s first shot-across-the-bow at the powers that be is his blockbuster book, Sekret Machines: Chasing Shadows. Based in large part on the research Tom has completed over the past few years, it’s a fast-paced novel based on actual events, written in collaboration with New York Times best selling author and distinguished academic, A. J. Hartley.

So get your questions ready. This one will be epic. 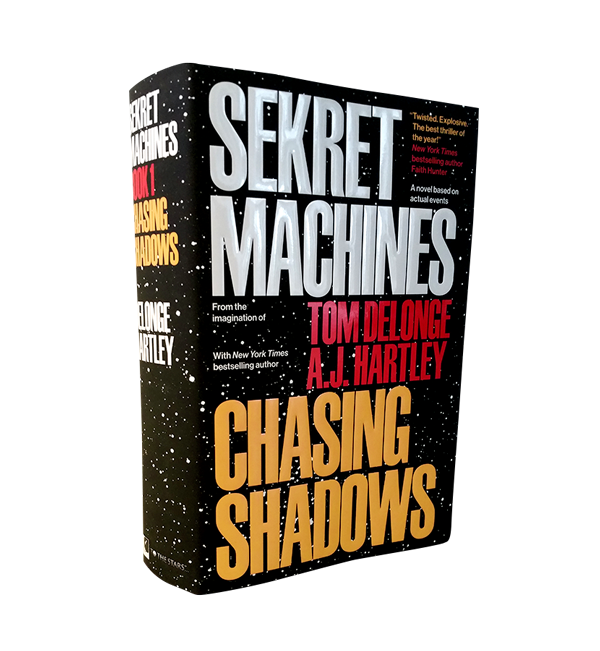 Praised as "an exhilarating thrill ride" that may never have you looking at the night sky the same way again, Chasing Shadows is the first book in the multimedia Sekret Machines franchise that will reveal fascinating secrets surrounding the true, well-documented events of Unidentified Aerial Phenomenon. Written by award-winning creator Tom DeLonge and NYTimes bestselling academic AJ Hartley in a powerful collaboration with top government advisors that keep the truth on course in this historical thriller. 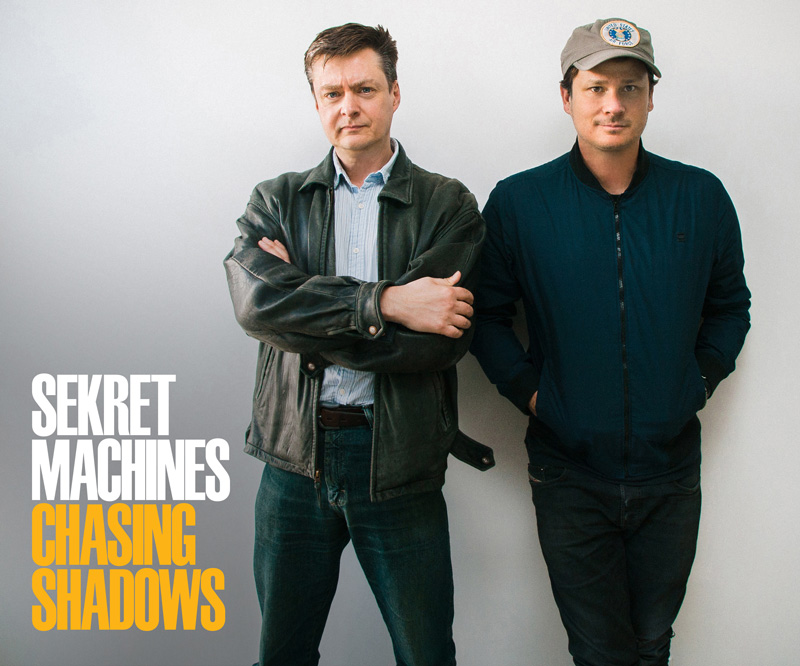 Tom DeLonge is an award-winning creator, platinum recording artist and entrepreneur from San Diego, CA. He is best known as the lead-vocalist and guitarist for the musical acts blink182 and Angels & Airwaves. After selling 25 million records, touring the world and helping various branded-product companies catapult to success with his influence and exposure, DeLonge exercised his acquired business acumen and spent 15 years developing various international lifestyle brands including Atticus Clothing and Macbeth Footwear. In 2005 he was the driving force behind building innovative and proprietary technology to help artists such as Pearl Jam monetize their content online.

A true artist at heart, Delonge continued to write music and expand his creative endeavors to a type of storytelling that transcended music and music videos to include film, publishing and comics. His first independent movie LOVE received critical acclaim from industry influencers such as Variety, won multiple awards on the festival circuit and was shown in over 600 theatres across the US in a one night live event. The full-length feature was accompanied by an original album and graphic novel for fans to fully immerse in an audio-visual ezperience.

In 2014 DeLonge created To The Stars, inc., a fully independent production house that would develop, manufacture and directly distribute transmedia franchises. The first, Poet Anderson: the Dream Walker went on to win best animation at the Toronto Shorts Festival and was immediately followed by a critically acclaimed comic book series and full length album by Angels & Airwaves The Dream Walker that topped the Billboard Hot 100. Within a year DeLonge released a 368 page follow-up novel, Poet Anderson…Of Nightmares, co-written by himself and NYTimes bestselling author Suzanne Young that rose to #1 on the Amazon Young Adult list and received 5 out 5 stars in Foreword Reviews being hailed as “an epic and sizzling tale of a teen hero struggling to find his destiny.” The novel release Of Nightmares that also included a music companion piece for readers to listen to while they read.

Now To The Stars, inc. continues to be a fully independent direct-to-consumer production house that focuses on storytelling based on science and fiction. Poet Anderson was originally inspired by a sleep study done at Stanford University. His current franchise Sekret Machines Book 1: Chasing Shadows is a technological thriller based on true events revolving around Unidentified Aerial Phenomenon and was guided by a team of top political and military advisors that keep the essential facts and the science behind the events accurate. DeLonge’s co-author, AJ Hartley is a distinguished academic and a NYT bestselling author. Like his franchises before, Sekret Machines includes original music by Angels & Airwaves with common themes discussed in the book and a docu-series is in development that will bring to life the non-fiction series that will be released.

Sekret Machines: Chasing Shadows
edit on 7-4-2016 by SkepticOverlord because: (no reason given)

Thank you for lining this up!

Well this is unexpected and nice. Looking forward to it.👍


edit: For those of you who missed this interview, I highly recommend you go listen to it NOW. It is one of the most profound interviews regarding UFOs that I've heard in years.
edit on 4/7/2016 by supermarket2012 because: (no reason given)

I like blink 182, I think this will be interesting. Gonna have to take off my pants and jacket for this one!

Book 1: Chasing Shadows is a technological thriller based on true events revolving around Unidentified Aerial Phenomenon...

"UAP" is about to go mainstream, huh?

Alright. Standing by for a standby.

originally posted by: daaskapital
Well...this is not what i was expecting...

Yes not expexted.. I recall a bit contraversial upcoming guest.
So I was expecting Bob Lazar.

Good lord! You got the lead singer of Blink 182 to do an AMA because he's an avid UFO researcher with many accomplishments under his belt?

posted on Apr, 7 2016 @ 09:12 PM
link
Damn...I just spend over 4+ hours searching THOUSANDS of old Geocities websites that are now cached (since Geocities is no more).

Sadly, at some point I changed the site to something else and it is no more.

I had lyrics, MIDI files, pictures ... it was the website that I taught myself to code HTML on.

I now, officially seen enough mid to late 90's websites to last me a lifetime. Holy hell how far the internet has come.

You sir go over the top for us ATSers!

You and Springer put in the work behind the scenes to bring us the gold, and I for one thank you both sir!

Wow how exciting....thank you! What time will the
AMA start?

As an ATS exclusive, we’ve arranged for a free download of the first four chapters. Just click here: Sekret Machines: Chasing Shadows PDF So get your questions ready. This one will be epic.

Damn SO..... this just keeps getting better n better!

While many may know of Mr. DeLonge as the lead vocals and guitar of blink182, Springer and I have had the pleasure of a long conversation about his passion for uncovering the truth behind the UFO phenomenon. Over the past couple of years, he’s packed more research and interviews with connected people than many UFO experts do in a lifetime. His goal is to bring about disclosure, and no

Sorry SO, that paragraph was enough for me. Almost like a wind up before a pitch.

As an old G punk rocker (for lack of a better term) ...id rather discuss music. :/

If I can ask one question in this AMA, it's to you. What makes Mr. DeLonge stand out as an authority in the UFO phenomenon, that we should be asking him questions instead of the other way around?

I mean that genuinely..or are we just pitching books?

posted on Apr, 7 2016 @ 09:43 PM
link
Awesome. This seems like it will be interesting. Remember a few songs from Blink 182 back in the day..why does that make me feel old. Hopefully my laptop will be able to run it decently. This is when I wish I had access to my main dev computer and not an aging laptop that has issues with youtube and facebook games -_-. Either way I will be following this.

By far the best and most prepared individual...ready and willing to share his thoughts. I want more!

posted on Apr, 7 2016 @ 09:49 PM
link
a reply to: SkepticOverlord
Thanks for all your hard work getting people on here for these interesting AMAs. Good job!

posted on Apr, 7 2016 @ 10:12 PM
link
I'm Enthused to hear you guys pulled some Strings to get Mr. DeLonge to discuss that Alien's Exist. I feel like I'm on a Carousel where I will discover A New Hope for the discussion of aliens and UFOs. Just remember All The Small Things add up if this is your First Date with the topic.

You'll be Feeling This amazing sensation on the Roller Coaster called Life, as you delve Down into the intricacies of the topic at hand. I'm Sorry to those who don't get this Anthem. But Sometimes if you stay Up All Night researching Alien's and UFOs, you may become fatigued.