originally posted by: UnBreakable
a reply to: InhaleExhale

Yet you keep coming back to this ludicrous thread.

Ludicrous thread? And you thought I had comprehension issues

I said the idea that Planet 9, Nibiru or whatever planet people want to believe will collide with us in 3 weeks is ludicrous.

Its a good thread pointing out how respected news agencies post things in a way that might allow the "crack pots" as stated in the article to use this as some sort of confirmation.

However your OP was lacking, nothing to go off, just posting a few quotes and a link to the article, that was my only issue with the thread or how you composed it.

The same stuff was posted on NineMSN here in Australia a few weeks back, it seems to be making to rounds all over world via various so called respected news agencies.

I guess its just to get clicks and view to their news sites, Like you said a slow news day, what better way to get clicks than by posting an article with wild headline.

Sorry to dampen your party, I will leave so you can have a blast

originally posted by: MrConspiracy
Originally published by : The Sun. If you're familiar with The Sun, you don't need to be worried.

HOWEVER, as someone already pointed out, the whole idea of Planet X has been talked about a lot more recently. And I see things like this that, although it's from a dodgy source, make me wonder... would we know? would we see it coming?

I can't for the life of me find the details but didn't a huge meteorite fall to earth in the last few months that nobody saw coming? Why are we so sure we can see everything that's coming?

But yes, in regards to this article. Take it for what it is.


Not just reported by the Sun. They may have enhanced the story in a doomgloom way but two concise links below..

The Swiss scientists are experts in modelling the evolution of planets. They usually study the formation of young exoplanets in disks around other stars light years away and the possible direct imaging of these objects with future instruments such as the James Webb Space Telescope. They estimate that the object has a present-day radius equal to 3.7 Earth radii and a temperature of minus 226 degrees Celsius.

The six most distant known objects in the solar system shown below with orbits exclusively beyond Neptune (magenta) all mysteriously line up in a single direction. Also, when viewed in three dimensions, they tilt nearly identically away from the plane of the solar system. Batygin and Brown show that a planet with 10 times the mass of the earth in a distant eccentric orbit anti-aligned with the other six objects (orange) is required to maintain this configuration [Diagram created using WorldWide Telescope]. 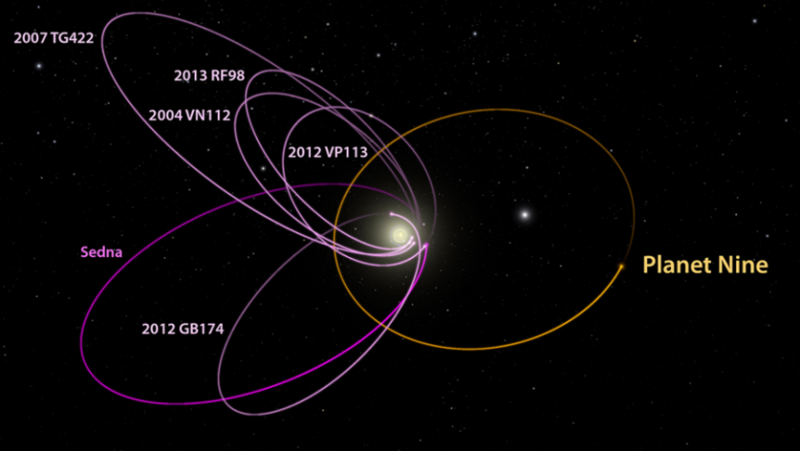 Astrophysicists at the University of Bern have modelled the evolution of the putative planet in the outer solar system. They estimate that the object has a present-day radius equal to 3.7 Earth radii and a temperature of minus 226 degrees Celsius.

posted on Apr, 7 2016 @ 12:33 PM
link
The "planet" which many in the scientific community believes does exist doesn't have to hit us or even come close.

All it has to do is affect the gravitational orbits of other bodies that realistically could hit us - read: comets or meteors - in order for it to pose a very real danger to Earth. It is already supposedly affecting Cassini's orbit according to some scientists.

I'm not saying any of this is true, but if a large planetary body of some sort with a long eccentric orbit does exist, it can affect us negatively in a myriad of ways.

We need to keep our minds open. Along with any/all detecting equipment that can help us to know.

posted on Apr, 7 2016 @ 01:32 PM
link
It's the heading as per the NYP that makes the deception.
The story itself is pretty clear though, if the scientists estimations are correct, it might disrupt comets and asteroids, but the planet itself would not be in a collision with Earth.
edit on 7-4-2016 by smurfy because: Text.

Quotes out of context are misleading. The suggestion is that the planets passage through the solar system will cause asteroid activity in our vicinity, resulting in collisions between those asteroids and our planet, not this Planet Nine slamming into our own planet!

Again, read from the article in context! Good grief!

posted on Apr, 7 2016 @ 05:21 PM
link
I think there might be something as so much hassle with the Niburu etc, but at least Rainbowphoenix and Alex Collier claim that something stopped Niburu aproaching, so nothing serious is going to happen. Let's hope so. ETs have intervened recently quite often to prevent calamities say many psychics and channeled ETs. May be they know something.

Now it's your turn to get your story straight. The collision is when debris from the object's million mile tail fall, smash, collide, with Earth.

Its presence in our solar system, its solar sytem as well, has caused several planets to heat from the core, magnetic poles to shift, wobbling, increase in number and intensity of earthquakes, volcanic eruptions, ocean swells. and increase in sun storms, solar flares, and solar filiments ejections.

This is the "story".

Your believing this or not makes zero difference.

originally posted by: UnBreakable
Hey Skippy, if you had any comprehension skills you'd see from my statements that my bs meter is at 100%. The reason I put it here was because I was surprised to see it in the NY Post, as opposed to BIN or the Examiner. .

...and if you read to the bottom of the article, it says it was originally posted by The Sun (a tabloid.)
edit on 7-4-2016 by Byrd because: (no reason given)


originally posted by: UnBreakable
Hey Skippy, if you had any comprehension skills you'd see from my statements that my bs meter is at 100%. The reason I put it here was because I was surprised to see it in the NY Post, as opposed to BIN or the Examiner. .

...and if you read to the bottom of the article, it says it was originally posted by The Sun (a tabloid.)

But the tabloids don't always get it wrong. They will sensationalize to sell papers, but sometimes.....sometimes....there is truth in there.

There are other sources....reputable sources on the subject. Let's open our eyes and deny ignorance.

posted on Apr, 7 2016 @ 06:39 PM
link
Maybe this recent sighting from the ISS helps? If you look closely at the last two stills at the end of the video it appears like the light from the sun overhead is reflecting on a spherical (planet like) object. Interestingly the ISS viewing channel is now offline..

If it was close enough to be seen from the ISS it would already have affected the outer planets and asteroid belt and we'd know it was there.

The planet they're talking about is beyond the orbit of Pluto and doesn't come anywhere near us.


originally posted by: crappiekat
Unless I am reading this totally wrong.

I think this is what they are referring too.


Ok, thanks. I was searching for everything else but Planet Nine before I posted this. Mods can shut this one down then.

Is Planet 9 from Outer Space?


originally posted by: crappiekat
Unless I am reading this totally wrong.

I think this is what they are referring too.


Ok, thanks. I was searching for everything else but Planet Nine before I posted this. Mods can shut this one down then.

Is Planet 9 from Outer Space?

The best of the worse movies ever made.

Pluto will always be the ninth planet.

X in Roman numerals is 10. Planet X is Planet 10 Zachariah Sitchen even though so when he wrote his books. He also called it Nibru(sp?) not just Planet X. He gave it the X not because it was unknown but because it was the 10th planet. Using X was so sheik at that time. Even today using Latin or Greek numbers or words is considered a sign of intelligence. But really it is more like ignorance.

There have been 3 planets called Planet X before they got their official designation.

The X does not equal 10 in the same way as Roman numerals do.

And don't get me started with Sitchin. The guy was a fraud.
edit on 742016 by TerryDon79 because: (no reason given)

yeah I know but Sitchen was quite adamant that Nibriu was the 10th planet in our solar system.

He was also quite adamant we were going to get destroyed by it.

And Uranus, Neptune, and Pluto were all Planet X before they were named. Not one of those were the 10th planet. X is for unknown, not 10.

Sitchin could call it Bob for all I care. He's a fraud that had no idea what he was talking about.
edit on 4/7/2016 by Zaphod58 because: (no reason given)