posted on Apr, 7 2016 @ 04:57 AM
link
The bigger is a telescope, the more details it can see of a distant target. This is why astronomical telescopes all over the world are racing to get bigger and bigger. In fact, a recent device combined the imaging power of a satellite with hardware on Earth so to create a telescope the size of, virtually, 8 Earths - enabling us to see for the first time in History the birth of planets around a distant star, something which was impossible to achieve with our smaller telescopes.

But this feat inspired me. It gave me an idea - using Time in addition of Space so to push things to the next level. What if we could create a telescope whose size is not measured in Earth width... but in planetary orbit units?

And so I'd like to set down my idea for the theory behind the construction of a telescope roughly 100,000,000 miles wide (or more) - Timelapse Telescopes.

Now traditional telescopes are big, concave mirrors which magnify the image of the target by focusing its light rays into a single point, like so: 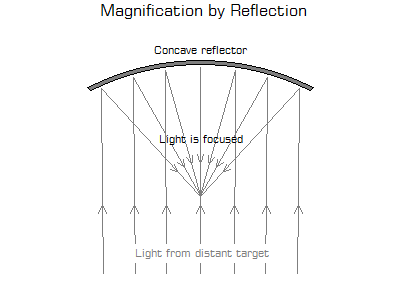 In telescopes, a secondary mirror then sends the focused light out at the stargazer (since the stargazer doesn't, you know, live inside the telescope): 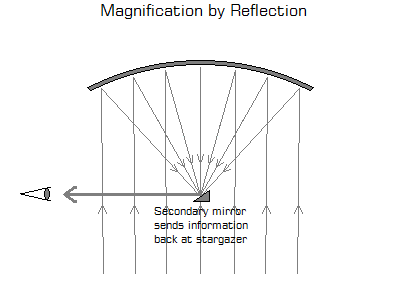 The larger the mirror, the more light rays it can gather from the target, and the clearer the magnified picture of the target will be. This is why your 1-meter telescope always beats your 75mm when it comes to getting a clear picture of anything from the M45 nebula to the Pinwheel galaxy. This is why gathering light for a width worth several Earths gives us the ability to beat even the meter-sized telescopes and start seeing clear details of a solar system being born. Imagine what details we could see of the cosmos if we had a telescope capable of gathering light across astronomical units instead. The resolution would beat anything we've ever seen by several orders of magnitude.

Such a large telescope is theoretically possible, and the mirror needed wouldn't even have to be that large spatially - instead, Time would fill in where space can't.

Crank it up a notch

My first thought (and a good way to present the core of my idea) was to use the Earth as a carrier for the mirror. My thought experiment pictures a mirror on Earth. As the Earth rotates around the Sun, on her near-circular orbit, the mirror describes in space and time a concave trajectory. 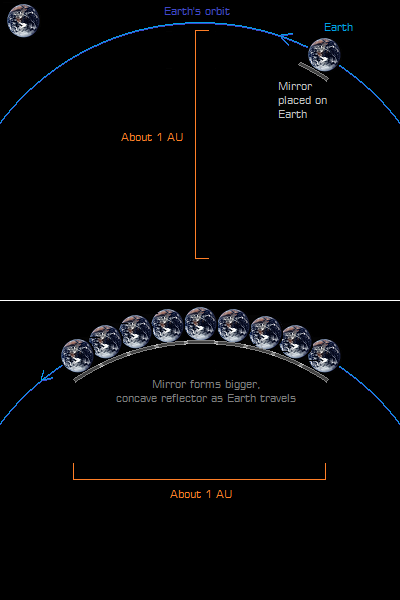 Any light rays of a target would be reflected by the mirror. Though the mirror is small (in the sense that it's not Astronomical Units wide), the mirror nevertheless travels across distances of astronomical units, and keeps on reflecting light rays into a point during all that time. Effectively turning the little mirror... into a magnifying, AU-wide reflection telescope. 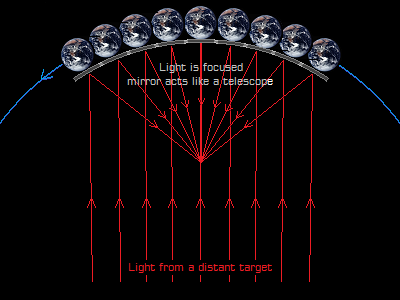 Then all that is needed is a timelapse camera placed at the point of focus so to harvest the magnified image (it has to be set at combining the reflected images of all time frames together in a cumulative fashion, which basically means very low shutter speed), and send the information back at us astronomers: 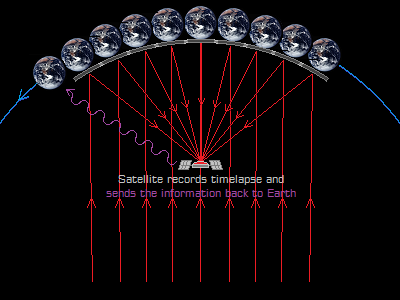 And there you go - you have a Timelapse Telescope.

Now, using a planet is not the optimal idea - a telescope using a circular orbit gives image of high resolution on only one axis: width. One typically needs 2-D imaging (width + height), but circular orbits cannot give resolution across the height axis. 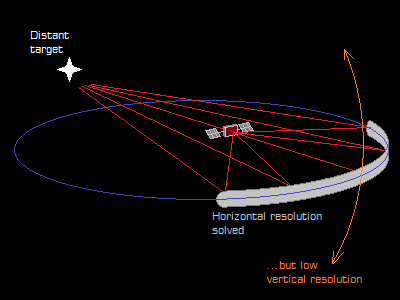 To solve this issue, one simply needs to consider placing multiple artificial satellites, each carrying their own mirror, on orbits which have the same diameters but have different orbit plane angles. That way all orbits would form the section of a sphere, and all mirrors would form a parabolic shape in timelapse - covering horizontal resolution individually and vertical resolution collectively: 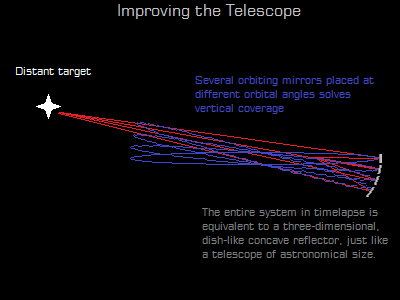 Of course, a simpler alternative would be to change the orbital plane angle of a single mirror-carrying satellite each time it completes one orbit; but to achieve a decent vertical resolution using that method would take much more time (several decades if the satellite is at 1AU from the Sun) than if you'd use multiple satellites with dedicated mirrors.

This concludes the presentation of my idea. Just putting it out there!

That is a fanstastic idea!

How far from the planet would the receiver have to be, in order to receive the reflected light, and how would the system account for interference from our home star?

posted on Apr, 7 2016 @ 05:29 AM
link
That's a synthetic aperture telescope. Sort of. It presents a lot of engineering issues but you might be able to do it, at least in theory.

We do that with radar all the time. It gets harder the smaller the wavelength you use.

This is the main issue of the concept - a large enough mirror. On the bright side, though, the mirror can be orders of magnitude smaller than the telescope it composes.

In theory the mirror can be placed on a satellite and made smaller than the Earth (that's the magic of timelapse, Time gives a hand where space cannot). But on the other side, in practice there is a proportional relation between the size of the mirror and the distance to the timelapse camera. So if you're going to use a smaller mirror, either make sure you've got a really good receiving camera, or that the orbit of the mirror is smaller and closer to the camera.

I'd expect engineers to test small-scale Timelapse Telescopes (smaller than lunar distance) first, so to reduce the size of the mirror needed (and focus light directly on Earth as a bonus) and build up from there until they can make it into a fully-fledged AU-wide system.

How far from the planet would the receiver have to be, in order to receive the reflected light

and how would the system account for interference from our home star?


Two ways to choose from:

2) Or you can give the mirror satellite an eccentricity of 1 and place the receiver at the aphelion part of the orbit, far from the sun

Over here on the SKA Timeline thread is my post providing an explanation on how ground based radio telescopes are connected. ATS link - Project Timeline-SKA project "Square Kilometer Array"

The old way to combine ground telescopes was to timestamp everything, physically get the HDs together, then process the data. I think with modern networks they just mirror their data to one location and then process. And that is how they tied in the satellite with the ground stations! See, you may not need a satellite to bounce the signals back to--just enough computing power to deal with all the precession, leap seconds, time passing, amount of data gathered etc.

BTW, I think that (time based telescope) is how they discovered the first exoplanets. They targeted the star at one time of the year for a few days then waited six months and targeted it again. The perturbation in star was then calculated giving the hint there was "something large" in orbit.

Oooohhh! I got one for you! How about multiple satellites at all the Lagrange points? That would be 2 AUs + the sun's diameter!! Now that would be a telescope!

I am glad that you were so inspired!

Yup - for the record, it was this post of yours which inspired me: TEOTWAWKIAIFF rocks

As for the James Webb telescope, posting it at a L point doesn't make it a Timelapse Telescope. My theoretical device endeavours to describe a circular orbit across space, turning the small mirror into a huge physical reflector in space and time, reflecting light for all that time into a single point where a timelapse camera will harvest the information.

Nope, no one has built a Timelapse Telescope yet.

So a visual telescope... super cool idea!! Glad to light the spark!!

Then maybe a small fleet of mirrored satellites would also work? Kind of like a distributed bullseye formation above and below the plane. There has to be a way to keep costs down and be actually do-able.

I am going to ponder this off and on all weekend and see if any residual embers are still present!

Then maybe a small fleet of mirrored satellites would also work? Kind of like a distributed bullseye formation above and below the plane.

Yup, thought about the same thing!

A cluster of satellite is the solution I propose at the end of my OP to solve vertical resolution in less time.

Excellent idea! It's just a question of costs and logistics.