a reply to: ipsedixit
For anyone interested in the truth, here you go. These will answer all your arguments.
www.washingtonpost.com... rid_experimentrandom_1_na
i.imgur.com...
www.thepoliticalinsider.com...
www.gao.gov...
www.txdps.state.tx.us...
www.asanet.org...
www.washingtontimes.com...
i.imgur.com...
i.imgur.com...
i.imgur.com...
Trump organization employs more female executives than male. Note that Trump's spokesperson is FEMALE and also MIXED RACE:
dailycaller.com...
i.imgur.com...
She was violent FIRST.
www.dcclothesline.com...
Video of Trump protester attempting to attack Trump, VERY VIOLENT SUPPORTERS RIGHT?
streamable.com...
amp.twimg.com...
President Obama and the Clinton's have destroyed race relations by creating extreme animosity between blacks and white as well as the police
Iran Nuclear Deal already being violated by Iran, we got nothing out of it besides 5 hostages that they may not have released to us at all and we aren't doing anything to prevent them:
www.bbc.com...

Liberal Fascism is the only fascism that is going on now. The only thing that separates leftists of today from fascists of the early 20th century is the name. Liberal fascists act exactly like the brown shirts, attempting to shout down all opposition, (Chicago riots and protests at Trump rallies) Many don't even know why they're protesting, they're just protesting because the liberal media sees Trump as a threat to the new world order they and Soros want to create, the "open society" one nation communist totalitarianism.
insider.foxnews.com...

Why? Anger. The people are angry. It's the same source of anger that keeps Bernie in the hunt.

Difference is, Bernie is as much a career politician as Hillary. Trump is a career celebrity.

posted on Apr, 6 2016 @ 10:30 PM
link
People support Trump because they think he's an outsider and he's saying what lot's of American's want to hear. No PC, no Illegals, No Muslims...etc etc.

Except that Trump is a Billionaire insider who's close friends to Hillary Clinton and most of the Criminals in Wall Street that helped Crash our Economy about 8 years ago. Also my drunk Neighbor rails against Immigrants and not being PC and how he hates Muslims. I don't want my drunk neighbor to be the president. 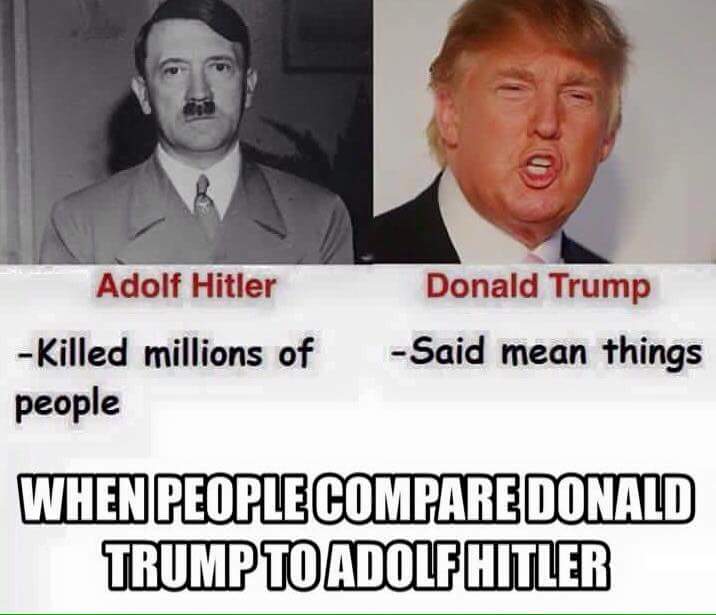 originally posted by: Tiamat384
a reply to: Tiamat384

As should be the same regarding Bernie Sanders and socialism, no?

Across the board - the comparisons to Hitler/Stalin are ridiculous to say the least.

I'm Canadian but wouldn't hesitate for a moment to come on down there and vote for trump! Any other candidate is just another face like any other that's going to perpetuate the same sluggish downhill direction both our countries are falling. Its like our we have cancer, it's a slow ugly death were facing together, look around!
So what Ya got to lose, vote TRUMP! Something has to change, either it will speed up the end or just......maybe......I know......but......he can always be thrown out......just......do you really truly think he could make things WORSE? Yes he blurts out a lot of crap, whatever. Lol. If he's paying his own way and not being told what to do, just maybe he might shake things up a bit, come on you know I'm right!!!!! Absolutely nothing to lose, it's either him or same same same, please not that.


We support, want and need Donald Trump because: www.abovetopsecret.com...

Because in the U.S.A. we have a demographic of people who either did not finish college or high school. They are stuck in perpetual #ty jobs. There are no Indrustial jobs left in America. EVERYTHING has gone to India, China, Vietnam, and even Mexico. I can't find pair of Jeans that were made in San Francisco....

The blue collar class is viewed by BOTH teams (red and blue) as the economic equivalent of cannon fodder. Every big government policy is a burden on the blue collar working class.

Tolerance of illegal immigration -- the illegals move into (formerly white) working-class neighborhoods. The uptick in crime falls disproportionally on the working class, as falling wages caused by illegals working below minimum wage.

The ACA -- Obamacare is only forced on people who don't have insurance, and work for a small company that doesn't have to provide any coverage. In other words, the working class again.

Gun control -- Wealthy people will always have access to guns, as they do in Australia and the UK. Every American attempt at gun control is taking away guns from poor people. States that have "concealed carry license" usually charge several hundred dollars per year; again, a disincentive for poor people. Most of the people who defend themselves with a gun are working class people. The rich live and work in guarded gated communities and schools, and so are not threatened as much by crime.


Listen to anyone put down the "idiot trump voters" and you are listening to someone from the upper 20% of US income earners poo-pooing on the people who change the oil in their cars and stock the shelves at walmart. It's like listening to the pettite-bourgieoisie on the eve of the french revolution --- a revolution of the working class


It's class war all right.


It's a class war plain and simple.

All these #ing fools right here on ATS will tell you how Trump IS this and he IS NOT that and yet not a single one of the arseholes actually know the man as they have not met him.

Because feelings, man.
edit on 7-4-2016 by lightedhype because: (no reason given)

Trump is the only candidate who has no obligations to a collectivist hive.

posted on Apr, 7 2016 @ 02:36 AM
link
People vote Trump because Republican propaganda has gone full extremist. To have a candidate unapologetically racist and sexist, and hateful, endorsing murder, and torture, violence and mass deportation is the tastiest f*cking Kool-Aid they've ever had. They don't care what he says wrong or how illegal or hateful his ideas are. The more wrong he is, the more they like it.
edit on 7-4-2016 by spiritualzombie because: (no reason given)

posted on Apr, 7 2016 @ 02:46 AM
link
I find it amusing how much trump gets away with. If it had been Obama doing half the things trump had done, we would never have heard the end of it. Trump and his devotees make so many excuses for trump it's embarrassing

Because the vast majority these days are not people but sheeple willing to believe whatever particular brand of bull crap is presented to them as long as it does not effect there daily lifes and capacity to consume.

Trump is very charismatic and people do love a showman that entertains, that is why people show support for the fool.
edit on 7-4-2016 by andy06shake because: (no reason given)


Why Do People Support Donald Trump?

simple. Because everything else is status quo...same old same old. By electing a genuine lunatic...some things are bound to change. At this point...many people dont even care if its for better or worse...just change something.

Look at ATS...I think majority of US residents that frequent this site...are not too crazy about their government. By voting Trump...you in fact are giving a middle finger to the established order of things. There is a certain sadistic pleasure in that.

Even though things are not likely to change much...even if Trump becomes president.

posted on Apr, 7 2016 @ 04:13 AM
link
Quite simply, because the candidates (all of them) are terrible. They're all just as bad as he is. And to put it bluntly, if you're even the slightest bit conservative, the idea of an out and proud socialist inhabiting the WH for 8 years is terrifying. I don't think most moderate conservatives and libertarians (especially) like Donald Trump at all. They just hate the other Republican candidates and are scared of 8 more years of radical leftism.

Lol. back this up. It's like $75 every five years in WA. The majority of states are "shall issue" and gun crime is tanking. ALL crime is tanking. We have more guns, more people that carry guns, and the murder rate keeps dropping.

Show me one state that charges hundreds of dollars per year for a concealed pistol license.

posted on Apr, 7 2016 @ 04:45 AM
link
As soon as I saw the title to this thread I knew the liberals would be out in force. I wasn't disappointed. Once again from the left all we hear is insults and rhetoric. And they think the right wing is unintelligent and misguided or uninformed. You people voted for obama...twice! And now you will most likely vote for hillary, despite her downright criminal actions.

You lefties honestly believe the right are the ones who have been hypnotized by propaganda? Really?

And, before you knee-jerk typists get started, yes - republicans have lied and failed in office too. Please try addressing the failures of the current administration without using past administrations to justify the current failure.

In response to the thread - people are absolutely fed up with career politicians and party automatons. Its not that Trump is a great candidate. Its that the politicians are just that bad.
edit on 7-4-2016 by Vroomfondel because: (no reason given)