Why do people support Donald Trump?

I have my own theory. I had an insight during the administration of George W. Bush, post 9/11, when I realized that the ideal person perps would want, to steer idiots wrong through a complicated situation, was another idiot.

It became clear to me that the oligarchy had finally succeeded in "dumbing down" the American population to the point where a majority of them would believe any cockamamy story, no matter how ludicrous, as long as it was explained to them by someone on their level.

It was a chilling moment. I realized that the "truth movement" was doomed by the downward shift of the middle of the statistical bell curve of the national I.Q.

The looting of the American economy by banks and the military industrial complex drove increasing numbers of people out of the work force completely or into very marginal jobs or term employment. More and more money migrated to the "oners", many of whom, shipped it offshore and out of the economy.

However, I didn't see what was coming next, although there was a hint of it during the Obama administration, when there was some attempt to form a "national youth organization" reminiscent of Germany's "Hitler Youth" or the "Young Pioneers" of the Soviet Union.

The advent of Donald Trump clarified things for me. He put the spotlight on the fact that just as Germany, in the economically desperate 1920s, had reached a critical mass of people ready to rally around a dictatorial crackpot, America's population of the desperate and dumbed down, heading into the 2016 presidential election, has reached the critical mass required to make a gaudy, egomaniacal casino owner into a serious and very demagogic contender for president.

Webster Tarpley, of World Crisis Radio and tarpley.net, draws the parallels with fascism on the rise much more lucidly and in more detail than I do in an article at the following link.

Fascism – The Organized Violence and Terrorism of the 1% Against the People; Carried Out by Demagogues and Goons in the Service of Wall Street; To Understand Trump, Study the Mussolini Of 1921-22 and the Hitler of 1923 – Not Fascism in Power, but Fascism Struggling to Seize Power

And a cherry on the cake is that when this is pointed out to us, we are told that comparisons to Hitler are stupid, and tiring . Yep ipse,, you pretty much summed it up.

posted on Apr, 6 2016 @ 07:27 PM
link
I don't really 'support' anyone....Im just waiting for the sh!t show that is going to follow if he does become president..so, Im kinda hoping he makes it..just ready for something..even if that something is him.. It's all a joke anyhow..so really what does it matter..?? In the end they are all clowns, liars, thieves, and fools..

posted on Apr, 6 2016 @ 07:27 PM
link
Because the presidential election is a popularity contest voted on by a completely uninformed public.

Otherwise we would not have had bush 2.0 or obama.

I agree..that's why campaign advertising is SO important. The more people hear the name or see the face..that's who they will vote for..for them while in that little booth..it comes down to how many times they have seen a particular persons face...neg/pos..the more exposure, the more likely they win.

Bernie is a socialist.

It is clear that the institutional policies of make the American public fat, stupid, and lazy have been successful with large amounts of the population.

They have created a nation of people who will vote for a corrupt scumbag like Shillary Clinton because the alternative being served up is this pseudo-celebrity Trump and vice versa.

Fortunately for us a fair amount of people are paying attention and have funded Sanders to stop 4 more years of the heinous Clinton family.

I am still laughing about people thinking there is a difference between Shillary and Trump and their love of the CFR.

Because some people just wanna watch the world burn.

introvert
+6 more
posted on Apr, 6 2016 @ 07:45 PM
link
I don't think Trump is Hitler and I do think the people that support him, for the most part, have the best of intentions at heart. They want a change. They know that something is wrong. Something is wrong.

But our fellow member, Blazemore, was close to the mark. It's not that they are unintelligent though. They are misinformed. Many of the people that support someone like Trump has been exposed to years of Right Wing propaganda and are trained to be ignorant of what really weakens this country.

Abortion, gays, Liberals and illegal immigrants are not a threat to this country. They do not weaken this country.

At what point do they put their ego aside and see what the hell is really going on here?

In my book casinos + construction industry = organized crime. There is no way around this. People who think that Trump is a stand alone guy just don't know the facts of life.

I don't think you can reason with his demographic. I have to go way out of my own box to try to think like them. What would be a good anti-Trump slogan,

Jesus Would Not Vote For A Casino Owner ?
edit on 6-4-2016 by ipsedixit because: (no reason given) 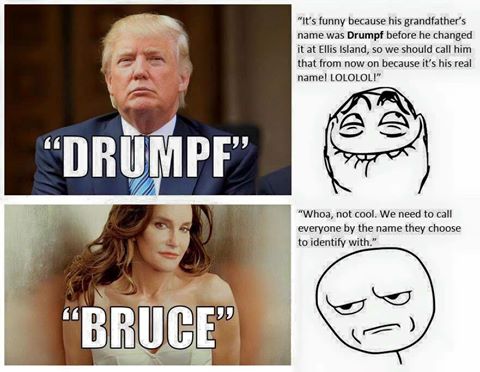 posted on Apr, 6 2016 @ 08:04 PM
link
I don't like Trump by any stretch of the imagination, I believe he's a dope, but we really have limited choices this upcoming election.. I don't trust Hilary one bit, and I think 4 years of her would be 4 years of the ultimate puppet in the office... I think Sanders plan is too ambitious and will never get through Congress. I'm okay with gradual change, but he wants to take on Wall Street and go after them hard, so I believe 4 years of him would be a stalemate. And personally speaking, Bernie would be the worst for my own personal interests. I really don't know who I'll vote for. This election has that feeling where I won't know until I'm at the voting booth and push come to shove.

he looks good next to our politicians.

also people who think we are right wingers motivate us. They are idiots stuck in their parents left VS right nonsense.

plus idiots act a fool towards him. that last one could do it by itself. American idiots who curse the MSM one moment and tune in the next. I usually oppose their retarded ideas, lies and social programming

They hate, I grow more resolve.