Is Planet Nine Tugging on Cassini?

there were two unseen planets. Uranus and Neptune.

If this planet does exist I wonder if the weather will be anything like it is on Uranus.

Colder.
Even though it's cold on Uranus, it would be much colder out there.

Unfortunately,it can't.Hubble can only focus on very far objects.

Cant wrap my tiny head around it.

The argument (as I recall) made at the time in favor of re-designating Pluto as a dwarf planet was that, if you let the definition as-is, there were already a handful of other planets (Eris, Makemake, Sedna, etc.) and, in all likelihood, there are many others left to be discovered as we explore the outer solar system in more detail. It was basically a choice between a solar system with 8 (at the time) planets or (eventually) dozens of planets.

I'm not saying it was a great choice, but there was a certain logic to it, at the time

originally posted by: MarioOnTheFly
it's utterly amazing to me...that the Sun could gravitationaly influence a body that far out..the OP states..15x further Pluto.

Cant wrap my tiny head around it.

I'm with you buddy.

originally posted by: Ericthedoubter
a reply to: 123143

Unfortunately,it can't.Hubble can only focus on very far objects.


Given the fact that even the Moon is hundreds of thousands of kilometers away from us (and from the Hubble), focusing on something far or near doesn't even come into play here. The Hubble is focused perfectly on it all.

The Hubble took pictures of the Moon, by the way.
edit on 6-4-2016 by wildespace because: (no reason given)

So do you.You affect the Sun as well.

Really ? Thats news to me. I red many threads that state that Hubble cant take pictures of apollo sites...and honestly...it sounded reasonable.

Every single object that has mass exerts a gravitational pull, from every speck of dust in the cosmos, right the way up to massive objects like gas giants, stars and black holes and what not.

Everything which posesses mass, exerts gravity, bends space time around itself, relative to its amount of mass. So, not only does your gravitational pull effect our planet as its effects you, but our own personal mass effects the Sun, just as does our planets mass, and the mass of every other planet or body containing mass in the solar system. The effect that one individual human being has on the sun, from the perspective of gravitational pull is negligible in terms of its measurability, but it happens none the less.
edit on 6-4-2016 by TrueBrit because: Grammatical error removed

Well thank you for the explanation. Though im not sure i completelly agree on this.

Can you empirically detect or measure this influence between me and the Sun ? Math is not proof.

Also...mass is theorized as being behind this attraction, yet there is an example in the solar system...where mass is lower then on another body...yet the gravity is higher.

Well thank you for the explanation. Though im not sure i completelly agree on this.

Can you empirically detect or measure this influence between me and the Sun ? Math is not proof.

Also...mass is theorized as being behind this attraction, yet there is an example in the solar system...where mass is lower then on another body...yet the gravity is higher.

Which planet are you referring to when you suggest that there is a body with little mass, and great gravity? I would suggest that perhaps you are confusing mass for volume. Neutron stars are crazy objects, because they pack mass that one would associate with objects the size of stars, into an area just a few miles across. Low volume, high mass, gigantic gravitational effects.

As for mathematics being no proof...Well, E=mc2, and that was known before the invention of the atom bomb. It is also a theory without which that bomb could never have been built.

Its a solar system body...i cant look it up right now...im on the phone. Bare with me...i'll provide the example as soon as i get to my computer. Meanwhile...if you want you can look it up yourself. Check out the mass and gravity of solar system planets...you will notice this anomaly im speaking about.

I went hunting and could not see any anomaly.

Hubble is great for taking pictures of stars and galaxies that are far away, and it is also capable of taking pictures of larger objects that are much closer to Earth, such as our moon and Jupiter However, Hubble is a poor platform for imaging small objects (such as Pluto) in the far reaches of the outer solar system. There's a good explanation for why that is here.

Hubble is also a poor platform for what needs to be done with respect to a potential ninth planet at the moment, which is actually find the darn thing. Hubble can take detailed pictures of the moon, Jupiter, and other stars and galaxies because we know where those objects are, can point Hubble at them. If need be, Hubble can track those objects because we know how fast and in what direction they appear to move across the sky in relation to both the Hubble and Earth.

What is actually needed is a relatively wide field telescope to image the area where this new ninth planet is suspected to be over a long period of time, then to compare the images and see what (if anything) appears to move in the manner that a planet orbiting our sun would. That's not Hubble's job. Telescopes like those at the Mauna Kea Observatory and Cerro Tololo in Chile are better tools for the job.

slight disclaimer...I could be misunderstanding the numbers so dont rip my head open...but here it is:

one example of what I'm talking about, compare mass and gravity of Uranus against numbers for Venus.

Both of these examples have almost identical gravity...yet they differ vastly in mass.

Again...I maybe misreading this...and maybe this link is not correct in statistical numbers.

remember the scope of just our little solar system, and the size it is 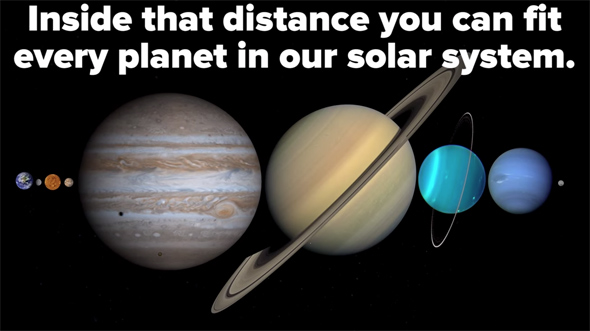 They have differing mass but their gravity is near identical?

Let's take Mercury and Mars, notably similar in that they are both rocky bodies. Mars is comparatively large in terms of its physical dimensions, next to Mercury. It's surface area is much larger. Mercury is smaller by a significant degree.

Now, if you consider Mars to be an aircraft carrier, you see that massive object, floating on the waves, and you do not question it, because you know that although it weighs an absolute metric crapton, you also know that surface tension of the water, coupled with the surface area of the vessels hull, means that it will remain above the waves unless it's waterline is compromised. But the little tugboats that help pilot larger vessels...if one of those weighed the same as an aircraft carrier, it would sink.

In the same way, planets sit on the skin of reality. Mars sits there and creates a gravity well which is smaller relative to its volume, and Mercury being small issues the same gravity, but from a much smaller volume. The difference is the density by volume of the objects concerned.
edit on 6-4-2016 by TrueBrit because: Grammatical error removed.