posted on Apr, 5 2016 @ 05:24 PM
link
A Boeing 737-800, belonging to Batik Air, with 49 passengers and 7 crew, was taking off from Jakarta Halim Perdanakusuma, as flight ID-7703, when during their acceleration, a Transnusa Avions de Transport Regional ATR-42-600 under tow entered the runway approximately 4200 feet from the takeoff end. The 737 was unable to stop, and the left wing hit the ATR, as they were traveling at 110 knots. The crew aborted the takeoff, but the 737 suffered significant damage from the impact, and post impact fire. The ATR-42 suffered a severed left wing, and vertical fin in the impact.

One of Indonesian regional carrier TransNusa Air Services’ ATR 42-600s has been severely damaged in a ground collision with a Boeing 737-800 conducting its take-off roll from Jakarta.

Damage to the Batik Air 737 indicates that it struck the ATR with its left wing-tip during its departure from runway 24 in darkness at around 19:55.

The ATR 42 – registered PK-TNJ, and only around 18 months old – sustained substantial damage to its airframe including the loss of most of its left wing as well as its vertical fin and horizontal stabiliser. 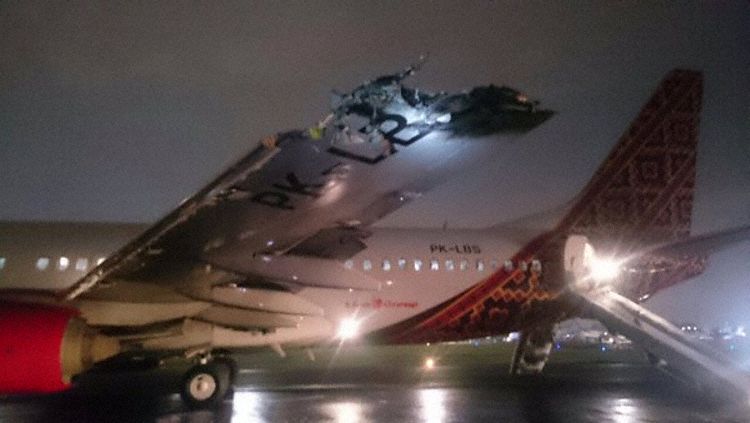 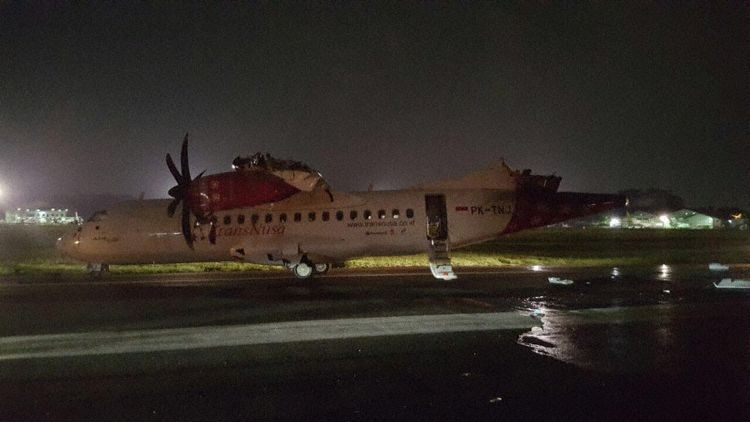 Runway incursions have been a major problem since before Tenerife, and since. Sometimes the controller screws up, sometimes it's the guys on the ground. They've been lucky so far that there have only been a few crashes caused by it happening.

I'm amazed that it hasn't happened more these days, both because of increased passenger volumes and due to the fact that passengers are taking more flights in smaller aircraft than they were even 15-20 years ago.

For a particularly morbid example, take 9/11, which in retrospect, horrors aside, paints an "end of an era" glimpse at lingering pre-deregulation fleet patterns. Both Boston-departing flights were using 767's for domestic service as Boston in 2001 was still essentially un-served by modern discount airlines. This meant that the pair of legacy carriers were the only ones operating transcontinental routes to LAX, and the passenger traffic (and fuel csts) were such that both UAL and AA could each justify putting a heavy like the 767 on a domestic route to LAX. Heck, I remember flying half-full AA A300's and 767s to even closer destinations like DFW and MIA back in the 1998-2001 timespan.

Fast forward to today, just 15 years later, and it's a radically different picture. At Logan, domestic heavies are almost never seen outside of the two 767s and an A330 that Delta uses for flights to London, Frankfurt, and Amsterdam (via KLM codeshare), and the closest thing that you'll ever see to a heavy in domestic service is the odd AA 757 to Miami or DFW, or the DAL 757's going to ATL. Everything else is now a mix of 737s, A320s, and E175s/E190s flying point-to-point pairings and higher frequencies on routes to major airports and airline hubs.

So instead of UAL and AA each flying a 767 every morning for a total of 450 departing seats, you instead have DAL, UAL, and AA each flying a 737-800 for ~480 departing seats, as well as JetBlue flying an A320 for another ~160 seats and a total of ~650 potential passengers to LAX each AM. So while transcontinental passenger volumes have increased by nearly 50%, the total number of aircraft to manage on the ground and in the air has doubled.

Even the international market has drifted towards "smaller" aircraft, and BAA/AF are now often flying two 777's staggered apart (or a 747 and a 777, or two 747s during holidays) where they once were flying single 747-400's. Virgin is doing the same with their A330s and A340s, and you almost never see a VAL 747 at Logan anymore. In fact, the only carrier that exclusively flies the quad-jets out of Logan anymore is Lufthansa who are good for two 747s or a 747 and an A340-600 every morning/evening. At the same time though, international traffic is probably 4x what it was back in 2001, only now, it's all 777's from Cathay and Emirates, A340s from Iberia, A350's from Qatar, A330s from Turkish, Swissair, Alitalia, and Aer Lingus, 787's from Hainan and JAL, 757s from Aer Lingus and Icelandair, the A310 from SATA, and even 737s from Copa and AeroMexico and A320s from WOW. The only new heavy service that I can think of is the planned upgrade of the Emirates flight to A380's once the Terminal E expansion is done (and the likely ensuing upgrade of BA, AF, and Lufthansa to A380s for peak times as well)

Given that this is happening everywhere in the US and (and that most if not all major US airports use runway/ground layouts that were laid down PRE-deregulation), it's a friggin miracle and a testament to modern ATC/GTC staff that we haven't had more Tenerife's.
edit on 6-4-2016 by Barnalby because: (no reason given)

Without turning this into a regional/mainline argument, the airlines shot themselves in the foot bending over backwards for the pilot union. They signed a contract that regional carriers can't have more than like 80 seats, and have to be below a certain MTOW because the pilots were claiming they'd lose flight time and experience.

Yeah, I wasn't intending to derail things into a discussion of the changing airline business climate and what may or may not have contributed to it, but more a glimpse at what the push towards ever-growing fleets of smaller aircraft has done to air traffic levels.

But yeah, imagine a world where the regional carriers were allowed to grow their fleets to include the A319s, E190s, and short-body 737's that those routes can handle, to funnel larger volumes of passengers into domestic 777/787 or A350 routings at lower frequencies and lower cost/passenger/mile levels. Now, my routing from Portland (ME) to SFO would still be a two-seater, but instead of hopping on an SWA 737 that I fly to Midway or Nashville where I hop on another 737 to SFO after a 1-2 hour layover, I can also hop onto a UAL E190 or A319 that takes me to EWR, where I then hop on a 777 or A350 that takes me to my final destination.

I'm sure the ATC/GTC guys would love that. The unbroken leg would certainly make the redeyes better.
edit on 6-4-2016 by Barnalby because: (no reason given)

If those routes can handle it then there are probably already mainline airlines with narrowbodies on those routes. And lower frequencies on large amounts of domestic widebodies won't happen because customers lots of times prefer more choices. This has been said by airlines quite a few times from what I remember.

Looks like there might be a few depleted Uranium ballast weights lying on the runway now from the 737!

The 737 will probably be repaired and fairly quickly. The ATR is a write off, no great loss according to engineers I know who have worked on them (ATR supposedly stands for A Total Reject). Its a parts hulk now.

What I want to know is was this a failure of the tower coordinator (do they have a functioning ground radar for example?), the 737 crew (did they begin their takeoff roll without proper clearance, which is shades of Tenerife?), or was it the tow crew not listening to the tower or ignoring the stop bars at the runway edge? Did time pressures or manpower resourcing have a part to play along with the weather conditions? All or a combination of these is possible and could be part of the "Swiss cheese' effect. One thing I am aware of is that in some parts of the world and Indonesia and Asia in particular, towing procedures can sometimes be followed in a very lax manner and this is exacerbated by procedures and doctrine that uses the absolute minimum number of people to save on time and cost. It is not uncommon to see just a tractor driver and no one else involved in towing, which is fine 98% of the time. But what if he doesnt see an obstacle in his path or fails to hear or correctly understand radio calls with the tower and other aircraft? Who else is there as a second set of eyes and ears to back him up?

When I tow our procedure is to use a driver, a PIC (Person In Charge) who takes overall responsibility and has the final say on a tow and rides in the tug unless he needs to get out for observation, and an FDO (Flight Deck Operator) whose job is to ride the brakes, turn on hydraulics and the APU and most importantly Monitor communications between tower and tug and in the event of radio failure in the tug act as a relay between the two using the radio and flight interphone. And that includes giving the tug and PIC a verbal confirmation that permission to cross the runway has been granted. Also where necessary because of tight spaces or a large wide body use two wing walkers to give clearance from obstacles or other aircraft. The system may be manpower intensive at times but it sure costs less than smashing a couple of aircraft together, which in the event of a runway incursion can not just cost careers but lives.

posted on Apr, 7 2016 @ 06:11 AM
link
a reply to: Blackfinger
Incorrect good sir, somewhere an airline sheetie is grinning, "overtime off the chain!"

posted on May, 4 2016 @ 12:21 AM
link
For the second time in a month, two aircraft have collided on the ground at Jakarta. A Lion Air 737-900ER and A330, bound for Manado and Denpasar clipped wings. Both aircraft were grounded due to the damage, which was said to be minor.