originally posted by: intrptr
They never saw pale faces before either, Europeans were a bit taller than most Natives.

Things like the sailing vessel, wagon wheel, gun and sword were also unknown to them.

Hence 'the wizards' i'd expect.

Most technology would seem like wizardry to primitive people living off the land.

Well, the Vikings had multiple settlements in North America...who's to say a longboat wasn't caught in a storm, blown off course and made landfall further South?

Many of those Scandinavian Viking warriors must have seemed like giants to smaller, slim natives.

The first south American tribe to make contact with the Spanish had a prophecy about the return of the white skinned god and recieved the Europeans AS gods, at first. They got tired of the" gods" after a few and turned on them.

Hi Steinbergmanstein, welcome to ATS. Yah on getting tired of their new overlords. Especially when they kidnapped their king, held him for gold ransom and then killed him anyway, brutally.


All in the name of greed hidden behind a religious facade.

Most technology would seem like wizardry to primitive people living off the land.


Wonder what they thought of the plethora of diseases Europeans brought with them that thy had no immunity for?

posted on Apr, 5 2016 @ 06:08 PM
link
It's possible that people become extra tall due to a parasite or tumor that affects the pituitary gland and causes Gigantism. Those individuals can grow 8 or 9 feet tall

Well, the Vikings had multiple settlements in North America...who's to say a longboat wasn't caught in a storm, blown off course and made landfall further South?

Many of those Scandinavian Viking warriors must have seemed like giants to smaller, slim natives.

There are a couple of misconceptions here. The first being the impression that the Scandanavians were considerably taller than other Europeans and the second being that Native Americans were sons ideally smaller than Europeans.

The average heights are only well known for males of this time period, mostly because militaries kept records of height and weight statistics, and from measuring the remains of battlefield victims, but the average height of "Vikings" was approximately 5' 9" with skeletons measuring from 5'6" to 6'. But even then, their height could vary depending on whether they were Danish, Swedish etc...

Likewise with native Americans, the Iroquois and Plains inhabitants were as tall or taller than contemporary Europeans and in better health, especially compared to the Spaniards who were closer to 5'8" and not nearly as fond of bathing as the Norsemen. Iroquois and Plains natives were upwards of 5'10"- 6' on average. While the Aztec were typically around 5'6" , a difference f only a few inches hardly makes for a giant when comparing to a 5'8" European.

Only the winners get to write it....Its how the paradigm is created....

posted on Apr, 5 2016 @ 08:53 PM
link
I think theres a Cheroke (I could be wrong aboot the tribe)
Ledgend of the last of the giants trapped in a cave by several different tribes.....
The warriors climbed above the cave mouth and threw burning material down in front of it....
They stoked that fire till all within the cave suffocated to death....and that was the end of the cannibal giants in that area at least.....
I have heard the cave was documented though.....
Ranchers digging bat guano discovered the remains.....
edit on 5-4-2016 by bandersnatch because: (no reason given)


Over 200 Giant digs have been found in recent years. Giant skeleton finds have not made the local/national news since the 1950's for the most part. It seems in most peoples opinion do to the fear that people would question evolution . If anything a de-evolution.

In 2002, National Geographic reported a dozen Cyclops skeletons found in Greece that stood 12-15 1/2 Ft tall. That is 3 humans tall. One eye socket. Giants in history are typically cannibalistic in nature. The reason why I am bringing up giants will all tie into politics, and word happenings. Look at a basketball hoop and add 5 feet. That tall. Greek Mythology talks about war with cyclops learning they had to bring down by taking out their legs rendering them slow and helpless. American Giants (Red Hair Giants) where found with egyptian writing on their tombs have been found in multiple locations.
edit on 5-4-2016 by bandersnatch because: (no reason given)

The Uluru archeological site, unearthed in 2014 by a team of
researchers from the Australian National University, led to the
discovery of a previously unknown megalithic civilization.
(oops this is a fake)so solly kiddies...
What could be the largest human skeleton ever discovered has
been unearthed by a team of archeologists from the University of
Adelaide at the Uluru archeological site near Ayers rock in Uluru-
Kata Tjuta National Park, reports the Adelaide Herald

originally posted by: Rapha
The 'Six Fingers' hybrids still exist today. The only difference is that they are as high as normal humans. 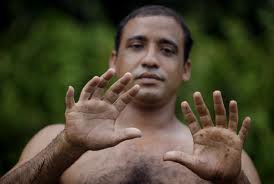 I wonder how dextrous he is.

originally posted by: rickymouse
Geeze, the giants did not have flat heads, that was only a hairdo. Just because a person is over eight feet tall, has some extra teeth, and have an extra finger doesn't mean they are canibals. I have people over for dinner once in a while, it doesn't mean they are the dinner.


When fallen angel DNA runs throughout a family, the entire family has 6 digits on each hand as shown in the following BBC program concerning a normal Brazilian family.

The big question will be what are humans going to be doing when real giants might actually start walking through the stargate portals that are rumored to be under construction in Time Square, New York and Trafalgar Square, London during April 2016 ?

Why the fact of giants existence in the past have to do with their agemda?

Well this is just a guess, but, the Bible mentions giants... Can't have people taking the Bible seriously, now, can we? Or any other ancient stories/myths. If the giants turned out to be true, people might start to wonder what else is true... Like the Vimanas, godlike beings coming down from the sky, ancient nuclear wars, nonhuman beings living within the earth, ancient civilizations with tech rivaling or exceeding our own, ancient (cyclical?) cataclysms, etc...

And isnt that strange how the vikings were so profoundly effected by simply travelling to the new world, growing an extra finger and an extra set of teeth? It's interesting how some people adapt to new surroundings.

Six digits or even seven was once seen as a sign of divinity in some ancient cultures, the Persian Emperor Xerxes may have been a giant of a man according to some theorys and to have also had six digits on each hand.

Maybe we are the abheration as virus have propegated into our DNA changing us and homogenising us into the eco sytem of the earth and just maybe we are not actually meant to have five digit's.

The base numeral system of the Ninevan kingdom which had there own version of the Decimal point and the number Zero also happens to be Base twelve and today we still count twelve hourse in the day and twelve in the night.

So many children are born with extra digit's that it is routine in most western hospitals today to remove them while the child is an infant, extra toes and fingers are not uncommon though because of this they are rarely seen today, because they are actually not uncommon maybe they are not a genetic defect but a regressive genetic trait?.

posted on Apr, 6 2016 @ 01:33 PM
link
Well I'm not arguing Hybrids existing and having jacked up teeth due to different jaw structures and such. I'm not arguing being very tall. But the six finger part, to me, seems like an exaggeration. I could see polydactylism in one or two as it's a mutation but not something genetic and passed along usually. So a whole race have said mutation makes no sense to me. Besides even fish have only 5 digits in their fins. There's really nothing thats genetically got 6 digits on earth. random unfortunante mutants maybe. Races or species though?

originally posted by: visitedbythem
a reply to: Helenamatias My Pop is a genius scientist. He is retired now, and pushing 90, but is a Chemist, Microbiologist, and has a medical background as well. He was director of research for a fortune 500 company for many years. He says that the bones of giants are being taken, and hidden from the general public because it blows holes in several theories and doesnt support the elite agenda for this planet.

Is there anyway you could persuade your Pop to join ATS and make a thread about these fascinating assertions?
Many of us, myself included, would love to hear from him!

originally posted by: lobsang
If giants never exists, why did we create the word... Giant

Hm. Interesting until you consider that we created the word "unicorn". (And 'Democracy", lol)

The endangered scotish wildcat is a native species of Scotland and once it was present throughout western europe, it is distinctive because it has six claw's on each foot but otherwise look's like a slightly large tortis shell house cat, they can not be domesticated though.

So your view is slightly flawed, generally most creatures have five digit's but not all and this is a sub species trait.
www.scottishwildcats.co.uk...
They do breed with domesticated cat's though.

originally posted by: BASSPLYR
But the six finger part, to me, seems like an exaggeration.


If that was true then the following statement in the Bible would have included your word 'unfortunate' as well. However, it doesn't because giants had six fingers on each hand.


2 Samuel 21:20 There was war at Gath again, where there was a man of great stature who had six fingers on each hand and six toes on each foot, twenty-four in number; and he also had been born to the giant.