Tom DeLonge (Blink-182) - Drip-feed Disclosure or something else?

I heard an interview last week with Tom DeLonge (Coast To Coast AM March 27, 2016) in which he continues to claim to be connected to insiders and claims he has the UFO Phenomenon figured out. According to him, he is going to be the one to bridge the gap between the common man and the government. He's here to enlighten us all!

(Background) According to him, he created a thesis of the UFO phenomenon, got some big meetings in which he shared his thesis with insiders, and presented his more detailed plan for bringing the information (as in the truth) to the masses. He claims that since his thesis was dead on and they liked his proposal, he has been led on to other big meetings. Over-all his proposal is going to be a series of "fiction" books (so as not to implicate the insiders, he says) as well as a documentary and music.

Am I the only one that is seeing red flags here? Is this an elaborate hoax, money making scheme, or is the intention to shape our beliefs and control the information? I guess there is always the possibility it is true disclosure, but I don't really think they'd pick a cheesy rocker for that haha.

Why is it always one of these Hollywood types? 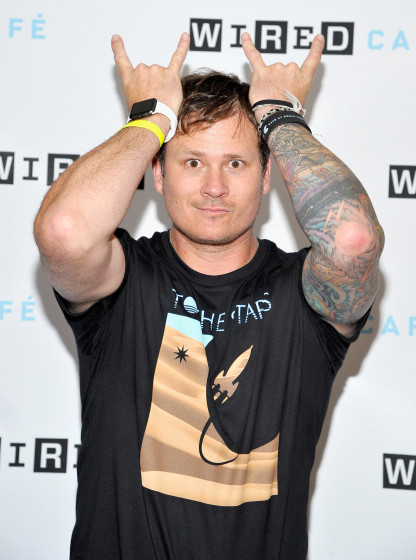 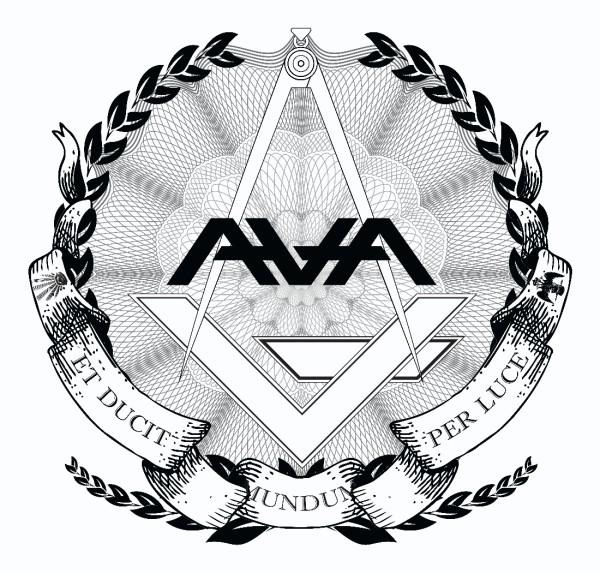 Logo of Angels and Airwaves, a rock group lead by Blink-182’s Tom DeLonge. The logo is blatantly Masonic as it contains the Square and the Compass, the All-Seeing eye on the left and the Double-Headed Eagle on the right. The latin saying at the bottom Et Ducit Mundum Per Luce is also Masonic in essence and can be translated to “And He Lead the World by Light”.

Obviously I am pointing out the link to the Freemasons, which I know we have some here in residence. Does this positively solidify anyone's response to this "disclosure"? Or does the link point to a conspiracy? Or is this just an elaborate way to get in your pocket? I doubt it has a very broad appeal, so choosing him (in my opinion) will not unleash a riptide of awakening.

Just something to be aware of and maybe to keep an eye/open-mind on!

Wait, is this the guy who's band sang the songs " Dumpweed" and "Aliens exist"?

I wouldn't hold my breath.
I don't think if we ever get disclosure, we will get it from a high as a kite band boy.

Just my own personal opinion. Thanks for sharing the video though, I will listen to it with a big tsp of salt.
He might be an avid believer in the UFO phenomenon but hardly a credible candidate to be spokesperson on the issue.

S&F for reminding me of that group, they had some cool songs, but I don't think they will be the first ever folks approved by the government nonetheless to tell us about the little green men.

I agree! It's weird though, as it appears he has actually gotten some pretty big interviews.

This article kind of hints at it and has some images: 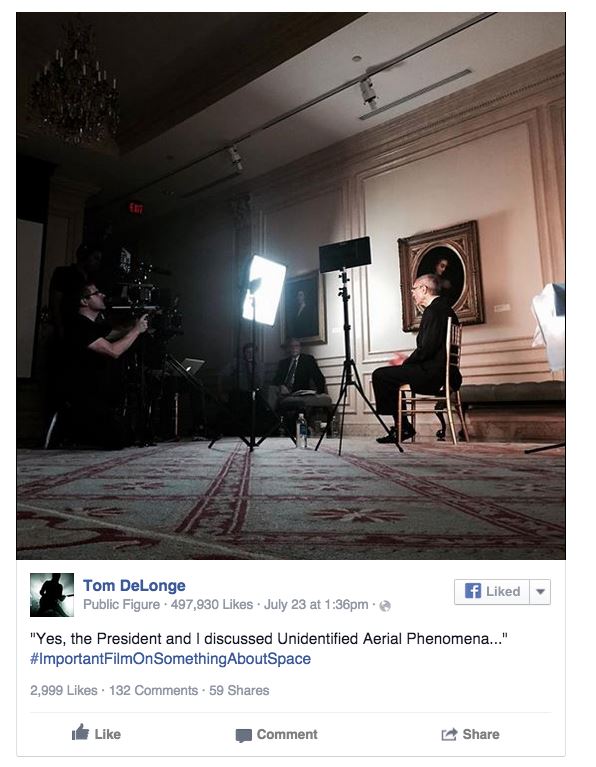 posted on Apr, 4 2016 @ 12:41 PM
link
Of course! The one person who has the credibility to deliver disclosure to the world is a very average musician! Furthermore, governments and 'insiders' always accept a random thesis and then go about asking the author to divulge its content on their behalf.

I'm going out on a limb here, but I'm saying that this is about as big a pile of bull as it's possible to put into a few paragraphs.

Red flags? All the red flags of China waved at once wouldn't come close!


You have to understand, I've been involved in this for a long time. I have sources from the government. I've had my phone tapped. I've done a lot of weird stuff in this industry -- people wouldn't believe me if I told them. But this is what happens when you start getting on an email chains with hundreds of scientists from the Jet Propulsion Laboratory and different universities around the country, and you start outing seniors scientists from Lockheed Martin talking about the reality of this stuff, guys that hold 30 patents, guys that work underground out in the Nevada test sites in Area 51. It goes far beyond just saying, "Hey, that little light in the sky, that's a little green man." That doesn't lend the right gravity to the topic.

You've had your phone tapped?

Yeah, yeah I did. For quite some time. Years ago, there was somebody who was gathering 150 hours of top secret testimony specifically for Congressional hearings on government projects and the US secret space program. People from NASA, Rome, the Vatican, you name it, they're all on there. The top 36 hours that summarized the best parts of all of that footage, I had it hidden in my house for a period of time, and during that time I was flying this person out along with somebody that was Wernher von Braun's right-hand assistant. Wernher von Braun was a Nazi scientist that we brought over to build our Apollo rockets that got us to the moon, and on his deathbed he told this person a bunch of stuff, and I was flying them out to Los Angeles and we were taking certain meetings. At that time a lot of weird stuff started happening.

Were you concerned about your safety at all?

Partially. Because they do weird stuff. At the time I didn't know it, but the person I was dealing with was being awoken in the middle of the night with clicking and buzzing noises and falling on the ground vomiting, every morning at 4 a.m. I know now that those are artifacts from mind-control experiments, where the same technology that we use to find oil underground, we can zap somebody at the same frequency that the brain operates on, and it can cause some really horrific things to happen. But I didn't know this until 10 years later. I got caught in the middle of it, and this was the time when I was on the cover of Rolling Stone, so I think these guys, whoever was running this operation, were like, "What the #? How did this kid show up?"

AND WE WOULD'VE GOTTEN AWAY WITH IT IF IT WEREN'T FOR THESE MEDDLING KIDS!

Fair play to him

He won't be the first person to think they've got it all figured out and he won't be the last. His ideas could be interesting and I look forward to hearing them.

Experience shows that most explanations say more about the proponents and originators than they do about the whole tangled mess of UFO sightings reports and associations.

posted on Apr, 4 2016 @ 12:48 PM
link
I had the pleasure of spending a few hours with Tom, several years ago, and one of the things that came up in conversation was the abundance of masonic imagery in his clothing and band material. He seemed to imply that he just liked the imagery and the mystery it invoked.

I did a search on that specifically and George Knapp asked him directly, in which he answered indirectly haha (just before 2-minute mark)-

Why the heck with serious UFO researchers sponsor Tom DeLonge to be their representative, when he doesn't have any formal education in the subject?

I have found that he's dabbled in business dealings outside of music since as early as 1998, but I'm confused as to why he seems fit for their "representative"? I know not all UFOlogists probably approve of this but it sounds like there was plenty of support for him

It's pretty interesting that Peter Levenda is writing the non-fiction material for his project, listening to the interview he sounds credible as far as these things go, at 1 hour 50 min' approx he mentions the overall paradigm that he's been fed by his contacts which is that the Others are gods, that the premise is inter-factional religious conflict, and i can see were Peter Levenda might get on board with that as he's particularly interested in the Third Reich having had some form of assistance from the Others

If you haven't already, you should visit Chris Knowles' blog The Secret Sun. He's a great guy and really gets into all the mythology, Archons and links between creativity and others.

posted on Apr, 4 2016 @ 04:38 PM
link
The red flag for me is the theme of how "the military industrial complex are the GOOD and heroic guys trying to save us from the Others." I think that is a spin that they would like us to buy into, and that some may believe this to be true. Remember, it is extremely rare for people to put bad motives on their own behavior, and much more likely for us humans to make our motives 'good' regardless of what we do and how its seen from outside of ourselves. Villains see themselves as heroes in their own story.

Maybe his thesis is true, and maybe its not. It would be easy to use Tom and feed his thesis back to him, now that he's given them the story he wants to believe. In any case, something seems off, on an intuitive gut-level.

Then again, I can see how the Others might be perceived as gods, and how they might cause havoc due to their own agendas with each other, as they play chess with our planet and our lives. This is assuming the Others exist in the way Tom believes them to, of course. Good gods and bad gods with mysterious and questionable motives - the things of myth or legend? In any case, it will be a good story.

ps - I'm really not knocking the possibility that there is truth in what he says, or that he has done what he says he has done. I'm just feeling a lot of internal caution over what he's saying - not wanting to be gullible.

posted on Apr, 4 2016 @ 08:32 PM
link
The OP is not getting it wrong.
It makes perfect sense that the ex member of Blink 182, Tom DeLonge would be the person chosen to initiate disclosure to the world.
Brilliant.

good find. we didn't talk about his being a member as it wasn't really why we were talking but, as I said, the question was posed and he answered, rather openly, about the imagery.

I find it odd that people get all up in arms when someone like DeLonge comes forward with their beliefs on these kinds of topics. If you, or I, started talking the way they do, nobody would listen and our friends and family would probably look to have us committed. When a celebrity does it, it gets heard, it gets press and it gets more people interested in the topics we all seem so very interested in. Is DeLonge onto something? Does he have answers? Hell if I know but I do know that he is spending his own money in an effort to research and get the word about his beliefs and that's something that I think is a good thing for this genre, or any other "fringe" topic as it helps further the possibility that, one day, we will discover the truth and find whatever answers we are seeking.

So, Mr. DeLonge, if you would kindly leave some tickets at will call the next time the band rolls through NY, I'd be grateful.

Thats what im talking about!

A nice change from the usual routine in the field.

Not saying I believe it all,I'm always the skeptic.

posted on Apr, 4 2016 @ 10:14 PM
link
Anyone that would allow themselves to be interviewed by that dumbass G. Noory has no credibility in my book.

I would have respected Tom more if he had of gone to A. Jones or Knapp.