The reason why this is such an amazing discovery, is because the last time archaeologists discovered a Viking site in North America was about 50 years ago, in the 1960s.

The only other Viking site ever to be found in North America was at L’Anse Aux Meadows, Newfoundland, about 300 miles from Point Rosee.

(Side note: I remember they found Viking remains and weapons near Hudson river back in 2015, when they stated that the Vikings most likely got into conflict with the indigenous people of the region. Just an interesting tidbit. ) Man, those Vikings sure traveled a lot. 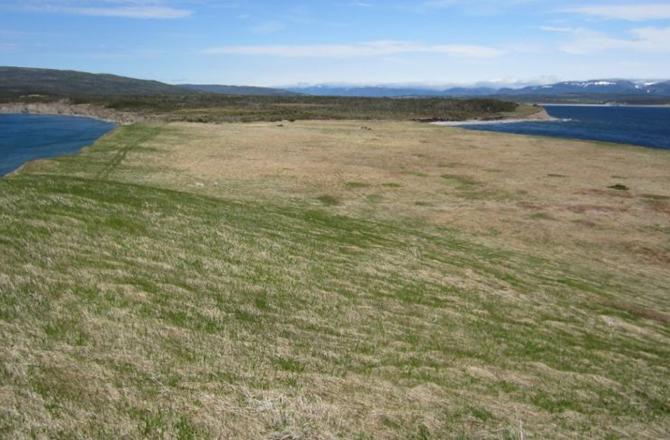 An overview of Point Rosee/Rosie, taken from the western end and looking along the headland/peninsula toward the mainland.

Satellite imagery, magnetometer surveys, and a preliminary excavation of the site at Point Rosee in Southern Newfoundland last year could point to a potentially fascinating discovery. The only other Viking site in North America was found in the 1960s at L’Anse Aux Meadows on the northern tip of Newfoundland, about 300 miles from Point Rosee.

The archaeologists’ investigation will feature in “Vikings Unearthed,” a special of PBS’s NOVA science series, co-produced with the BBC, that premieres online on April 4. The special will air on PBS April 6. Archaeologist Sarah Parcak of the University of Alabama, Birmingham, used high-resolution satellite imagery to spot ruins as small as 11 inches buried below the surface, according to NOVA. Satellites positioned around 478 miles above the Earth enabled Parcak and her team to scan a vast section of America and Canada’s eastern seaboard. The satellite images, two magnetometer surveys, and preliminary excavations suggest “sub-surface rectilinear features,” according to the experts, who also identified possible evidence of ironworking in the form of roasted iron ore. Radiocarbon technology has dated the site to between 800 and 1300 AD.

Experts will now be conducting further excavation and analysis of the site. “If confirmed as Norse by further research, the site will show that the Vikings travelled much farther in North America than previously known, pushing the boundary of their explorations over 300 miles to the southwest [of L’Anse Aux Meadows],” explained NOVA, in its press release. Initial signs certainly hint at a fascinating discovery. “A ‘Norse’ date and ‘affiliation’ do look rather promising, at this still early stage in the project, but we simply need more work at this site and more specialist input and peer-reviewed data before being confidant in stating this as ‘fact’,” explained the archaeologists, in a report of their research.

They cannot confirm this as a 100% fact, but based on the previous discovery, and their current data they are confident enough that this will be another Viking site. Confident enough to air it on TV.

Well, I'm excited. Would love to see some images of the site, once they begin excavation.

posted on Apr, 4 2016 @ 05:48 AM
link
This is very interesting! I watched America Unearthed and that guy (not saying he is worth anything mind you) has been a big advocate that the Vikings were here before Columbus. What do you think of that idea?

The Vikings WERE here before Columbus, L’Anse Aux Meadows IS a Viking settlement that pre-dates Columbus by 500 years, at least....

I had not heard of this site. I was thinking of the Naragansett rune stone.

I think it's more than possible. They did find Viking weapons and remains last year in America, and stated how they must have fought with the early inhabitants of the land, some died , and the other vikings moved on. 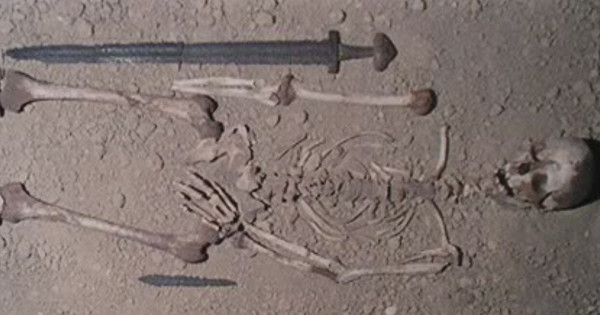 posted on Apr, 4 2016 @ 06:38 AM
link
I kinda dig this idea! I can see this as totally true in this light. I am going to look into this further during the little one's nap time today!

originally posted by: YachiruKusajishi
This is very interesting! I watched America Unearthed and that guy (not saying he is worth anything mind you) has been a big advocate that the Vikings were here before Columbus. What do you think of that idea?


I have a funny feeling there were Indians in the Americas before the Vikings so the Europeans didn't discover anything except a land they hadn't yet exploited.

posted on Apr, 4 2016 @ 07:59 AM
link
a reply to: yorkshirelad
I know that. I never questioned the Native Americans arriving here first. I was simply commenting on the arrival of European explorers.

Of course the Vikings here but the ethic organization was in favor of a later group of travelers.

originally posted by: JaMeDoIt
Yea but Columbus discovered America...or did you miss that day of school?

Of course the Vikings here but the ethic organization was in favor of a later group of travelers.

Of course I didn't miss that day, but did you miss the day where thanks to ongoing discoveries in science and archaeology we keep learning new and fascinating things about our planet and its history?

posted on Apr, 4 2016 @ 02:54 PM
link
Interesting to see what will be found if there's anything there. Also, interesting find if anything bones or other, is at the site to help with genetic findings as discussed below;

"American Indian Sailed to Europe With Vikings?"
Centuries before Columbus, a Viking-Indian child may have been born in Iceland.

It won't be solved, he said, until the DNA pattern's origins are nailed down, perhaps through the study of ancient DNA—for example, if an ancient Native American bone is found with DNA closely matching the Icelandic variant.

"I have no historical sources telling me" that Vikings took Native Americans home, said Gulløv, the historian. But often when new data is uncovered, he added, "we have to write history anew."


Source
Vs the markers being from Siberian populations mixing with the people that were to become the Vikings and or Icelanders.
edit on 4-4-2016 by dreamingawake because: ex text correction.

Well they found the roasted off bog ore which indicates metalworking.

originally posted by: Soloprotocol
Disappointing. They found nothing worth talking about.

It's still quite early in the investigation of this site. The article says that there was a preliminary investigation only last year. The radiocarbon dating of the material suspected to have been used for iron manufacture is particularly encouraging, as the dates are around the same time as the settlement at L'Anse aux meadows was active. It will take many more years of research and archaeology to first confirm a Norse presence at the site and then determine other things like how large the settlement was and for how long it might have endured.

there is no doubt of that.

A lot of people were here, from Europe, before Columbus. Though it is more conjectural. Celts. Romans. Phoenicians. Irish monks (just for giggles).

I have heard about the possibility the Phoenicians were here before Columbus. However I took it with a grain of salt because the source was America Unearthed. LoL I do find the idea that the history of this land isn't what we were taught in school. Ancient history is really quite fascinating anyways and has and always will hold a special place in my heart. Egypt is my favorite though. I don't really know much about the Phoenicians, Babylon (outside of it having one of the Wonders of the Ancient World). I think tomorrow will have some further studies on my part!

The rumours have been around for decades, probably. Not a whole lot of evidence to back it up.

They certainly could have, but the question is did they? Personally? I doubt it. But who knows? That era in history is pretty blank.

It does make for really cool what if conversations, though