All Members who have PC Problems

I'm still moving, but in a week or two, I need to figure out how to make the Apple Time Capsule store files and then be willing to share them with me, once they are inside the damned thing. Do you know how to do that? I tried reading every direction I could find on the internet. The machine just comes with a card that says hello. I'm beginning to think that "hello" is code for "sucker!" Anyway, maybe I'm misunderstanding your offer, but if it's good, again, WOW.

posted on Apr, 2 2016 @ 05:14 PM
link
I've just installed the os2200 mainframe software from unisys and wonder how i can get things started with allocating diskspace and install the relevant compilers and how if they have cobol how it differs from standard cobol-77 as i fancy writing a replica of a 1970's style system for dumb terminals.

You should know that its impossible to answer any possible question, how many bytes is the shortest way to reboot a computer under dos for example (if memory serves its 3 bytes) or which resistors to short to reboot a BBC model B with the cover off.


I've just installed the os2200 mainframe software from unisys and wonder how i can get things started with allocating diskspace and install the relevant compilers and how if they have cobol how it differs from standard cobol-77 as i fancy writing a replica of a 1970's style system for dumb terminals.


You almost made me spit my my drink out. I wasn't expecting that. Only a total geek could appreciate the humor in that little paragraph. Let me know when you get it done. I wanna see the video. Of you with less hair than you started with, not the mainframe.

You had me @ mainframe

Sorry I don't know much about apple products.

Oh please tell me your running that on an virtual machine. Simply 'cuz I think it might puke with the system clocks being over 8mhz now.

"More then 640k base system memory!! does not compute!"

It says press Any Key to continue.....I've just been staring at my keyboard for like an hour and it's not there.

I bought 5 new keyboards so far and I keep having the same problem.

I was thinking about drilling a new hole in the keyboard and making my own "any" key. But I'm not sure it will know what key it is even if I label it as "any".

Should I get a camera so the computer can see what I label the key as once installed???

originally posted by: rigel4
Thats known as a code 18 or an ID 10 T fault

I'm going to post here just in case I have a lapse of judgement.

Thank you for offering to help it is much appreciated.

posted on Apr, 2 2016 @ 08:53 PM
link
I am a bit confused about su and sudo. I read that only experienced users who allocate specific tasks to the wheel group should use sudo. A carte blanche sudo is just another root account so therefore better an inexperienced user to use su. From what I see most Linux users use sudo. Just switched from Fedora to Linux Mint and still trying to get my head around root having no password.

posted on Apr, 3 2016 @ 12:57 AM
link
Ok here is a good one, My second system a Dell Latitude e5410 running windows 10 eval version build 14279.rs1_release.160229-1700 has been having an issue with my older Direct X 9 and 10 based games. The issue is Rampant overheating causing the system to Shut down and refuse to turn back on until it cools. I use a Dell docking station to connect my off system devices like my external unicomp imitation ibm pc-144 Keyboard, my Panasonic TV, my Logitech marble mouse Trackball, and two 8 gig flash drives used as ready boost cache memory.

I have tried placing a comericial Cooling pad under the lap top to try and sink the heat but it does not seem to work, and the heat issue only seems to happen when I run things like CIv5 civ4 civ3, undertale, and of course some of my older games like sid meyers pirates, or Zork (yes I got the whole infocom library Leather goddesses of Phobos for the win)

If I use it just for chrome or in browser games I get up times well close to a month at a time. (not counting the ugh forced updates) But gaming I over heat like mad. I was wondering if there is a Bios setting to prevent this or is there a windows setting to adjust to prevent the over heat issue. My main rig (an All Mistakes combined monster that was born in 2000 and has survived with multiple transplants) does not have this issue, in fact the dashboard that came with the Mobo showing me the heat shows no change from running as a browser to gaming... but then it is also the one that sounds like a jet engine due to the hacked in fans on every free power plug on the dual 500 watt power bricks.

The other problem I have with the lap top is getting to the flimsy heat sink on top of the proc to re goop it with a new thermal grease seal between the proc and the heatsink, a good 5 to 6 hour take apart and reassemble to make sure I did not generate any Japanese screws in the process. I am pretty sure that is not the cause of the issue.

Needless to say it has a Coder Like me Stumped, any Suggestions?

Drool, so are you targeting a vax/dec/or sun style clone for your main, the dumb terminals (green screens) can be augmented with a Telenet over TCPIP connection which would save you the cost of finding the obsolete hardware...

sorry could not help but drool over the idea...

Try setting up your equipment in a big walk in freezer and play your games there.

It has the added benefit of keeping your beer cold while you play too!!

Ah but I have just enough reptilian dna to hate the cold you know, Plus the condensation would ruin the hardware and warp the wood of the desk... 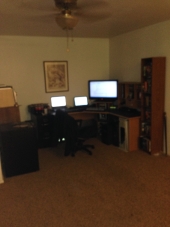 the laptop in question is the one in the middle, never mind the networked mess under the desk...
edit on 3-4-2016 by CoBaZ because: extra comments

Hmmm....That is a tough one after all.

Perhaps enclosing it in a transparent box with dry ice and using a wireless key/mouse/speaker setup.

Only need to open it up now and then to change something physical or to load with more dry ice!!

Seriously though, that doesn't make much sense. That software shouldn't cause that. It almost sounds more like a software conflict that is causing a false alarm.

Does it actually get hot or just say it's hot and shut down???

For example, when it restarts have you checked the bios to see if it still reports it above normal temp??

Also, is it the CPU overheating or could it be your Video???

It could be that it doesn't see that older software as being more intensive and doesn't know to adjust fan speed for it. I can't imagine any old games causing a significant load on a modern system enough to actually cause overheating but who knows.
edit on 3-4-2016 by mOjOm because: (no reason given)

posted on Apr, 3 2016 @ 01:39 AM
link
I am thinking it is main because the place on the computer that overheats (hot to the touch) is the area to the left of the touch pad, where the main heat sink and slim fan sit.

Like I mentioned my beast does not have this reaction just the laptop, Mind case modding the laptop is not as much of an option because of the fact I like to eject from docking station and go have coffee at the local breakfast house on weekends.

(wrote some of my best posts from there)

And Yes I could move my gaming back to my monster but then what if I wanted to go to a friends house for multiplayer networked games, I can not see lugging the beast under my desk around.