These are Analysis of the 30 September 2013 BBC Panorama documentary 'Saving Syria's Children' and related BBC News reports, contending that sequences filmed by BBC personnel and others at Atareb Hospital, Aleppo on 26 August 2013 purporting to show the aftermath of an incendiary bomb attack on a school in Urm Al-Kubra are largely, if not entirely, staged.

These attacks that occurred while BBC was there in Syria for the Panorama were completely fake, staged. The article clearer shows why.
I always did question the majority of those videos which are released by the opposition.

The insurgents are getting desperate. Their supply lines disrupted, communication and intel breaking down. They are being decimated by the combined forces of the Syrian Army and Russian air support. They are being pushed into an ever tightening pocket (in Raqqa) and even recently threatened the Christians there.

Wait till that killing fest begins, it won't be staged or faked.

People should understand these murderers won't go quietly, will do anything brutal as can be to convince us here in the west 'something must be done' in a "Humanitarian Intervention" way.

Try not to get to upset, destroying these terrorists is a good thing, remember? The Syria Army is the best qualified and combined with the Russians now is doing the job just fine.

Just recently Free Syrian Army and alongside JN have taken areas from SAA. They will be bombed by Russia.

These are Analysis of the 30 September 2013 BBC Panorama documentary 'Saving Syria's Children' and related BBC News reports, contending that sequences filmed by BBC personnel and others at Atareb Hospital, Aleppo on 26 August 2013 purporting to show the aftermath of an incendiary bomb attack on a school in Urm Al-Kubra are largely, if not entirely, staged.

These attacks that occurred while BBC was there in Syria for the Panorama were completely fake, staged. The article clearer shows why.
I always did question the majority of those videos which are released by the opposition.

Yes, that sequenced video has the subject of debate before. Ian Pannell showed the 'bad acting' part as something uncofirmed, not that it made much difference. And there is video somewhere of changes of background in the ambulance scene with the female 'doctor' in the foreground shown briefly in the OP video, that is concerning as it indicates re-enactment.
Then of course the audio doctoring.

A link to a comprehensive background to all the events, and it's a long read. One thing to remember is that the Panorama SSC was in stages, and a deal of time after the original pictures were shown on the daily news, as well as the fact that scenes were doctored in the original reports. One scene for instance, showing a woman with ointment on her face is shown protesting to get into the hospital, while in fact she had already been treated. There are other anomalies about the school that was supposed to have been hit by CW. It has been said that the school was not open that day. That's why you really need to go into this in depth, and while the BBC pulled certain news sequences of SSC shown on youtube. (many of those were already copied and are stored in video uploading sites) other than youtube...who is not your friend, and most like, Google is not your friend iether.


Iam adding this section in explanation,
First picture shows...
When she says NAPALM, 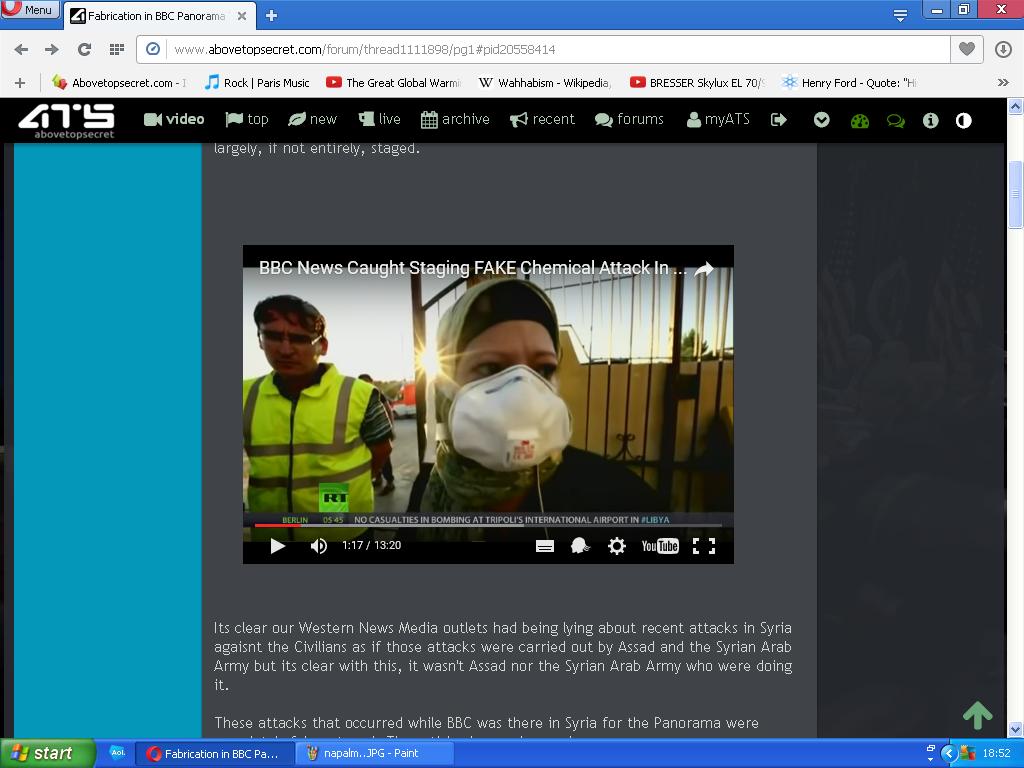 
When she says chemical weapon, 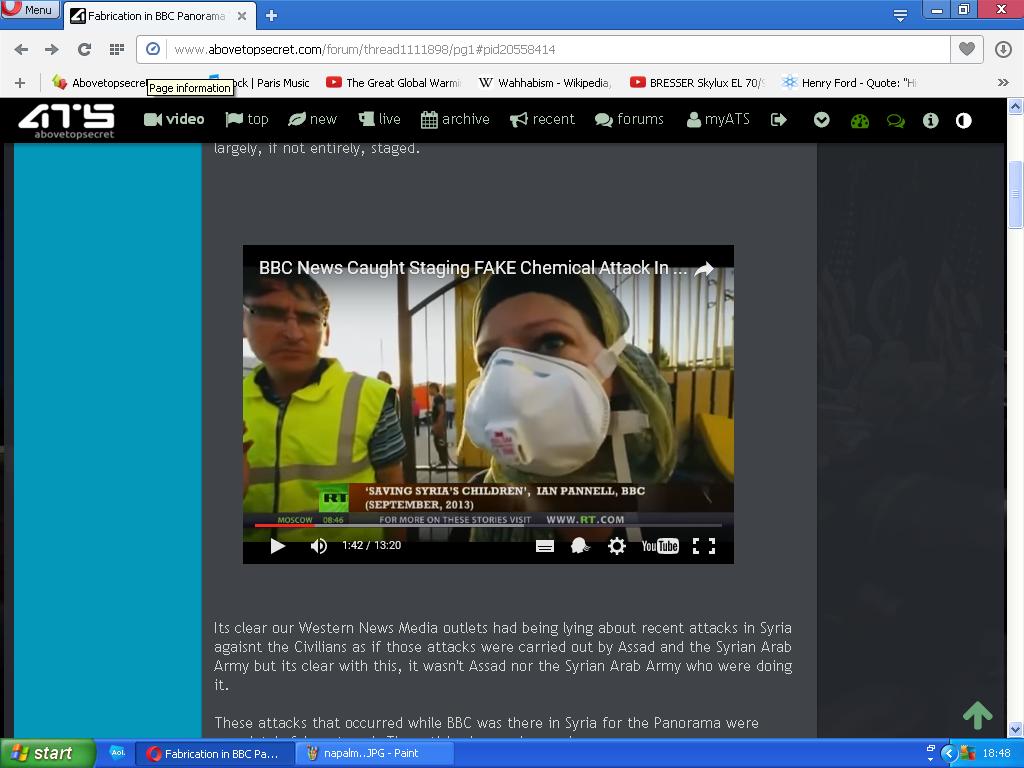 Thing is the guy in the OP's video talks about the audio being changed, what is more likely though, is that what we have here are two versions of the same scene being acted out on the same day. Minor differences in the background and stances show that they are not the exact scene that has been dubbed over, but that one is a re-enactment. You can look at them more closely at the ats linked address.

posted on Apr, 2 2016 @ 11:39 AM
link
Practically all of the news told to the west comes from this shady group called :Syrian Observatory for Human Rights.

Its located from the UK and ran by one person!

SOHR has been accused of selective reporting, covering only violent acts of the government forces against the opposition for the first two years of its existence. Although critics concede that its reports have become less partisan, critics interviewed by AsiaNews, the official press agency of the Roman Catholic Pontifical Institute for Foreign Missions, charge that as of 2013 SOHR "continues to defend Islamic extremists to avoid losing support among rebel forces".[

"Charlie Skeltom, in a 2012 opinion piece in The Guardian,[10] questioned the wisdom of those who quote a source that amounts to nothing more than a lone clothes seller, living in Coventry, posing as an organisation with a "grandiose" name.

SOHR's methodology for counting civilian victims has been questioned by Patrick Henningsen on RT[11] as the organisation includes opposition combatants among the number of civilian casualties, as long as these are not former members of the military.[12]

RT has found SOHR's reporting to be inconsistent: on October 1, 2015, SOHR's English-language website reported "Russian warplanes killed 30 civilians in Homs including women and children"; the claim was reported by many major Western news outlets, like the British newspaper The Independent.[13] Meanwhile, the Arabic-language version reported "27 civilians dead in airstrikes by Assad regime air forces", without mentioning Russian warplanes.[14]

During a press conference in Moscow on October 22, 2015 Russian Foreign Ministry spokeswoman Maria Zakharova, dismissed the SOHR as lacking credibility and described director Rami Abdel Rahman as a British national "with neither a journalism degree nor a legal education... not even a secondary education" and no more reliable than "a waiter in a pizzeria."[15]"

Major western news agencies all quote from this group and it is the primary vehicle for information in the west of whats going on in Syria.

Likely this group is run by MI6

Just recently Free Syrian Army and alongside JN have taken areas from SAA. They will be bombed by Russia.

But do go on with the good and bad ones, the extremist and moderate, the opposition and the freedom fighting kind, all 1000 flavors…

I know many heard early on of the "rebels" killing and then filming. Trying to blame the regular forces.

The rebels that Hillary wanted to arm were known terrorists.

posted on Apr, 2 2016 @ 03:57 PM
link
a reply to: TaleDawnHardly surprising coming as it does from the UK governments media lackeys. The BBC have rather a chequered history in the truth manipulation department, after all they were very, almost obscenely. Quick to distance themselves from the Saville affair ,they were quick to drown us in simpering. Sycophantic platitudes when Diana copped it in Paris. The BBC will do exactly as they are told.

So the BBC are apparently "Saving Syria’s Children".

Sounds admirable enough, but what for so there presenters and hosts can molest them?
edit on 2-4-2016 by andy06shake because: (no reason given)

Speaking of Saville whatever has happened to Saville BBC reporting?

posted on Apr, 2 2016 @ 04:51 PM
link
Tells you everything you need to know about the so called "impartial" BBC. Government Shills. Biased Broadcasting corporation. Stick you licence up yer arse BBC.

My question is why did they no show these sorts of vids when ISIS was just bout home in terms of taking the country over. Why are they only showing these now when it appears that ISIS has lost the war and the Russians and Syrians are nearly at the mopping up stage.

Why did the BBC not show these sorts of vids from Palestine, Iraq, Lybia, Afghanistan and Pakistan where that kid from Sandy Hook got killed twice.

posted on Apr, 3 2016 @ 06:58 AM
link
Wrote to bbc when this aired and got a response that basically said "From time to time we edit videos for clarity" it wasn't much of a response at all but I suppose it was a roundabout admission that it's BS and the news can't be trusted. I'll see if I can dig it up.

originally posted by: MagnaCarta2015
Wrote to bbc when this aired and got a response that basically said "From time to time we edit videos for clarity"


Oh! They said that alright, you will find reference to it in the global research link at my last post, they also said they retain the right to edit film out of order without reference to the watcher, (that's the type of thing done aplenty by the US TV/UK TV /all media all the time, and especially on 9/11) but the video of a woman with ointment on protesting about not getting into the hospital was false since she had already been treated...and they had to apologise about that.

However that is small dibs compared to staging, and redoing scenes in what's supposed to be realtime footage as the situation develops, never mind using other footage by someone else...so they said, (the zombie children) that was plain ridiculous.

Another thing, all that footage was taken three years ago, it was used in regular news broadcasts, (that's when many people saw discrepancies and wrote in).
It was some time then before the Panorama special was shown, with even more editing, so none of it is relevant now, but it surely was back then,.....a show for Westminster.
In the meantime running up to the Panorama special, that nurse was back in England, and wheeled into the Newsnight studio to relate again what happened, and what was happening in Syria. Now there is grave doubt as to that whole thing ever happening at all, and was staged.
edit on 3-4-2016 by smurfy because: Text.