page: 1
25
log in
join
share:
Kandinsky
+5 more
posted on Apr, 2 2016 @ 01:40 AM
link
In a superb act of old-fashioned ingenuity, a group of young children helped the police to catch two suspected burglars. 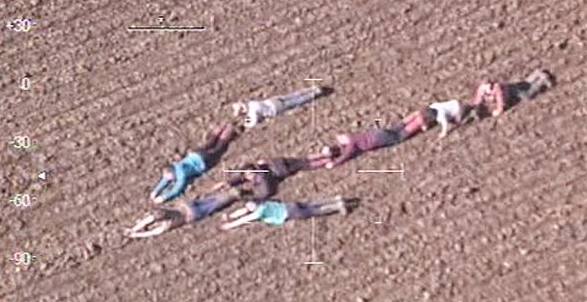 The two alleged burglars had been reported leaving a scene of crime and the police helicopter was duly notified as the runaways successfully hid amongst the farmer's fields. Unluckily for them a group of kids were playing hunt the Easter egg and saw where they had hidden.

It's heart-warming to see them be quick-witted enough to lay down on the ground and form that arrow. Praise too to the police for paying attention to what the kids were doing and taking them seriously.

It's like a scene from an old adventure book. Kids outdoors enjoying some honest fun and a pair of bumbling crooks stumbling across their path. In the finest traditions of English children's stories, I hope each and every one of them was treated to a 'slap up feast' and a letter from the Queen of England

originally posted by: Skid Mark
a reply to: Kandinsky
They would've gotten away with it too, if it hadn't been for those meddling kids-
Scooby Doo

It's a totally Scooby Doo escapade!! I'm glad there's documentary proof that a group of kids are actually playing outside in 2016 instead of playing CoD and calling others retards through the headsets.

This is brilliant. My parents always said never to point. It's rude. If you can't use your finger. Rely on the eye in the sky and 8 of your closest buddies.😉

posted on Apr, 2 2016 @ 02:14 AM
link
Genius! You've got to love child ingenuity. I'm sure that a child's mentality and way of thinking seeps away by the time you hit late mid to late teens.

From reading the title I was expecting bows to be involved too!

It's been on all the UK TV news stations this morning. Put a huge smile on my face.

Also made me recall being a kid and how we'd walk through farmer's fields. I used to fetch broken bottles home because they looked so old...mum and dad must have loved that

"Getting nettled! Picking blackberries!" 👈 and this reminds me that it's late and I want pie😊

The kids doing this and my love of pie also put a smile on my face.😊

I gotta say I agree with you. I admire how these kids are outside instead of playing CoD. In the process, they became productive members of society by doing things like aiding the police on catching criminals.
edit on 4/2/2016 by starwarsisreal because: (no reason given)

originally posted by: starwarsisreal
a reply to: Kandinsky

I gotta say I agree with you. I admire how these kids are outside instead of playing CoD. In the process, they became productive members of society by doing things like aiding the police on catching criminals.

Yeah, being outside on what looks like a sunny day is great to see. Tromping through grass and scrabbling through the soil of the fields has gotta be better than another day in front of the TV.

Fair play to their families too for getting out there and hiding the eggs so far away from the back gardens.

Hmmmm....maybe they wanted some peace and quiet lol

That was freaking amazing… the kid down there that thought that up gets the situational awareness genius award.