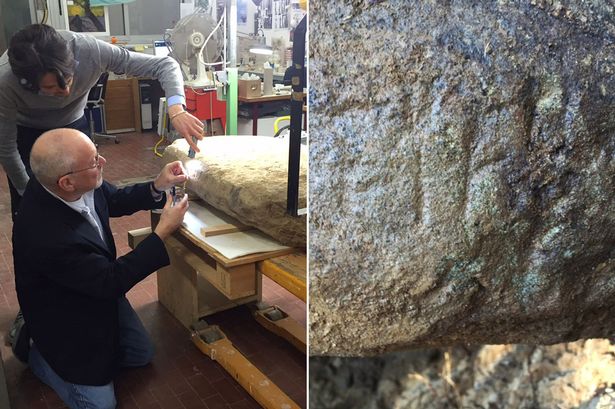 Archaeologists have dug up a stone tablet which is thought to contain evidence of a mysterious God worshipped by an advanced ancient European civilisation.

The massive slab is 2,500 years old and was produced by the Etruscans, who lived in Italy before the Romans got their empire going.

Although researchers do not yet know how to read the language used to inscribe the stone, it is thought to contain details of the name of an Etruscan god.

"We know how Etruscan grammar works, what's a verb, what's an object, some of the words," said Professor Gregory Warden, who led the dig and is principal investigator of the Mugello Valley Archaeological Project.

"We hope this will reveal the name of the god or goddess that is worshipped at this site."

Here's a cool little story of an interesting find. It doesn't surprise me that such a find especially of this type was found. The idea of gods that have come and gone are a common theme all throughout human history regions. Finding the name may shed light on a new angle of ancient European beliefs and may help us understand the origins of certain regional cultural uniqueness.

i enhanced the image and inverted it and a few extra things.. Yeah, i think the researchers are idiots 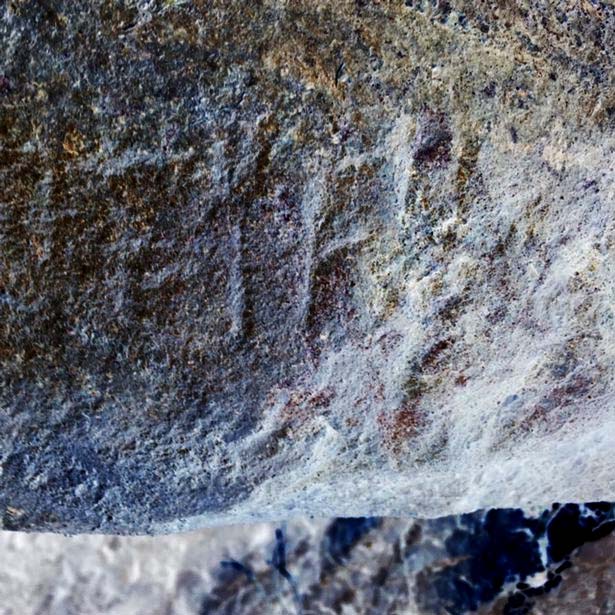 Cool find Up until recently I have wondered about the many gods we find in different cultures . When I came across Dr.Micheal Heiser's work on the divine council and the issue of Deuteronomy 32:8 and the Sons of God it all started falling in place ,and is easier to see how it fits ..A pdf of his take on it . www.thedivinecouncil.com...

It always concerns me that everything that is unknown will be attributed to religious worship or religion itself.

This is apparently an absolutely unknown inscription, yet just because it's found in the ruins of a temple (and the story doesn't go into details about the temple, either, or how they know that it was a temple), they "hope" that it will be the name of a deity, and so suddenly, based on hope, the headline is that a new god has been discovered.

I hate the arduous task of having to wade through the sensationalism sometimes, all to find that, right now, there's really nothing there except the reality of a neat discovery that may (or may not) help shed light on a culture about whose religion we seem to know little about.

I appreciate the post, but just wish that the link and information was a little better presented and more thoroughly expressed.

Archaeologists are increasingly reminding me of David Childress of "Ancient Aliens" infamy, only instead of "it must be aliens," archaeologists default to "it must be religious." It's getting tired, much like how all climate change must be a result of humans, or everything bad that happens in the world is funded by Big Oil, or all inter-racial violence is because of racism, or any of these lazy explanations.

Sorry, I don't mean to rant, but I just feel like I see these uninspiring claims in archaeology all. of. the. time. It's really detracting from my love and enjoyment of the science.

posted on Mar, 30 2016 @ 09:24 AM
link
Guys. It's not English. Stop being doofuses trying to read it. About a quarter of the letters in the Etruscan alphabet look similar to "F."


originally posted by: SlapMonkey
a reply to: SLAYER69

It always concerns me that everything that is unknown will be attributed to religious worship or religion itself.


I disagree. Archaeologists often take one look at something and say "It's probably just receipts." The Etruscan people considered everything to be divine. The archaeologists would obviously know this and factor it in to their analysis.

posted on Mar, 30 2016 @ 10:01 AM
link
In a few thousand years archaeologists will uncover massive golden arches and judging by the human debris will conclude that these temples were places of worship to clown deity.

the symbols look like:
(not sure if this is a symbol or a crack) ear or wunjo

Though these guesses are based on my understanding of runestone symbols, which would imply that this could be nothing more than a Celtic god being worshiped in classic Italy. (which doesn't go without saying since the Celts were mentioned in the Iliad)


edit on 30-3-2016 by Guyfriday because: edited to add some stupid god name possiblities.

originally posted by: SlapMonkey
a reply to: SLAYER69
Archaeologists are increasingly reminding me of David Childress of "Ancient Aliens" infamy, only instead of "it must be aliens," archaeologists default to "it must be religious." It's getting tired, much like how all climate change must be a result of humans, or everything bad that happens in the world is funded by Big Oil, or all inter-racial violence is because of racism, or any of these lazy explanations.


The reason they find more religious items is that these structures and items are built not for people but for the beings that the people believed lived forever. The first stone buildings of any culture are usually temples; the second are kings' palaces or tombs. Hence, most of the surviving goods (grave goods, utensils, offerings) are for royalty or deity.

Poor people 'made do' with a lot of things and built cheaply (mud brick) and so forth. A wooden spoon carved by Nahkt which was taken to his shallow grave at his death doesn't survive 3,000 years as well as (or in as good condition) as a gold incense spoon dedicated to Amun-Re and buried in an offering cache at the foot of a stone temple.

posted on Mar, 30 2016 @ 10:53 AM
link
The writing could also be the signature of the creator of the art or maybe the art was created to praise someone or an entity. Kind of an address to who it was sent.

I'm a little confused, can you please explain why you think they are idiots? It seems like you believe you have discovered something in the inscriptions or maybe have even fully translated it. May I ask what is your interpretation of the stone carvings?

I have no idea, reminds me of runes, could even say;" I was here for all i know "

i got a OT question, do you have images of the ankh? in all its forms and glory?

Brilliant! Thanks for the thread, yours are always worthwhile!

No, don't get me wrong--I fully understand that part of ancient cultures, but just the fact that this is an absolutely uknown or undeciphered text, yet because it was found in a palace and they "hope" that it has something to do with the deity that the Etruscans worshipped does not, in any way, deserve a headline as sensational as it has gotten.

And I still feel that the need to default to many things being about religion if it is an unknown is still a problem.

originally posted by: MoreInterior
I disagree. Archaeologists often take one look at something and say "It's probably just receipts." The Etruscan people considered everything to be divine. The archaeologists would obviously know this and factor it in to their analysis.

Some do, but some also do not, and to sensationalize a headline based on the "hope" of the archaeologists is poor journalism, and a backhanded way to gain interest into something that, as of right now, is of mediocre interest, even for someone like me who loves archaeology and discovery and routinely wishes I were a field archaeologist, as tedious and relatively boring as it actually is.

In many discoveries over the years I've felt as you do now. This may be the case here as well. However. I'll take a wait and see approach and simply post the report as is.

This is a great site to write and post your own take on things.

You may have a very good thread premise idea to write in your future.