posted on Mar, 29 2016 @ 04:41 PM
link
Talk about a catch-22. In less than 10 minutes, I have to decide between seeing Joe Satriani or The Expendables tonight. Both shows fell on the same day and that is certainly a cruel trick to play on me!

Anyways, for those interested, Les Claypool is taking a break from Primus. I was lucky enough to see them recently and those that did will certainly remember the GIANT MUSHROOMS AND OOMPA LOOMPAS!!! 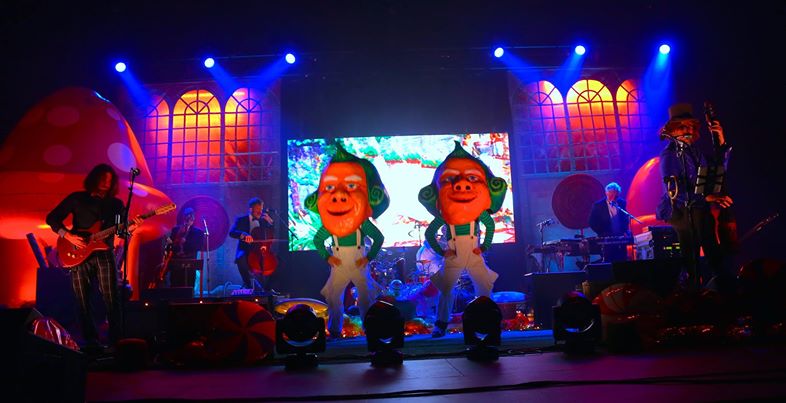 (Try not to loose your head during that show, lol!)

Two worlds have collided, and what glorious and odd worlds they are. After a successful summer tour pairing Primus with Ghost of a Saber Tooth Tiger, Les Claypool and Sean Lennon have decided to combine their abstract talents into a project called The Claypool Lennon Delirium.


Below the videos, it goes into more detail about the collaboration. He originally tried to reunite Oysterhead (too bad...), but that fell through. I hope this musical alliance produces something fresh as after you work with Les once, you're technically "on call" for life.

Well, not if you're Oysterhead.

Have a listen and tell me what you think!


“Sean is a musical mutant after my own heart,” said Claypool. “He definitely reflects his genetics—not just the sensibilities of his dad but also the abstract perspective and unique approach of his mother. It makes for a glorious freak stew.” After some impromptu, backstage jams and an epic live sit-in on Primus’s psychedelic opus, “Southbound Pachyderm,” Claypool approached Lennon about doing a recording project. “I was trying to wrangle up an Oysterhead reunion since Primus was taking a rest for 2016 but the planets just wouldn’t align for that,” said Claypool. “I don’t like sitting around, so when Sean said he didn’t have plans for this next year, we started kicking around the notion of making an old-school, psychedelic/prog record. Next thing I know, he’s staying in my guesthouse, drinking my vino and banging on my drums.” Lennon responded, “I told Les that I was Neil Diamond’s nephew. I think that is what really sold him on the idea of working with me.”

Over the course of six weeks or so, the two wrote and recorded a total of ten songs with both of them sharing various vocal and instrumental responsibilities, going beyond their core instruments of bass and guitar. Claypool explained, “Usually I play the drums and percussion on my records but Sean has such a different feel than I do, it just made more sense for him to man the kit on most of the tunes on this project. I took the helm at my old vintage API console and let him bang away. He was happy as a piggy rolling in # every time he grabbed the sticks…his drumming is like a cross between Ringo and Nick Mason. But I think folks will be most surprised by what a monster guitar player he is, especially when you prod him a bit.”

“Monolith of Phobos” is just how the title implies—an old-school approach to a psychedelic space rock record. Lennon added, “It’s been an honor and a challenge playing with someone of Les’ caliber, but luckily the Gods of Pinot Noir shone favorably down and granted us a bundle of devilish tunes about monkeys, outer space and sexual deviancy.”