Shackled Skeletons From Ancient Greece To Understand Rise Of Athens


Not even four miles south of Athens lies Phaleron — a site unknown to most tourists. A port of Athens in classical times, Phaleron also boasts one of the largest cemeteries ever excavated in Greece, containing more than 1,500 skeletons. Dating to the 8th-5th centuries BC, Phaleron is significant for our understanding of the rise of the Greek city-state. And, in particular, for understanding the violence and subjugation that went with it. Two mass burials at Phaleron include people who were tossed face-down into a pit, their hands shackled behind their backs. To learn more about these deviant burials and their relationship to Greek state formation, an international team of archaeologists is cleaning, recording, and analyzing the Phaleron skeletons.
www.forbes.com... e-of-athens/#4aa233d33591 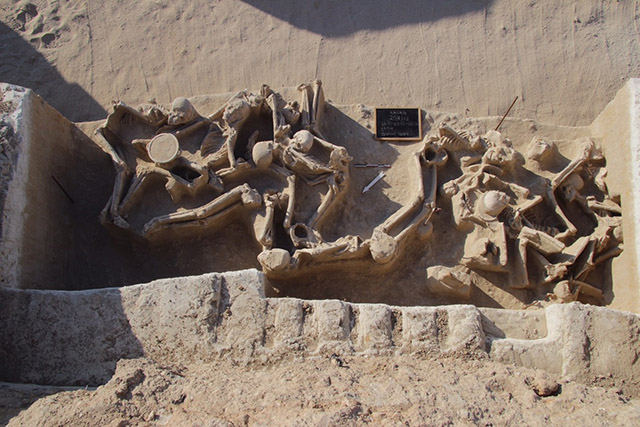 ss burial of 12 individuals with their hands tied at their backs, from 8th-5th c BC Phaleron, Greece. (Image used with kind permission of the Ephoreia of Piraeus, Western Attica, and the Islands, Ministry of Culture, Greece.)


There is significant variation in how people were buried at Phaleron. Most were interred in simple pit graves, but nearly one-third are infants and children in large jars, about 5% are cremations complete with funeral pyres, and there are a few stone-lined cist graves. One individual was even buried in a wooden boat used as a coffin – the fact that this lasted nearly three millennia shows that preservation at the site is remarkably good. The shackled skeletons, easily the most compelling remains from Phaleron, have received researchers’ attention for decades, as they are among the very few instances of shackled deaths in the ancient world and could indicate punishment, slavery, or a death sentence. But study of these “captives” has to take place within the context of the entire cemetery, and analyzing 1,500 skeletons is a massive task.


I am unclear if these folks were sacrificed or just murdered POWs but then they weren't just dumped haphazardly but buried, Athens seemed to have had a rocky start..pls klik link for much much more.

Wondering if they wanted these poor bastards to be shackled when they woke up in their afterlife?

Fascinating article Spidy! The link was broken, so here is a working one. The boat burial was intriguing as well. Thanks for sharing!

originally posted by: ReadLeader
a reply to: Spider879

Fascinating article Spidy! The link was broken, so here is a working one. The boat burial was intriguing as well. Thanks for sharing!

Thanks for the assist