Tawny Frogmouth instead of the Easter Bunny

The general plumage of the Tawny Frogmouth is silver-grey, slightly paler below, streaked and mottled with black and rufous. A second plumage phase also occurs, with birds being russet-red. The eye is yellow in both forms, and the wide, heavy bill is olive-grey to blackish. South-eastern birds are larger than birds from the north. Tawny Frogmouths are nocturnal birds (night birds). During the day, they perch on tree branches, often low down, camouflaged as part of the tree.

and yes, there it sat camouflaged into the background of the deck where we were having an easter get together. it took us for ever to spot it. someone only noticed the bird because it had quietly moved its head. a friend sat on a chair right next to it and moved quickly, thinking this is a bit eerie. 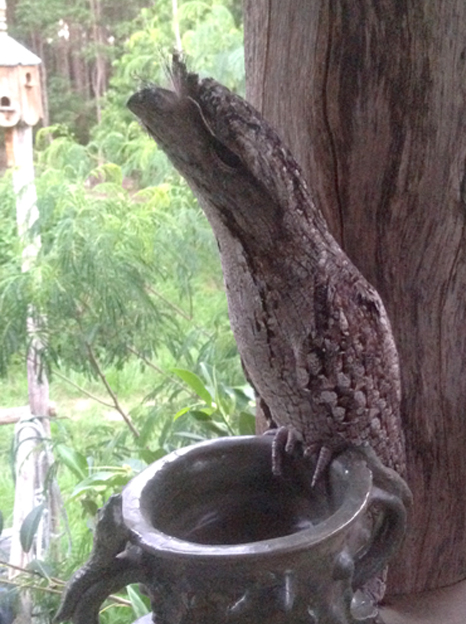 after we recovered of our initial shock and disbelieve the tawny frogmouth had its picture taken at least ten times. although we were noisy, it did not fly away until dark, probably being blind during the day.

i wish you all a beautiful holiday, relaxing days and good memories like mine

who is ur avatar, im stricken.

What a strange looking bird, looks almost like a lizard if not for the beak

i thought of it quite in a similar way. my senses would not agree to this being an owl until it moved its head and i got very close to it to see the feathers. what a peculiar bird.

We had a Froggy in our neighborhood for a couple of months last year. Haven't seen or heard it for quite a while now. We named it 'Phillip' because his call sounded exactly like a Phillip Glass piece (Specifically the opening bars of "Einstein on the Beach" ).

We never got a good look at it in the daytime, though it was probably hanging out in our maleluca for part of the time. We were able to get a spotlight on him at night when he was calling, and one night we came home late and he was on the power line where it attached to the house.

I hope it comes back, but maybe it found our local 'supermarket' wasn't up to scratch.

originally posted by: Night Star
Wow! Very cool! Where are you from? I have never seen such a bird!

birdsinbackyards.net says "With their nocturnal habit and owl-like appearance, Tawny Frogmouths are often confused with owls, but are actually more closely related to the nightjars. Their feet are weak however, and lack the curved talons of owls. Distribution: The Tawny Frogmouth is found throughout Australia, including Tasmania."

although this particular bird was seen in southeast queensland of australia