However, on the day that Shakespeare died, 400 years later, an investigation took place using a ground-penetrating radar (GPR) scan to look through the grave at Holy Trinity Church in Stratford in the first archaeological probe of the site without disturbing anything. 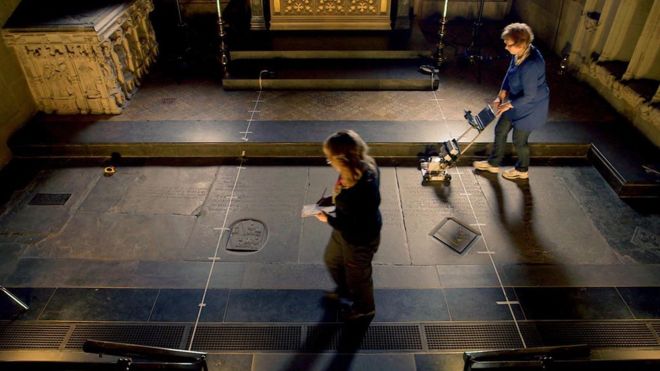 Archaeologist Kevin Colls of Staffordshire University, who carried out the project with leading geophysicist Erica Utsi, concluded: "We have Shakespeare's burial with an odd disturbance at the head end and we have a story that suggests that at some point in history someone's come in and taken the skull of Shakespeare.

"It's very, very convincing to me that his skull isn't at Holy Trinity at all."

This is what they revealed: 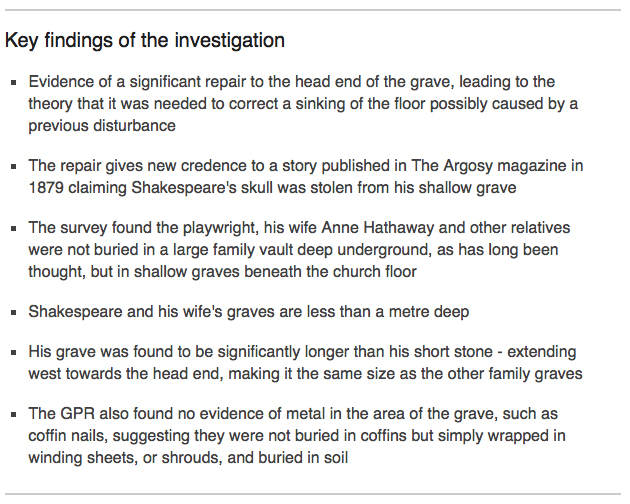 investigators went to another church, St Leonard's, in Beoley, Worcestershire, where legend has it a mysterious skull in a sealed crypt is that of Shakespeare's.

A forensic anthropological analysis revealed it to belong to an unknown woman who was in her 70s when she died.

Mr Colls said: "It was a great honour to be the first researcher to be given permission to undertake non-invasive archaeological investigations at the grave of William Shakespeare.

"With projects such as this, you never really know what you might find, and of course there are so many contradictory myths and legends about the tomb of the Bard.

"The amazing project team, using state-of-the-art equipment, has produced astonishing results which are much better than I dared hoped for, and these results will undoubtedly spark discussion, scholarly debate and controversial theories for years to come. Even now, thinking of the findings sends shivers down my spine."

The Reverend, Patrick Taylor, of Holy Trinity, said he was "not convinced that there is sufficient evidence to conclude that his skull has been taken".

"We intend to continue to respect the sanctity of his grave, in accordance with Shakespeare's wishes, and not allow it to be disturbed.

"We shall have to live with the mystery of not knowing fully what lies beneath the stone."

Upon Shakespeare's tomb, etched in stone reads: "Good friend, for Jesus' sake forbear, To dig the dust enclosed here. Blessed be the man that spares these stones, And cursed be he that moves my bones."

posted on Mar, 25 2016 @ 05:34 PM
link
Shakespear is the Banksy of the literature world. Chances are he was more than one person, but saying that i wouldn't doubt someone robbed that grave. Maybe someone should check the skull and bones building in the US.

There is to much weird s*** going on atm

You could be correct.

Back in mid-2009, researchers did the same thing and radared his grave. In that case, the findings showed three square-shaped objects that could have been books, boxes or who knows what else?

Unfortunately, it's one of those news stories that seems to have vanished or been squashed. I distinctly recall seeing the image in a news story. What might have occurred is the story was retracted to prevent the risk of mischief.

With this new story there's no mention of objects in there at all. Gotta say it's a head-scratcher.

FWIW I'm in favour of cracking that baby open whether WIll's curse remains or not.