posted on Mar, 24 2016 @ 03:19 AM
link
In some ways I am surprised this has not been more fully developed before now ... I suppose it has always been about the power supply, mission parameters and not wanting to lose the submersible ? At 50 tons this new Voyager which the article says is rated down to 11,000 ft should be an asset for those wanting to know more about our oceans. If this thing works as advertised no telling what some future develops might be.

The Echo Voyager can spend six months at a time exploring the deep sea, with a 7,500-mile range, no ship needed. Structurally, the 51-foot Voyager’s not too different from its little brothers, the 32-foot Seeker and 18-foot Ranger. The big difference is the introduction of the hybrid rechargeable power system.

posted on Mar, 24 2016 @ 03:45 AM
link
First, off topic...imagine my disappointment when I clicked this thread only to realize it didn't say "Boeing's Monstrous UNDERWEAR Robot." I was so curious.

Anyway, on topic...I almost wish we couldn't explore the oceans. We tend to destroy everything in our path. It is hard to see any long term positives, but I'm in a cynical mood towards humans lately.

The Echo Voyager can spend six months at a time exploring the deep sea, with a 7,500-mile range, no ship needed.

And who would have thought

The Voyager works like a Chevy Volt, if the Volt carried a thousand gallons of fuel and could drive from San Francisco to Hong Kong without hitting a gas station. (The Volt is more fuel efficient, though—battling water resistance, the Voyager goes just 7.5 miles per gallon.)

Thanks again for sharing Sky!!!!!


Ontopic. . This could be the first scout that can search for so called speculative underwater bases that seems to be out there ..

This is incredibly cool. Why it has taken us this long, I don't know. I haven't researched the topic to be honest, but appreciate that every effort is now being put into understanding our oceans.

originally posted by: angryhulk
a reply to: 727Sky

This is incredibly cool. Why it has taken us this long, I don't know. I haven't researched the topic to be honest, but appreciate that every effort is now being put into understanding our oceans.

If any of the rumors about the Pacific dying are true (radiation) it might be a little late, No? hahaha derail my own thread !

An attempt to learn about what is going on in our oceans. Curiousity for a world mostly unknown...If I am correct, we know more about Mars and the Moon than what is playing down deep in the ocean.

Ayways.. I thought many would appreciate what we are talking about... 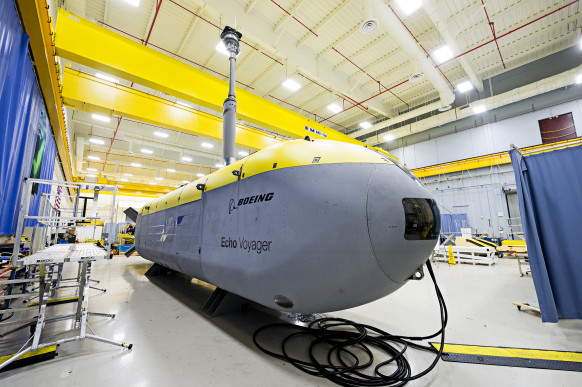 posted on Apr, 5 2016 @ 12:01 PM
link
Make sure to white list Wired on any ad blocking software you have installed so you can read the article.

Consider. What issues might a military version of this have? And no doubt, you should consider this as the happy, jolly, candy-like civilian version of, say, an underwater wingman system.

If you had some of these scattered around places you might want to engage in underwater combat, they could come in really handy as a battle adjunct to a combat sub. They could also do autonomous interdiction of areas of ocean you don't want people in. They could keep surface ships away as well, or do flocking attacks on surface ships in groups or singly.

Since you don't have to have people inside, you can make them durable, fast, capable of deeper dives, small, less of a sonar profile. And you don't care quite so much about losing them, so you can use them for active decoys, if needed.

But, wait! If they have to surface to recharge, that's going to be a mess, right? Worry no more! Autonomous 'helper' subs use a seldom mentioned yet off-the-internal-shelf technology. Instead of surfacing and lying there for a bit while it recharges, you can instead tank liquid oxygen, diesel, and 'burn' them in an ultra-quiet Stirling cycle generator even if you're underwater. A bit of chicanery allows you to just dissolve the exhaust into the seawater, not leaving so much as a bubble field to mark your passage.

And the little auto subs can dock with autonomous refueling tankers, like a Roomba with torpedoes.