page: 1
34
log in
join
share:
nito92
+18 more
posted on Mar, 23 2016 @ 05:54 PM
link
Hello ATS, here is another interesting case which has little information in here. I will be translating it all from a Spanish source that will be at the end as always.

This case occurred on August 28, 1963, in the neighborhood Sagrada Familia, Belo Horizonte, Minas Gerais, Brazil, the case was investigated by the Brazilian UFO group CICOANI.

The three boys, Fernando, Ronaldo and José Marcos went to their backyard after dinner to clean the coffee strainer in a water tank (it was previously a metal barrel of gasoline), next to the tank, José, the youngest of them, seven years old at the time, went quickly to the water tank, lowered his head and arms inside the barrel to collect the water with a bottle in his hand. 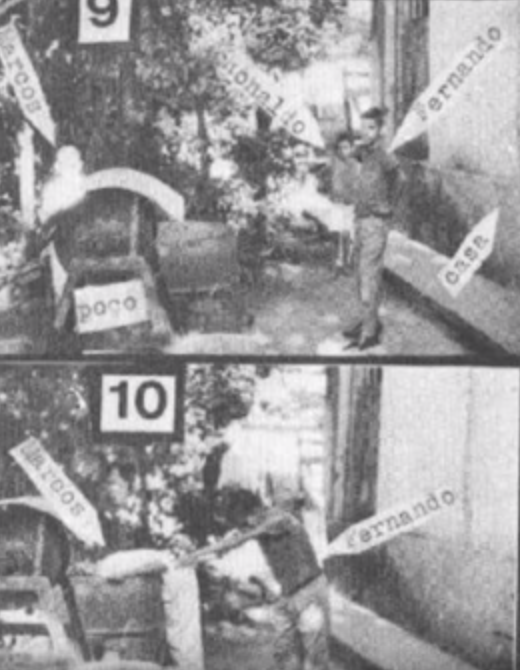 Then Ronaldo came and suddenly noticed a strange glow in their backyard. Looking up to see what might be causing this unusual clarity, he saw a spherical UFO. The UFO was lit internally and its walls were transparent. The UFO was stationary and floating on an avocado tree. The distance to the boys was about 8 meters. Its size was estimated at around 3 meters in diameter. At the top of the UFO was a sort of an antenna with two branches bent in the form of a V. Each being had a ball at the top of their heads. In the middle of the UFO there was other smaller vertical antenna.

Because of its transparency, the four beings were visible, four beings that were absolutely like us, except for a curious detail, instead of having two eyes, they had one eye in the middle of the forehead, like a cyclop. At least one of them was a woman, because unlike the other three who had no hair, this being had long blond hair. All the beings were sitting on stools. In front of the front seat there was a console that appeared to be the control panel of the UFO. 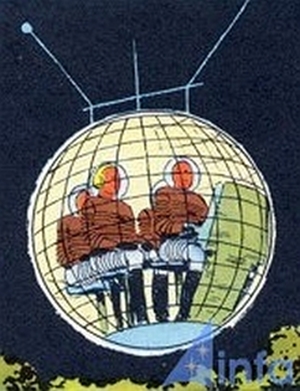 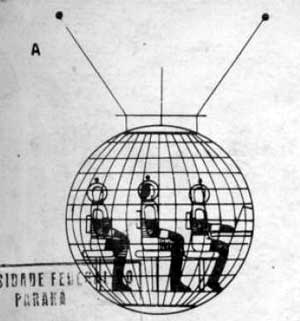 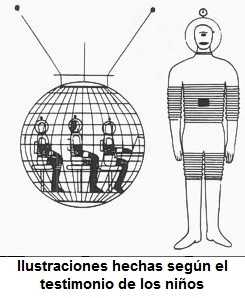 - The four beings and the UFO.

A few seconds later, the UFO shot down two beams of light, forming two columns of light. Between these two light beams a being descended from the UFO, slowly floating down. The being started walking toward the water tank where José stood his head inside the barrel to get water. Apparently, José was not aware of what was happening. When the being was at a distance of about two meters from José, he extended his arm making it clear that his intentions were at least to touch him. But Fernando thought the being wanted to kidnap or hurt José. 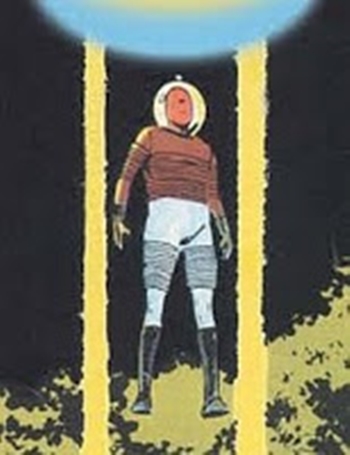 - The being descending from the UFO. 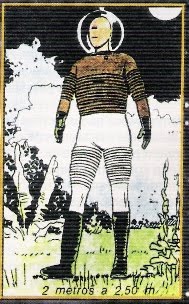 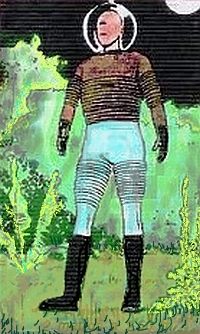 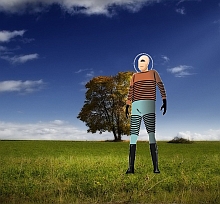 Without hesitation, Fernando ran and jumped on José, knocking him to the ground and placing José behind him, the strange being instantly retired and made a series of gestures to Fernando with his hands, which were accompanied by movements of his head. The being began to speak several completely unintelligible words. Then the being sat on the edge of a pit that was in front of the UFO, which remained hovering low to the ground.

When this being turned his back, Fernando grabbed a brick from the floor and raised his arm to throw it to the being, but, immediately, the being got up and shot out a yellow ray from a small rectangle that was in the chest area of ??his clothes and went to the hand that was holding the brick. The brick fell to the ground and inexplicably the three boys were quiet and totally calm instead of running and screaming for help. 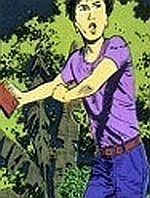 - Fernando holding a brick to throw it against the being. 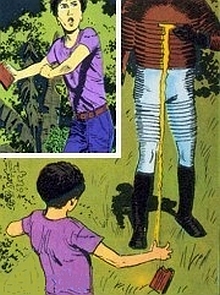 - The yellow ray that stopped Fernando.

The being remained there in front of the three boys, talking endlessly in a totally incomprehensible language. And it was at this time that the boys could see well the creature. It was more than two meters in height and had one big eye in the middle of the forehead. His eye was dark, without sclera and placed on the base of the nose. On the eye there was a stain that looked like his eyebrow. His face was completely red. It was possible to see some teeth when the being opened his mouth to speak. 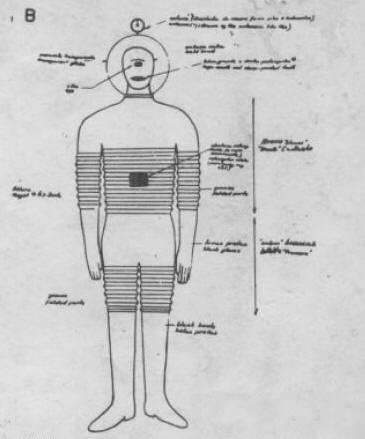 - Description of the being.

He wore a transparent helmet where his face was clearly visible. The clothes that the being was using were brown to the waist, white to the knees and the boots were black. His clothes appeared to be made of leather or something similar and had several wrinkles. The boys said the being had some kind of box of a color similar to copper placed on his back.

A little later, the being nodded slowly raising his hand and pointed to the moon, as if indicating that he was about to take a trip to our natural satellite. Shortly after the being walked toward the UFO. When José saw that he walked away, he asked, "Will you come back?" Surprisingly, the being turned around and gestured shaking his head up and down, as if responding to what the boy had asked. Then right away, he turned around again and continued walking toward the UFO. But before he got to the UFO, the being bent down and picked a plant from the ground with his left hand.

When the being finally reached the exact spot to where he descended from the UFO, he waved his hand and then the yellow light beams columns appeared again and then he started floating slowly up toward the UFO. Once inside the UFO, the being sat down with the others. Finally the UFO issued a glow and flew silently toward the east, fading and then disappearing. 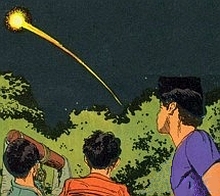 - The UFO disappearing from the boys sight.

Only after the UFO disappeared the boys ran into their house screaming and calling their mother. Maria José was scared by the appearance of their terrified children and sent her daughter to a nearby bar to get her husband, Alcides Gualberto. He came immediately to see what had happened, Alcides Gualberto found that there were small triangle-shaped markings on the floor of the backyard just like their children told them. The children were very frightened and refused to return to their backyard for several days. 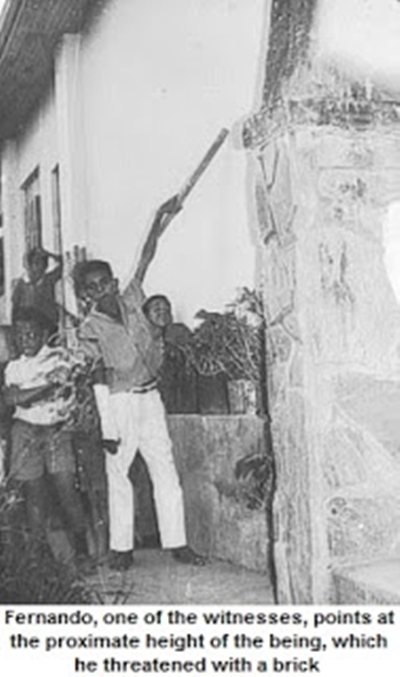 - Fernando points at the proximate height of the being.


I like the part where the being nods and points at the moon.. Then as he walks away one of them ask if he will return. He turns indicates he will and walks of into the sunset or rather his beam of light picking up a plant on his way..
And all this happened after one of them threw a brick at him.. Lol..
edit on 23/3/16 by Misterlondon because: (no reason given)

Thank you friend and is my pleasure to do so, its just a little effort, the credit is to all those which recorded all these cases. Yeah me too, but, I find more interesting why the being kept talking all that knowing the kids didnt understand a thing (or maybe they did? in their subconscious mind) and of course, what was he saying?

posted on Mar, 24 2016 @ 09:24 AM
link
What an interesting story. I wonder if anyone ever thought to find those boys, and ask if the beings ever did return?

Never heard of this case before so thanks for sharing.

I only know that Cyclops have been recorded before in history so it`s kind of a dillema for me. Did they make up this story based on historical recordings or were these aliens here before? It certainly is a detailed description of beings and their vessel but kids do have a great imagination

Thanks again nito. The effort put into the presentation and write up is what sets your posts apart from most.

I enjoyed the story even if it could all be from the furtive imaginations of 3 young boys.

I agree, a part of me wants to believe its all real (I cant deny that) and thank you!

Does anyone think the crafts strange design might symbolize something? I kind of liked Eric Ouellet 's school of thought looking at UFO and visitations as psi phenomena.


"There was something in the air that night, the sky so bright Fernando".

Sorry I couldn't help it. Interesting story for sure.

I wonder with the name....if it has anything to do with the church in Spain....Had never heard of this story but I do agree with you, we brick em and they just nod their heads....lol silly hoomans maybe?