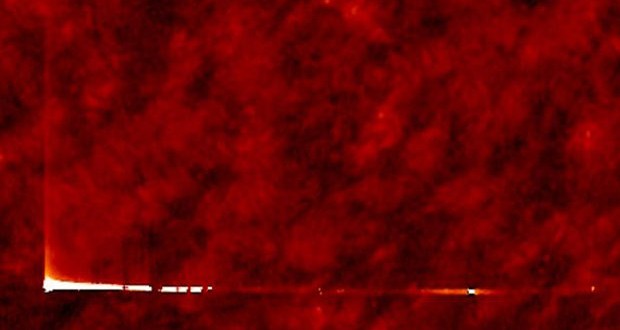 UFO hunters believe they’ve spotted an “alien megastructure” in a NASA image, which they claim proves the sun is hollow.

The picture, captured by Nasa’s Solar and Heliospheric Observatory (SOHO) satellite, has sent conspiracy theorists, who believe the Sun is hosting an “alien world,” into a frenzy.

Some have suggested that it means that aliens are using our host star to harbour energy, much like the alleged Dyson Sphere which has been theorised to surround a distant star known as KIC 8462852 – or more colloquially Tabby’s Star – which was emitting light that was regularly dipping in brightness.

Scott C Waring, a major player in the field of UFO hunting, wrote on his blog: “A giant door opened up on the sun this week, just a little bit, but enough to make a crack across the sun and through the crack shined pure white light of the world inside.

“It opened up just enough to allow motherships to exit or enter.”


I love seeing the endless mind wander into the realm of alien existence from within the sun...and also the notion that the sun is an energy source for gateways between alien life and ours.

The theory that this event captured on SOHO's camera makes me ask....is this a glitch in the system, or is this triangular shape spotted over the sun real? And those "objects" within the open slip actual motherships?

Kind of scary to think this would be a stargate for alien ships to cross over, but I wouldn't want to object to the idea. There have been a lot of strange phenomena happening around the sun for years, so I would definitely keep an open mind about it.
edit on 21-3-2016 by Skywatcher2011 because: (no reason given)

posted on Mar, 21 2016 @ 11:57 AM
link
Some theories I find have rational thought behind them and therefore could be true, then of course there are other theories, this is hilariously brilliant

Seriously, while I'm not an expert in image analysis who can tell you what would cause this image to look this way (which looks to me like some sort of image artifact), I really can't figure out how someone could jump to the conclusion that it is an “alien megastructure”.

I don't know much about cameras and possible glitches/artefacts, but what you can see in the video and picture does look like some kind of error with that line of Pixels.

If you look closely in 1 of the images (pause video at 00:11), you can see the white line (that they're saying is a crack in the door) clearly protrudes beyond the edge of the suns circumference (im sure theres a better word for this, but my knowledge in this area is pretty limited).
edit on 21-3-2016 by AbdulAlhazred because: add the video time

Um. A bad line of pixels on the photo?

But no... HAS to be "hollow sun with alien world inside and motherships!!"

Whenever I see these kinds of pictures I also look for technology error or glitches..because technology can produce images likes these with screwed up pixels.

Secondly, the theory is crazy and not enough hardcore evidence to prove alien existence....so once again, just a crazy imagination!

posted on Mar, 21 2016 @ 12:05 PM
link
well i'm afraid this is nonsense. i used to dwell on these various imaging artifacts/cosmic ray strikes/planets in the image for hours, and myself imagined (at first) all kinds of alien type explanations. i do so no longer.

Conspiracy theorists are always getting in a "frenzy" apparently.

posted on Mar, 21 2016 @ 12:13 PM
link
The point of drawing up a thread like this, and not just because it has been REALLY slow for UFO conspiracy, is because I wanted to get ATS thinking about what is actually happening in outer space and whether or not UFO's and space portals exist. Sure it is the sun in this case, whether imagined or not, but at the end of the day, whether it is nonsense or not, strange things happen and they cannot always be explained (unless you are a true professional in the field of this kind of exploration)

posted on Mar, 21 2016 @ 12:15 PM
link
I suspect these ideas would have William of Ockham pulling his hair out if he were alive today. Or he might just beat his head against a wall. Certain facepalm though.

originally posted by: RoScoLaz4
a reply to: Skywatcher2011

it happens even with the best of us...apology welcome

It's just an artifact isn't it ?

Although it reminds of a waveform in Audacity

posted on Mar, 21 2016 @ 12:46 PM
link
This is almost as good as the idea that there's a planet who long elliptical orbit takes it out of our solar system for 3000+ years into freezing space but live could evolve on it and they seeded earth.

originally posted by: CraftBuilder
Earth is doomed...not because of aliens, but because people are so hopelessly ignorant.

Yeah right...until you realise this has ALWAYS been the case with Humanity.

posted on Mar, 21 2016 @ 01:37 PM
link
This made me think of the other way out there theory that everything we know is wrong. Every now & then the sun actually births(spews) out new planets in some sort of God rage, & every current planet is pushed outwards into new orbit. So every planet eventually hits the Goldilocks zone for a period of time

Here was the first thread that popped up on it.

Scott C Waring.
We really should stop encouraging him.