I like an attack ad as much as the next guy (as long as the next guy is fed up with Canadian politics taking cues from American politics and prefers platform-based campaigns)... But to me, this ad seems like if it achieved it's goal, Trump would easily win against a fractured opposition.

Seriously, the best direction you can give is to "Vote against Donald Trump"?

How about if you give people an alternative?

Democracy, for all that it is better than all the other options I can come up with on short notice, is a state of affairs in which the people are FOOLED into believing they have any power of any kind. They do not, because they have no control over whether or not their views are represented by at least one of the available candidates for a given position.

It is a simple and subtle distinction, but an important one. As long as voters have to compromise, the only result possible is always going to be utterly unacceptable, and they will always have to compromise, as long as candidates cannot be found who exemplify the wishes of the electorate. Tis certain that most politicians are more interested in their obligations to the powerful, than they are in their ability to improve things for the powerless.

posted on Mar, 15 2016 @ 08:19 AM
link
a reply to: CrikeyMagnet
The main reason I would vote for Trump is because the press, The republicans, the democrats, the welfare queens and kings, the countries which have been draining us dry for no telling how many years plus the stopping of 300,000 Muslim refugees , all hate him not to mention those who hold the oligarchy dear.. Any candidate that has stirred this much crap has got to be something to behold and is probably better than anything we have had in a long time.!

I have come to the same conclusion. After years of deception, the only way to really vote for change is to vote for who scares those in power. I am not saying it will work, but we can't keep doing that which has brought us to this point and expect change.

originally posted by: 727Sky
a reply to: CrikeyMagnet
The main reason I would vote for Trump is because the press, The republicans, the democrats, the welfare queens and kings, the countries which have been draining us dry for no telling how many years plus the stopping of 300,000 Muslim refugees , all hate him not to mention those who hold the oligarchy dear.. Any candidate that has stirred this much crap has got to be something to behold and is probably better than anything we have had in a long time.!


Or everybody hates him because he's so damned easy to hate. Maybe it's more of a "1.5 billion interested parties can't be wrong" situation.

We'll only really know when we know. I'd just like to suggest that a vague urging to "Vote Against" a candidate, even if completely successful, is likely to just make that candidate your president, since the percentage that could have defeated him would likely be split between whoever else was available.

Vote FOR the option that sux less

originally posted by: CrikeyMagnet
How about if you give people an alternative?

This one trillion percent! Give me a better option than a screaming mad man and I'll consider not voting for him.

This is why I actually like Australia's way of voting (at least, the method of voting that I learned about in my statistics class back in the mid-2000s). You would list all of the candidates in order of preference, and as the election office counts the votes, the lowest-scoring candidate gets removed, then they recount, and that keeps happening until there is a winner. At least in this way, everyone's vote actually counts (multiple times, actually) until there is a winner.

At least, that's how I understand it. In this method of vote counting, it removes the need for primaries (in theory), and you could have two or three candidates that you actually like on the ballot for whom you could vote.

Hopefully I have that system correct in my head and I'm not missing something about it.

It does, however, seem like there could be a lot of contesting of the vote count, since it happens so many different times, and could also open itself up to possibly fraud/incompetence due to the number of times being counted, but at least the way it is counted allows for everyone to be voting FOR something, and for that "for vote" to be counted somewhere.

Hopefully if I'm wrong, someone can clarify.

To keep two socialists out of power.

The only difference between what they say is their word choices. That mean the SAME things.

Trump isn't my first choice, or second or third or fourth.

Hell people there are NO real choices either right or left this time.

If this is the 'best' America has got to offer.

hmm...so, I guess you are satisfied with having both houses of congress, and 31 state governors republican controlled. apparently that majority part of our government is just peachy keen......it's the POTUS that is not a republican, that will bring down the union....right....got it.

The problem arises when there is nothing... or, in this instance, anyone to vote for.

Come November, we'll have a ballot like never seen before regardless of who takes their parties. More to the point, neither party has done a thing... NOT a single thing to try and hold fast to ideals and loyalty to the US Constitution.

It's scary as hell... but something that is purposely being installed for a single purpose.

It's now just a matter of time.

Here's some humorous graphics which explain about Australia's preferential voting: 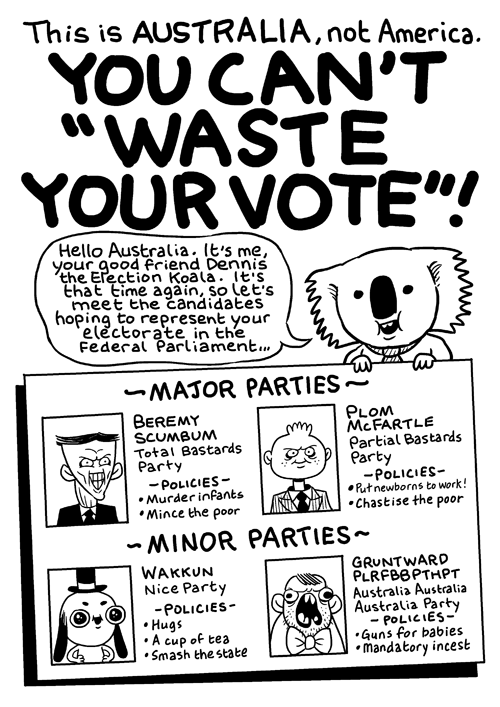 That may be true for voting at the federal presidential level but it's absolutely wrong at the local level. Depending on the county or State, any citizen over 25 years old and with a certain number of years of residency can run for local office. This leads to most local and State elections having a large amount of random people running for those positions.

And every single vote is important at the local level, with some elections being decided by dozens of votes or fewer. Voters aren't required to select a candidate from the major political parties. So if people only vote for candidates that don't represent their views, that's on them. You can't blame "democracy" for that.

Thanks...pictures make explaining so much easier

At least I had the gist of it correct.

originally posted by: Sillyolme
Wasn't it Saint Mother Theresa who said she wouldn't attend an anti war really. She said when you're having a peace rally call me. 🐝

Why not? She lived in the 20th and 21st century. She probably had indoor plumbing too. When she wasn't in some poor village doing ministry work.