The Michigan Dogman & the Onaway photos

posted on Mar, 12 2016 @ 12:11 PM
link
On a recent Coast-To-Coast radio show, George Noory said he'd heard that "dogman" sightings were on the rise. In a New Mexico sighting, the witness described a creature that looked exactly, spot-on like The Egyptian deity Anubis, which he had seen in a history book.

I did some searching and found this. I had heard of the Onaway, Michigan sightings, but hadn't seen this video.
Real or hoax, I think it's a cool photo. The creature looks both canine and bear-like. A composite.

The documentary claims that film and photo experts Terry Pressman and Jordan Anderson analyzed the images. Anderson said there is some evidence of manipulation in the form of brush strokes in the image. Pressman believes the image to be genuine, and can find no evidence of any trickery.
He explained that what Anderson saw as brush strokes are actually motion blur from the creatures moving arms. 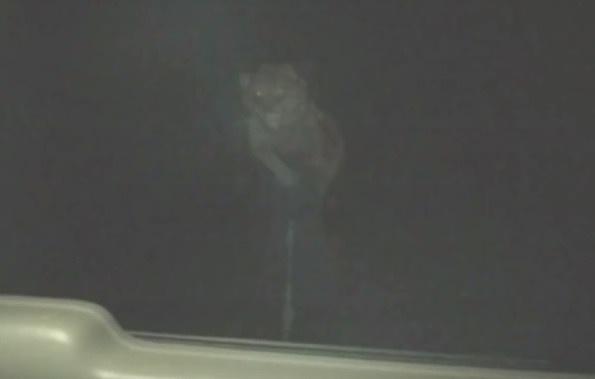 Terry Pressman used this composite image in an attemp to find evidence of manipulation. 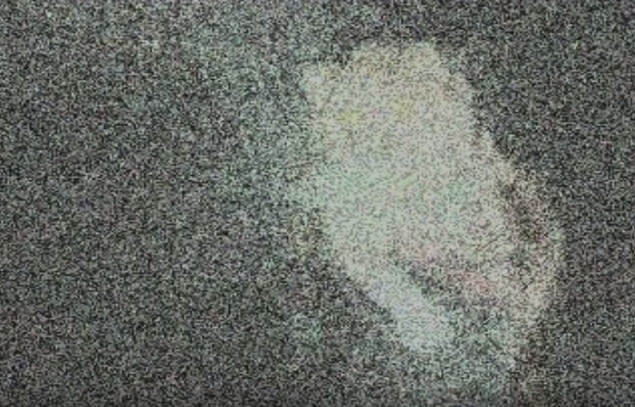 The Ohio Grassman and other canine cryptids hold a special fascination for me, and usually look forward to guests on C2C that discuss the topic. There is one guest, a woman who has done much research into Dogmen and similar subjects, that I especially look forward to listening to. I will post a link when I can locate her old shows.

The topic isn't discussed much, and appreciate you starting a thread on the topic.

posted on Mar, 12 2016 @ 12:49 PM
link
a reply to: Boscowashisnamo
The womans name you are thinking of is Linda Godfrey. She is a frequent guest on many radio shows including C2C. She has written a few books on the subject of the Dogman and to hear her say it, has no concrete theory on as to what they might be. She is an excellent writer.
Wherewolves? Version of Bigfoot? Who knows, but I do enjoy the mystery.

I find it very interesting although I'm not sure what to make of it.

YouTube has a good channel call Dogman Encounters Radio if you find the subject interesting,check it out.

posted on Mar, 12 2016 @ 02:29 PM
link
I found this image on the net some time ago. Never knew the story around it thought. Every time I looked at the image, I got this weird feeling that the creature looked terrifyingly real.

There is a weird case in one of David Paulides books about a kid that went missing and was found. The kid told the police that a big dog kept it warm and fed. In another case a kid claimed a big dog had eaten it´s hat! Gotta ask yourself what is going on in the woods.
edit on 12-3-2016 by hesse because: (no reason given)

Honestly the first picture looks like a taxidermy wolf in an upright position on some sort of stand you can't see. The shoulders aren't humanoid at all but very canine/lupine and the forelegs are short and not like humanoid arms at all.

posted on Mar, 12 2016 @ 08:10 PM
link
Good topic. Looks like it could be a big cat even in running position because how is it even propped up as it appears.

posted on Mar, 13 2016 @ 05:24 AM
link
Linda Godfrey has spoken about her work documenting the dogman phenomenon on a variety of alternative radio shows and podcasts. In addition to the ones mentioned above, she spoke with the Expanded Perspectives podcast in January 2015:

If you're into cryptozoology and other alternative/less mainstream topics, Expanded Perspectives is well worth check out if you have not already done so.

I'm originally from Wisconsin, not too far from the area where Linda documented the dogman sightings. After reading about the Beast of Bray Road, I drove down to check the area out. Not particularly creepy, as old country roads go, nor did I see anything unusual there. An interesting story none the less.

I agree. That may well be the most probable explanation.

I regularly listen to that,fascinating stuff.And i wonder if in some Missing411 cases these dogmen were the culprits.One of the cases involved a little girl who was luckily found again -she told of being with a "wolf" that ate her hat-but gave her berries to eat so she wouldn't be too hungry.I do think they are an undiscovered species.

posted on Apr, 21 2016 @ 02:03 PM
link
Ok hold up. Which Dingman are we talking about here? There's reports of the Bray Road Beast which is pretty much a stereotypical werewolf. Then Theres another type. The Anubis looking ones. Like why a mans body. If heard people have seen them walking along roads and when there spotted they bolt. These ones are extremely difficult to find any useful information on. Because everything you type in Michigan Dogman it only comes up with Bray Road.

originally posted by: dreamingawake
Good topic. Looks like it could be a big cat even in running position because how is it even propped up as it appears. 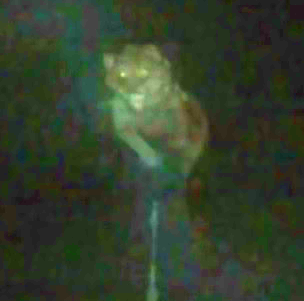 It certainly looks like a cougar face to me. Seen them in Idaho and seen them here in SW Michigan! I can only see feline characteristics, no canine here. Better to call it CatWoman sighting, perhaps?

eta: on second and third look, I agree with BlueShift, it's a cougar or mountain lion on a tree stump.
edit on 21-4-2016 by Bedlam because: (no reason given)

posted on Apr, 25 2016 @ 04:16 PM
link
I'm going to have to agree with everyone saying that this looks like a big cat, maybe not a cougar, maybe a young lion or tiger that made it to the wild but the shape of the head is very cat like to me. It is mid pounce I believe and that is why it appears to be bipedal.
edit on 25-4-2016 by FairyThorne because: Adding information

posted on Jun, 16 2016 @ 01:08 PM
link
Is the creature being looked at through a sunroof? if it's a big cat/wolf/whatever in a tree or elevated looking down, that could be the reason that the beastie looks like it's standing up, when in fact we're just seeing the whole body in an elevated position. Just a thought.


originally posted by: dreamingawake
Good topic. Looks like it could be a big cat even in running position because how is it even propped up as it appears.

Certainly not any kind of "dog" or "man."


The Trend of the 2008 Presidential Election, and a series of other events..."Smokey the Bear". (Which follows certain States with larger than typical groupings of certain population segments, draw your own conclusions).


There's a series of laws that prohibit giving a Beast authority over a Man, or making Man suffering because of a Beast. Beasts are not to have civil or religious authorities over man. According to the degree and disbursement of the population, you will not find this kind of situation globally anywhere, except in the USA. "Lives Don't Matter Promoting Suicide by Cop", "Suicide by Antichrist", extreme acceleration in birth rates and murders among certain races of the population, as their lives come to a close. These are all thing we need to think about (After the Serial Killings in 2014 in the Picnic Killings in the City of Philadelphia, I believe soon we'll unify the media and the authorities in an assisted suicide program....the level of force used against me tonight in our nightly walk, was not good enough to convince me enough lethal force will be used against me on friday, so we'll need to do this again soon for public safety....they will take their lives naturally, and solicit their own suicide from the media and the authorities, you will no choice but to do that soon....right now, I shouldn't have to use much energy to solicit their suicide as I've demonstrated already to the media and the police departments locally in preparation. That is one viable possibility, until we reach the next level soon....using very little energy to solicit their suicide of these races, I will demonstrate abroad what needs to happen, then the people will suffer very painfully until they handle this problem as I've demonstrated by the action of God performing the euthanasia as an example....Its no to late, to accept my authority, and prepare the media and the authorities to do whats necessary now, or, depending on what happens, you will just have to shot these people in the head or get rid of them quickly, because you have not used the solution I am providing at this level (death only for these races, and they can do little against me, in terms of suffering and pain before their lives come to a close, either show this to the media and the authorities, and don't shy away, or there will be great turmoil in the next level soon, your choice, as I've stated I will only use a little energy to solicit the suicide of these people).(In full view of international News Media, when these races drop dead before me, I will reach down and pet them on the head, and then I will tell the media and the authorities to shoot them in the head, as God had illustrated with the previous son of man, we've discussed, by the end of this month there should be a demonstration of euthanasia, so we'll see what happens if we are correct on a few points, already done, from this point on you will challenge these people directly to take their lives by using force against me, so I can break their spirit to kill anything more than the ra*es and peoples, I've decided, then maybe depending on how many of these people die quickly based on the force they use against me, I can accelerate their euthanasia with suicide and resurrection, as I decide if these people need to die quicker, as I've illustrated back in 9/11/2013, just once so far).
edit on 5-7-2016 by jigglypuff because: (no reason given)

posted on Jul, 5 2016 @ 02:44 AM
link
The teeth are nothing like a cougar's teeth. Head also different.
IT doesn't look like any earthly species of anything common here.