posted on Mar, 9 2016 @ 08:47 AM
link
Came across this article by Rolling Stone Magazine and while reading couldn't help wondering how all this fracking activity is going to be disruptive to incidences of high strangeness in the Uintah Basin? Another question I had was all this new development intentional to either put a damper on the activity or worst normalize it with all the new human activity there?

Yeah, I don't really expect answers but it's something new for my brain to chew on.

before I go too much further let me link some information.

Now I'm not going to debate fracking since that pretty much is the realm of the Fragile Earth Forum. My interest lies more in the incidences of high strangeness reported by the Ute and Navaho peoples along with the Skinwalker information and the new human disruption's interference or agitation of the phenomena. Since I'm playing connect-a-dot today Farmington NM isn't that far away and I can see this having repercussions for JC Johnson's research as well as Bigelow"s.

Here is a link to a movie-short made giving you all a visual of what the basin currently looks like each section is it's own little story so it's NOT like I'm asking peeps to watch a youtube.

Another question is with incidences of the toxic fumes in the basin spiking in different locations, are some of the reports we've received accountable to that?

Honestly I had no idea the valley was this ripped with fracking and myself, I would have questioned some of the reports of high strangeness with this in mind. Not saying the place isn't Ju-Ju central, it's just like with most things there isn't alway's clear cut causation for events. Now before I get a spanking for an incendiary thread title, the RollingStone article was included here to provide background information on the increasing toxicity of the area in general.

Call me crazy but by now I would have expected MORE reports of high strangeness since the place is rife with oil workers from around the world converging on it, building roads, building infrastructure. But I haven't seen a massive spike in reports on the internet, yet.
So what gives?

Hope some of you find this a curious as I do?
Thanks for reading!

posted on Mar, 9 2016 @ 09:12 AM
link
Links to older discussions of Skinwalker and More High Strangeness for those needing to get up to speed.

Here's a map of the area.

We need to leave Gaia's energy to Her to use. Tinkering with it leads to nothing good. That being said, if the energies at that ranch were to be harnessed and taken to Cern....that would be its own series on HBO.

posted on Mar, 9 2016 @ 11:04 AM
link
Fracking will destroy the aquifers that supply water to the people of many states....its like nuclear energy...its a literal dead end for humanity....
Regards the skinwalker....the place has been done to death already by Bigelows boys....I doubt if anything new will occur there again now....
edit on 9-3-2016 by bandersnatch because: (no reason given)

He is our Skinwalker Ranch pro.

posted on Mar, 9 2016 @ 11:11 AM
link
It seems the fracking killing folks and the thugs hired by the mutha frackers, and thus contributing to the demise of life on this planet, is the lead story here.

I mean, I love me the high strangeness, and who knows, perhaps it's linked to dying nature spirits or something, but it's clear where one's attention should be drawn.

How to stop this 'death for a dollar' ride we're all on is the BIG question... cheap gas is nice, until it isn't .

posted on Mar, 9 2016 @ 11:57 AM
link
This is an interesting thread, and a topic that I didn't know much about. Thanks for sharing, I need some time to digest

Awesomesauce!
The scientists get a dose of "what was THAT??!!" and they have enough equipment on hand to measure it!!
BRILLIANT!!

Like I said the environmental aspects are best left to the Fragile Earth Forum. However Skinwalker Ranch is but one place in the entire basin and the weirdness isn't isolated to it. Looking at the map I suspicion that other weird valley in Colorado is within the area's boundary?

I've been searching for reports from other are'a within the basin and shamefully my Google-Fu is lacking today. Not giving up tho!!

I really thought you'd jump on the concept of the govt selling out the valley to delegate dealing with the Oddness since it seems pretty uncontainable.

Anyone feel free to run with the articles and post over in the Medical forum or Fragile Earth, those articles go a couple of different ways. Heck I could have even connected it to the Flint debacle! However my two remaining brain cells went right to WOW! How's this going to affect the Weird?

No accounting for taste? huh?

originally posted by: charolais
This is an interesting thread, and a topic that I didn't know much about. Thanks for sharing, I need some time to digest

Apologies it's an older article, but I hadn't heard peep-squeek about any of it. That alone is curious with all the drama about federal lands being closed to rockhounds, the Bundy/Oregon thing, Navaho uranium mining, plus I was surprised this got under everyone radar that such a huge chunk of real estate is now been literally leased out right under our noses.

I feel somewhat played and misdirected.

This could spiral out into a multitude of topics and relevant issues/conspiracies.

In my CernHBO series, I insist your "awesomesauce" be blood red!

ugh I went to a "behavioral modification camp" whose office was located in Vernal... but us "patients" we held on the mountains between utah and colorado, 50-80 miles from the closest town with no electricity, water, identification etc. It was a f*cked up program run by ex military people who got off on the power trip,

and to finish, me and my mom joke to this day about how "Vernal" sounds like an STD and the town is f*cked so I pretty much curse that place lol

skinwalker ranch is close by? yikes, no wonder I had nightmares everynight on those mountains

The ranch is southwest of Vernal and not super close, however the whole basin has had para reports over the years, not isolated to the Ranch itself. Found this odd picture of supposed magnetic anomalies, if I'm figuring this correctly the blue area's are the weird spots? To me this looks more like a normal thermal image and like you'd expect the valleys pop blue, since cold air sinks. 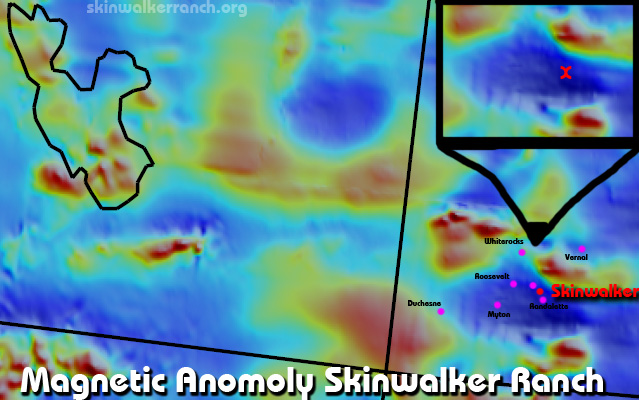 The map above displays the geo-magnetic anomaly surrounding Skinwalker Ranch and the entire Uintah Basin.
www.skinwalkerranch.org...

Since the whole area has had strange reports, just focusing on Skinwalker seems too limiting.

posted on Mar, 10 2016 @ 05:58 AM
link
A little off topic here, but JMO needs said. A few years ago I ran across this video from JC Johnson where he interviews Leonard Dan regarding the Skinwalkers. Very matter of factly it's explained Skinwalkers used to work for the indigenous peoples as a type of Medicine Society to gain information during the time the Conquistadors were hunting gold and taking their people as slaves for the mines down south in current day Mexico. Later again when the US was in it's process of Native removal.

More recently by his description the Society has taken a darker turn.

Right there...most questions I had about them were resolved. I would encourage you all to hear this man out. Western society has built this into something it isn't. Other things are clearly going on out there in the high desert at night, but this part has been answered.

I'm not a huge fan of having to listen to videos for info either, so my apologies. I couldn't find a transcript of the interview for you to read.

If someone knows how to imbed this I'd greatly appreciate it!