Yes I may have a passing familiarity with how the delegate system works. Thanks. I'm not at all concerned. Excited as hell certainly. I've never had so much fun during a primary. 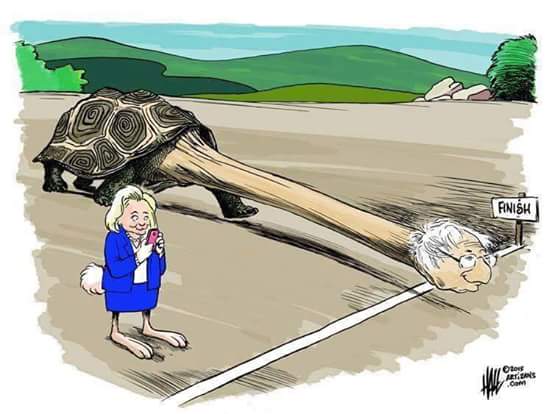 People need to turn off the MSM.

Yes! I wish they would also quit talking about those superdelegates as if they were a done deal. They are NOT. They weren't a done deal when most of them supported Hillary at the beginning of the 2008 election, and they're not a done deal now.

I wouldn't be celebrating just yet. He and his fans better forget about Trump for now, because the DNC , Hillary and her lobbyist she only takes money from are going to slime their way to the nomination.

I only say this because I really don't want to get behind Trump when the DNC elects Hillary. Hillary should be the only target for Bernie and his Fans. I see lots of Bernie fans attacking Trump when they should be attacking Hillary.

What I hate is that on the MSM news outlets, they are lumping in the 300 or so "super delegates" that claim to support Clinton. They said "support" -- they haven't signed anything binding that says they will VOTE for Clinton.

If Sanders wins more regular delegates among the states -- the supers will switch to support him...especially if its looking like Trump will be the GOP nomination. In a Trump/Sanders election, Sanders does much, MUCH better than HRC -- and either way the Democrats are going to win due to the electoral collage.

So right now the next POTUS is either Bernie or Hilary ... and if the rest of the country goes Bernie, Sanders will snag the nomination and White House.

After all, the Democrats start out of the gate with something like 243 electoral votes out of 270 to win. The GOP faces an uphill battle for every single electoral vote.

Another thing people don't realize is that she's running out of money! She doesn't have an army of regular people sending her 10 bucks when they are happy or ticked off. An army that grows every day. Her donors are tapped out, and if she taps the PACS too hard it makes her look awful compared to him. He's going to be able to spend a FORTUNE on ads. All with our money.

Obama kind of came out of nowhere real fast. Remember that.

Exactly and that is what worries me.

They don't see the reality that she has the system behind her and while Bernie is winning a few battles she is winning the war.

No she didn't. Because as Mystik mentioned the super delegates don't count for squat right now as much as the MSM and establishment would like people to believe it does. When Bernie wins more pledged delegates we'll see which way the wind blows.

And another bonus is he'll have done it 100% without the media. God so delicious.

Obama in 08 also had a much more broader coalition supporting him than Sanders currently has.

Clinton has the minority support locked up this time around and she's not distancing herself away from Obama.

Sanders does a good job of appealing to the white blue collar class and young voters which love populist ideas.

She IN NO WAY has the minority vote locked. He's doing great among latinos and getting better with blacks all the time. Something else no one is talking about is Bernie is also going to take all the delegates for Democrats Abroad.

posted on Mar, 9 2016 @ 12:12 AM
link
Either way good win for Bernie, if he does end up the nominee I will no doubt be volunteering for him and voting for him in November

Right, basically the MSM is trying to convince everyone that it's a lopsided race by artificially inflating Clinton's numbers.

The super delegate numbers shouldn't to anyone's totals right now. They only matter in the event of a contested convention.

The pledged delegate count should really be the one that's shown, but the media wants to discourage people on the fence about Bernie into voting for Clinton. They want those people on the edge to give up on Bernie.

According to Wikipedia, the ACTUAL numbers are:

If Sanders winds up winning more pledged delegates by convention time, those "super delegates" won't be so loyal to Clinton. NEVER in the history of the party have the super delegates gone against the popular vote and hijacked a nomination. They won't.

At this early in the primaries ... and considering all the "sure wins" are over for Clinton, things may not be looking so bleak for Sanders as the mainstream media WANTS everyone to believe.


Why does Bernie need such big margins if the remaining states are "winner-take-all-delegates"?

Hmm let me see. I think he will win Ohio as well and Idaho. I gotta look at the details some more before I call any more states but I'm comfortable with those two for now.